The first time I heard about Sachin Tendulkar was from Hemant Waingankar. It was around 1987. I had left for Australia in 1985 and I had met Hemant when I visited Mumbai. Hemant told be about this exceptionally talented boy — a freak. 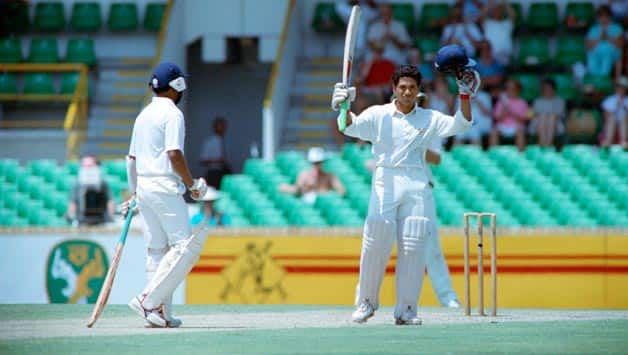 The first time I heard about Sachin Tendulkar was from Hemant Waingankar. It was around 1987. I had left for Australia in 1985 and I had met Hemant when I visited Mumbai. Hemant told be about this exceptionally talented boy — a freak.

My first Tendulkar moment was unbelievable. It was the Sydney Test in 1992 where he got a wonderful hundred and had the partnership with Ravi [Shastri]. It was Shane Warne‘s first game. I was privileged to be in the dressing room, thanks to Chandu [Chandrakant] Pandit and Dilip Vengsarkar.

At Adelaide, I was introduced to Tendulkar by Sanjay Manjrekar. I remember meeting him in the Hilton Hotel lobby. He was truly exceptional. He demonstrated a great sense of poise and maturity at a very young age. He showed amazing temperament and played a wonderful innings. He was shy and respectful. I could tell he was brought up right. That hasn’t changed till today. He always makes eye contact and greets me whenever we meet.

All of us including Ravi, Sanjay, Sunny [Sunil Gavaskar] etc. knew that he was someone special. There was a presence and awareness about Sachin around the cricket environment.  I keep getting back to his level of maturity which is his amazing trait. It is inherent.  It is not something he has cultivated. His behaviour and reactions have always been mature and exemplary and his cricketing skills are divine!

He is the nearest thing to the Greatest — Sir Donald Bradman. That sums it up. He has brought tremendous joy and a sense of self belief to Indian sports. His amazing ability to withstand pressure, particularly in India and perform at the top level worldwide, has the hallmark of genius.  He will be remembered as the one of the greatest of his generation, along with Jacques Kallis. Their performances are simply mind boggling. More importantly, he is respected and revered around the world for the way he conducts himself.  He has kept himself above petty politics and his contribution to Indian cricket is simply awesome

When my brother [Ashok Mankad] was the coach of the Mumbai team, he told me that during a particularly tense Ranji final against Bengal [in 2006-07] Sachin came up to him and said “Kaka, we are going to win this game. I will see us through.” Sachin’s demeanour was focused and there was determination on his face that was hitherto unseen, according to Ashokbhai. After the game, there was no fanfare, no “I told you so”. Sachin went about his business on his usual calm manner. Ashokbhai was blown away by this man!

His hundred against Australia at Perth on his first tour Down Under is one of his most memorable hundreds for me. That was an exceptional innings on the fast and bouncy WACA wicket. There was a stamp of authority and class all over in that innings. Sachin stood head and shoulders above anyone else from either side in that game.

Life goes on, and cricket will also go on. When Sunil retired, there was a void for some time and Sachin emerged. Fate will have something in store for Indian cricket. As the saying goes, “What goes around, comes around.”

—   As told to Sudatta Mukherjee

(Rahul Mankad played First-Class cricket for Mumbai between 1972-85 before migrating to Australia where he was Regional Director, South Asia and Middle East at Griffith University and Marketing Manager at The University of Queensland. He is last of the three son of the legendary Vinoo Mankad)