Sachin Tendulkar retirement: It will be tragic if authorities buckle under pressure and force the maestro

With voices clamouring for Sachin Tendulkar’s retirement, we continue to hear that he will perhaps be coaxed into hanging up his boots. Along with it the perennially volatile, headline parroting populace continue their chants, asking him to emulate Ricky Ponting and Rahul Dravid and call it a day as those two masters had done. Arunabha Sengupta checks the numbers — those perennial dampeners of such good stories — and argues why the master should still be allowed to retire on his own terms. 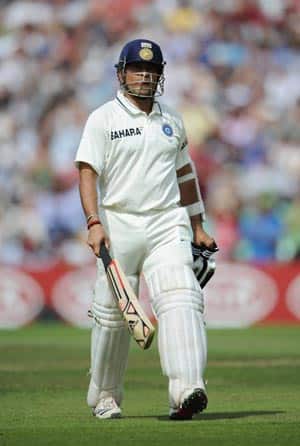 Times have been tough for Sachin Tendulkar as he averages just 33.17 in 21 Tests since the tour to South Africa in 2010-11. If the figures lead him to introspection and eventually retirement, it is justifiable. At the end of the day, it should be his decision alone © Getty Images

With voices clamouring for Sachin Tendulkar’s retirement, we continue to hear that he will perhaps be coaxed into hanging up his boots. Along with it the perennially volatile, headline parroting populace continue their chants, asking him to emulate Ricky Ponting and Rahul Dravid and call it a day as those two masters had done. Arunabha Sengupta checks the numbers — those perennial dampeners of such good stories — and argues why the master should still be allowed to retire on his own terms.

When India played Australia in 2011-12, the world witnessed the rare confluence of the three greatest accumulators of Test runs in the history of the game, Sachin Tendulkar, Rahul Dravid and Ricky Ponting, appearing together in the same series.

Such a meeting of masters had never taken place since the very early days of Test cricket when Clem Hill, Syd Gregory, Archie MacLaren and Joe Darling, appeared together at The Oval for the famous 1902 Test match. But that was an era when the highest aggregate in Test matches hovered around 1500 or so. The 2011-12 series saw an unprecedented mountain of runs been brought into a Test match — the combined aggregate was something like 41,000 runs.

Just after the Australian series, after a spate of rather low scores Down Under, Rahul Dravid called it a day. Ricky Ponting tarried for another season before he too found the passage of time a considerably more formidable a foe than the many, many hostile bowlers he had overcome in his prime.

Only Sachin Tendulkar still continues. The times have been tough, the runs have refused to flow from the once supreme bat. And as he lingers on during his final few days, speculations and conjectures continue to be rife about his retirement. Every day we hear of stories — some true, most fabricated — of gradual pressure being built on the man to hang up those huge boots. Those very boots that have plodded across unknown terrains over two decades — discovering trails that were unknown to the world when he started out on his journey.

Whether Tendulkar needs to retire or not is a matter of divided opinion which is slowly growing lopsided. There are accumulating reasons for moving on, while there still remain some convincing reasons for his continuation. We have no intention of going into the same debates that we have seen contested in every discussion forum for the last couple of years, hammering out pros and cons which have become stale with repetition.

What we do want to demonstrate is that the great man needs to be left alone to make his own decision. Additionally, we want to show the ridiculousness of the argument that Tendulkar needs to follow the example of timely retirement set by Dravid and Ponting.

We want to show that Dravid and Ponting, both greatest of batsmen, had actually been given an extended leeway that they fully deserved and made full utilisation of it — more than Tendulkar has ever done. And we want to argue that Tendulkar too needs to be given his space for an attempt at rediscovery and a personal decision.
Errors of perception

The popular perception is that Dravid and Ponting bowed out with grace and dignity and allowed the next generation to take over while they were still at the top of their game. Supposedly Tendulkar’s selfishness does not allow him to follow their excellent examples.

And as usual, such perceptions and mass mindset have little to do with the underlying actual facts before making voicing these assertions from the top of the armchairs. With passing time and fading memories, the legends around the supposed noble examples of Ponting and Dravid have gained in stature and prominence till such fabrications have taken the form of gospel. Rosy retrospection is possible even when viewing the immediate past — such is the appeal of the instantaneous these days, powered by the reiterating capabilities of the social media.

Now let us take a look at what the figures say. The eloquent tale told by numbers — those irritating trails left by cricketers that ruin so many of these great stories of cricket.

Indeed, the peeve against Tendulkar is that he has not been among runs for the last few Tests. His last hundred was against South Africa at Durban in early 2011. Since then, it has been a tale of struggle. He has scored 1145 runs in 21 Tests at 31.80. By his standards, or even by the yardstick of decent middle-order batsmen of India, it is a sorry tale. And if that leads him to introspection and ultimately retirement, that is fully justifiable.

But, it needs to be his decision. The two worthy gentlemen we talked about also went through similar, and worse, troughs and were allowed a free hand to make their own call. Tendulkar, the greatest batsman of his era, deserves at least similar handling.

In the last 50 Tests of his career over four and a half years, Ponting limped his way to 3,336 runs at 38.34.
His average plummeted from 58.37 to 51.85.  For the last two years, he managed 1128 runs in 20 Tests at 33.17, even this average boosted by a double hundred and a hundred against a beleaguered Indian attack. He did go out on his own volition, but not before he had been given enough leeway to fail season after season for as many as 50 Tests.

In stark contrast, in his last 50 Tests, Sachin Tendulkar has 4,016 runs at 50.13 with 12 hundreds and 18 fifties. If indeed he is to follow the ‘illustrious’ example of Ponting, he has 29 Tests left to walk out and fail before a call can be made.

Now, let us come to Dravid. Did he really leave the game without lingering on when his form deserted him?

The answer cannot be more emphatically negative. He was a great player, make no mistake about that, but his gentlemanly image sometimes does create a halo effect around his career, dazzling the eyes, and keeping some protracted troughs away from view.

Yes, he did have an amazing tour of England in the summer of 2011, scoring three hundreds and being the only Indian batsman to stand up to the challenges of swing during that disastrous tour. With our memories generally sticking to the last few infinitesimal seconds, we tend to dwell on the England success followed by the sequence of bowled dismissals in Australia and finally his retirement, concluding that he was in sublime form, lost his touch momentarily and felt age was catching up, and retired with his head held high.

Only, this elaborate romantic yarn is only partially true.

It was a period when all those fangs which are currently bared for Tendulkar’s old heels had enjoyed three wonderful hunting seasons snapping at the tired limbs of another Indian great.

Yes, Dravid did come back to form — getting runs against New Zealand and England in the most glorious fashion, but that was because he was given the long, long rope to work on his game during those three interim years.

He did return to his run-scoring ways at the age of 37 and called quits after another poor series in Australia.

Busting the myths about Dravid and Ponting

Now, is there a fool-proof reason to believe that Tendulkar will not suddenly get back into his habit of tall scores — much like Dravid did after the barren 2006-2009 phase?

So, when we look at the numbers in detail, we find that both Ponting and Dravid had actually stuck around in their advancing years even when the runs had refused to come for a long long time — the same trait people find so objectionable in Tendulkar now. And they retired on their own terms.

Both Dravid and Ponting had earned that right of working their way through poor form by doing yeoman’s service to the nation. If anything, Tendulkar’s rights in that respect are at least as much, if not considerably more.

It is curious that the man who has blazed new trails and opened up new horizons in the realms of batsmanship with his wondrous willow is now being viciously grudged his minute personal space.

It will indeed be tragedy if Tendulkar is not allowed the same latitude extended to the other two and is hastened into retirement because the decision makers wilt under public pressure — pressure created by half-baked perceptions, un-informed analysis and couch wisdom.