Sachin Tendulkar is more than a sporting legend. He is entwined with the psyche of more than a generation in this enormous country, India. Arunabha Sengupta just scratches the surface of what he means to an Indian. 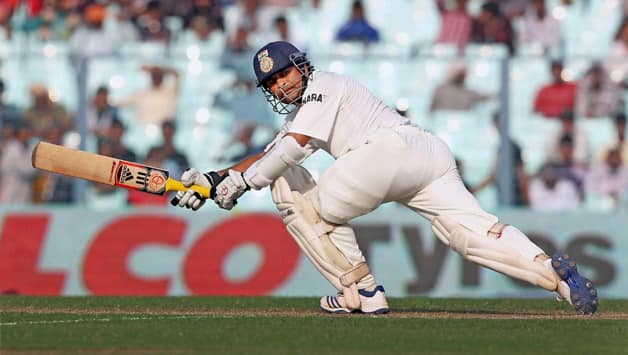 Sachin Tendulkar is more than a sporting legend. He is entwined with the psyche of more than a generation in this enormous country, India. Arunabha Sengupta just scratches the surface of what he means to an Indian.

A teenager surreptitiously sneaking out of the forbidding confines of a Roman Catholic institution —enticed by whispers. A 16-year old had just hit Richard Hadlee inside out over cover for six in a double-wicket tournament.

The youth, calling in sick in the aftermath of the desert storm — the system unable to digest the swirling cocktail of excitement, euphoria and ecstasy.

The painful anniversary dinner where the best efforts cannot bring forth a smile — India managed to lose by 12 runs after Sachin Tendulkar battled agonising back pain to score 136. For some reason, there are spasms in his own lumbo-sacral region as he sits in the plush chair in the restaurant.

As he drives through the streets of the metropolis, his three-year old daughter points at a swanky Fiat Paleo and informs, “That’s Sachin Tendulkar’s car”.

A celebration of birth in the family is derailed, because Shoaib Akhtar is being demolished at Centurion. When he asks his cousin about the name of his new-born nephew, the proud mother answers, “Sachin.”

The pain sears through his arm every time the most discussed elbow in history figures in the news reports. The heart pounds with trepidation every time he reads about possible retirement. He has not known adult life without Sachin Tendulkar.

The last call is announced for the second time, but Tendulkar is in his nineties — India chasing down 387 at Chennai. The plane can take a hike.

At the end of a business presentation, the client from the veritable epicentre of cricket-agnostic continental Europe looks at him. The austere mask of professionalism is pierced by a mischief-tinged smile. “I don’t know what I am talking about, but you may be able to figure out,” he taps his iPad. “I just read on CNN that Sachin Tendulkar has got a hundred.”

The last phase of pain as the ageing master comes to terms with his decline, accompanied by the boiling rage that bubbles up when encountering infinite and impatient ingratitude around the country.

And finally the colossal void that engulfs the unbelieving soul as the blazing brilliance of more than two decades sets on the cricket grounds around the world. It is like waking up in the unknown, in a world that has never existed — overnight it is a new way of living.

The story of a generation and more. A saga of sentiments, faith, hope and passion intertwined with the epic journey of one man.

More than a cricketing great

Tendulkar is so much more than just a master batsman, the greatest the country has ever produced. He is ingrained in the essence of the land — part of the spirit and the psyche of the nation, a life force for millions, the fundament around which sense of well being is structured for uncountable souls.

Cricket has for long been a path to national pride. Emotions erupted whenever the team beat their erstwhile rulers or the strongest nations or hostile neighbours. Every stalwart produced by the land underlined that India could be as good as the best. Wins were rare, but even in defeat Indians rejoiced in the gallantry of a few.

And then came Tendulkar. A prodigy, a phenomenon. It was a quantum leap for Indian cricket. No longer was the goal restricted to being as good as the others. Tendulkar was way better than the best of them. India could be more than just a force to reckon with, she could be the leader.

The arrival of Tendulkar coincided with the opening up of the economy and India becoming a player on the world scene. And from 1992-93, in cricket they went through an unprecedented sequence of wins. In cricketing and non-cricketing spheres India emerged as a major player. And Tendulkar was the man who promised that India could be a winner in the world.

For much of this time Tendulkar was the one man army, the destroyer, the man who won at home and waged lone battles abroad. Hopes soared with his deeds and dreams were chiselled into shape by his willow. He became omnipresent — smiling from billboards, known to fans and the rest alike. The first face a child grew to recognise.

With years he modified his game other middle order masters emerged and Anil Kumble grew in stature. India won more with as the team grew from strength to strength — enlarging the gap created by the Tendulkar factor. With other experts hands lending muscle to the batting, the great man accordingly changed from the demolisher became the accumulator, the run machine, the evergreen master, the senior statesman.

Each transition was a paradigm shift for the multitude. The intolerance of the nation came to the fore often enough whenever the body suffered from relentless action. But the master battled on, resurfacing in new incarnations, rediscovering himself again and again, every manifestation emerging near the top of the batting charts.

All this while he conquered peaks hitherto unknown to cricketing cartographers, and with it the Tendulkar legend grew. He pervaded the spirit of the country.

The essence of Tendulkar

When Tendulkar was progressing to the first double hundred ever scored in One-Day Internationals, and the nation had come to a virtual standstill, a friend touring India — a Frenchman — asked me, “What is it about this little man? What is this craze I see all across India?”

My reply was long and poetic, dripping with passion, rhetoric and dumbed down cricketing terms. I asked him to think about the reactions generated in his land by Zinedine Zidane and to multiply it by several thousand. That would give an estimate of what Tendulkar means to an Indian.

He shook his head in response, observing that this was another of the many mysteries of India that would forever be beyond an outsider. And without understanding this phenomenon India would also remain unknown.

True, Tendulkar is much more than a mere sporting superstar. Never has any sporting hero captured the imagination of the country in such an all-encompassing wave. He is the bulwark around which Indian cricket has evolved, the platform on which lives of more than a generation have shaped. India cannot be understood without getting to know him.

And as he walks away from the middle for the last time, many many dreams of the nation will come unshackled from the vintage vehicle that had carried them so long. The pain of separation can indeed be proverbially healed by time, but given the years he has carried the country, the period of convalescence stand to be protracted as well.

But, what about the void that is left in the wake of his departure — not just in the gigantic hole in themiddle order, but in the entire mental make-up of a population?

That will remain forever. As the trail left by this giant river of greatness that has flown in the landscape of Indian cricket. So is the enormous indelible mark that he left on the game.