Sachin Tendulkar has probably played his final innings in his 200th Test. Arunabha Sengupta looks back at the second morning which saw some vintage snatches of the master. 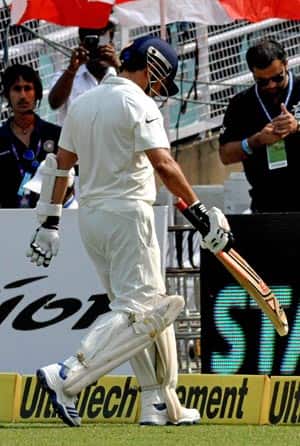 Sachin Tendulkar has probably played his final innings in his 200th Test. Arunabha Sengupta looks back at the second morning which saw some vintage snatches of the master.

There were the same jaunty strides. The couple of quick steps and the bat swung in a straight arc in shadow practice. The last buoyant saunter over a twenty-two-yard kingdom that had been indisputably his for nearly two decades.

The cuts flowed, two straight drives harked us back to an era when he had reigned in his pomp, beyond the frailties of the lesser mortals.

There was the sweep, played delicately late, the paddle, and then a gem of a drive through the covers. One drive scorched past Tino Best and rocketed to the fence, bringing up his half century. The bat was raised in the customary fashion, at ease with the gift of sublime greatness. The strokes continued, delectable and delightful.

In between there were flirtations. Best continued pitching short, and the cheeky schoolboy reappeared, trying to use the pace to send them screeching over the slips.

It was fascinating — because after what seemed ages Sachin Tendulkar was enjoying his batting again.

All the burden of expectation, translated into infinite stress on his shoulders, seemed to have been transferred. To his wife who sat tense, her heart thudding at every stroke. To the thousands in the stadium who had ventured beyond the edge of their seats — each and every one on their feet, cheering, hoping, dreading that every ball could be the last one saw the master play. To the millions glued to the television screens, to the web streaming sites, unable to move an inch, lest some quirky ‘Butterfly Effect’ affected the genius at the wicket.

And then it happened. A flirtatious latish cut off Narsingh Deonarine landed in the hands of Darren Sammy. Tendulkar had to go. Had to leave for what seems the final time. The 24-year era had ended.

There was hushed silence, the pause in the music of time which marks the end of one of the greatest rhapsodies. And then, as he walked back, there was the applause — thanking the greatest entertainer of modern times for the priceless moments of nearly a quarter of a century.

He paused once, turned around and waved his bat. He knew that there might not be the opportunity to get back into the middle once more. And then he disappeared into the solace of the pavilion, leaving millions wondering about the permanence of life and fumbling to find a meaning of it all.

There may not be another innings by Sachin Tendulkar. And there will never be another like him.

Thank you Sachin. Thank you for adding that vital ingredient that allows us to discover the ecstasy that is life.

Sachin Tendulkar dismissed for 74; India 282/3 at lunch on Day Two of 2nd Test against West Indies