When 14-year-old Sachin Tendulkar (326 not out) and Vinod Kambli (349 not out) stitched together their famous of 664 runs — a then world record for any wicket in any form of cricket — for Shardashram Vidyamandir against St Xavier’s High School (Fort) in the 1988 Harris Shield semi-final, the man waiting patiently for his turn to bat in the pavilion was Amol Muzumdar, who has since emerged as a titan in India’s First-Class cricket history. In the following piece, Muzumdar recalls some interesting anecdotes from Tendulkar’s formative years in cricket. 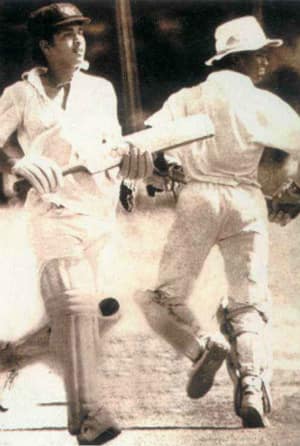 Sachin Tendulkar (left) and Vinod Kambli during their marathon 664-runpartnership (Photo courtesy: The Making of a Cricketer by Ajit Tendulkar)

When 14-year-old Sachin Tendulkar (326 not out) and Vinod Kambli (349 not out) stitched together their famous of 664 runs — a then world record for any wicket in any form of cricket — for Shardashram Vidyamandir against St Xavier’s High School (Fort) in the 1988 Harris Shield semi-final, the man waiting patiently for his turn to bat in the pavilion was Amol Muzumdar, who has since emerged as a titan in India’s First-Class cricket history. In the following piece, Muzumdar recalls some interesting anecdotes from Tendulkar’s formative years in cricket.

Right since our school days, Sachin Tendulkar was extremely committed to cricket. His passion and commitment to the game was unparalleled even then and the memories of those days hold a very special place in our hearts. All the kids at the Sharadashram Vidyamandir knew that there was this special one amongst us.

Coming all the way to Shivaji Park (Dadar) to practice every day was a hassle for us as we lived in the suburbs. I lived in Santa Cruz while Sachin was in Bandra. So, we opted to stay close to where we practiced and Sachin moved in [with his relatives] at Indravadan in Dadar. The hours we put in at [Ramakant] Achrekar sir’s nets were incredible. We used to start practicing at 7.00 in the morning and then finish at 10.00 am, when we would start playing a match. That game would then go on till 4.00 pm in the evening, after which we used to practice up to sunset around 7.00 pm. That was simply phenomenal. At that young age, all we used to do is eat, sleep and drink cricket then. We made a lot of sacrifices and had no family life; there was nothing beyond cricket.

During the world record 664-run partnership between Vinod [Kambli] and Sachin in a Harris Shield game, I was padded up to bat next. Vinod had gone in at No 3, Sachin was at No 4, while I was slated to come in at No 5. When they started off, I had a few butterflies in my stomach as I waited for my chance to bat. As the partnership built, there was a bit of curiosity as to what is going on. During the drinks or lunch break, I would go into the ground and just have a small knock.

Later, that curiosity turned into a bit of irritation — as a kid you want to go out there and play. Once I realised I wouldn’t get to bat, I decided to enjoy their game. Little did we know then that it was a world record and only found out two days later. I feel proud to be a part of it, although I was only padded up waiting for my turn to bat next in the dressing room.

Two days after the world record partnership, we had a Giles Shield match. Sachin and I got hundreds in that game against Anjuman-I-Islam. Believe me, as a 14-year-old, I had never witnessed a crowd as big as the massive one that turned up that day. I was a bit shell-shocked, but Sachin was in control. We knew that here was a guy who could pull crowds. The word then spread around that he was batting and they all came to watch him. We were chasing a huge 380-plus score and we got there with only three wickets down. After the game, Sachin initiated a plan to go for a movie — Top Gun. My father was at the ground and Sachin quietly approached him to take permission. We watched the movie from 12 noon to 3.00 pm and then took the train to Dadar to resume practice.

Then, there is a funny incident that I remember. We were playing St Mary’s in the Giles Shield final. Sachin was already a big name by then in the Mumbai cricketing circles and it was a rare occasion when he failed — he scored only 14. There was a huge headline in the next day’s newspaper, “St Mary’s in driver’s seat as Tendulkar fails“. I still remember that because it made an impression on me as here was my teammate who failed, but still made the headlines! Such was his impact then.

In 1988, when Sachin made his Ranji Trophy debut against Gujarat at the Wankhede Stadium, I went to watch the game with Achrekar sir. We were thrilled that someone amongst us had broken into a strong Mumbai side and scored a hundred on debut. A day after the Ranji game got over, he came to play a Harris Shield school game against Bandra Urdu School. The buzz was incredible. People came from offices to watch him play as he was hitting the ball all over. In two and a half hours, he scored 192; it was like a hurricane. I remember when he got out, all the eleven players in the opposition sat where they were and didn’t have the energy to celebrate. It was as if something had hit them. Sachin returning to play for school after his Ranji debut was actually a dream come true for us. He was an example for us and looking at him, I started aiming to play beyond school cricket.

Sachin was a bit of a prankster. Once, during an Under-15 tour, he applied balm all over Atul Ranade’s face while he was sleeping. When Atul woke up, he was literally crying as his face was red and he had to dip it in a bucket of water.

On another occasion, all the cricketers at school were pulled out of class and asked to go home. We only saw it as an opportunity to leave school, but Sachin suggested that we go to Dadar Chowpaty and have a good time. So we went there and played rubber-ball cricket. I don’t think our parents knew we missed school.

One of the abiding memories I have is of the double hundred he got for Mumbai against Australia at Brabourne Stadium in 1998. I have never seen such crisp batting and I was lucky to witness it from the other end.

Then, there was this one occasion when I was going through a tough time and Sachin noticed it without me telling him. He just came up to me before a Ranji Trophy game and said, “Fight it out!” I went on to get a ton in that game and that was because he motivated me at the right time. I owe him that ton.

Because of Sachin, we are all here and I personally owe a lot to him. He was the one I looked up to ever since I held a bat. We didn’t try to emulate him, but only tried to follow his footsteps. Now that he has decided to quit the game, I don’t know if I will watch cricket for a while at least. He is one of the reasons I started playing and continued to do so. He has set a high benchmark and is amongst the greatest cricketers the world has seen. We should be happy and celebrate the fact that he has been one amongst us, and a part of our generation. We should be thankful to God that we have seen him bat.

There will be generations which will ask, “Did you watch Tendulkar bat?”

(Amol Muzumdar is a former India under-19 vice-captain who played alongside Sourav Ganguly and Rahul Dravid for India A. With over 30 hundreds, 11000 thousand runs at an average of close to 50, he has been one of the giants of Indian First-Class cricket and, arguably, the unluckiest of the lot never to have player for the national senior side. Muzumdar, who formed a famed troika for Sharadashram with Sachin Tendulkar and Vinod Kambli, is still fit and still scores runs by the tons in domestic cricket)

Jacques Kallis: A phenomenal cricketing giant of all time