Do 51 hundreds in Tests and 49 in ODIs really matter? Why should the number 100 be given so much importance? Arunabha Sengupta demonstrates that changing the milestone to other figures, or even changing our number system by adding or removing fingers from our hands, do not diminish the genius of Sachin Tendulkar. 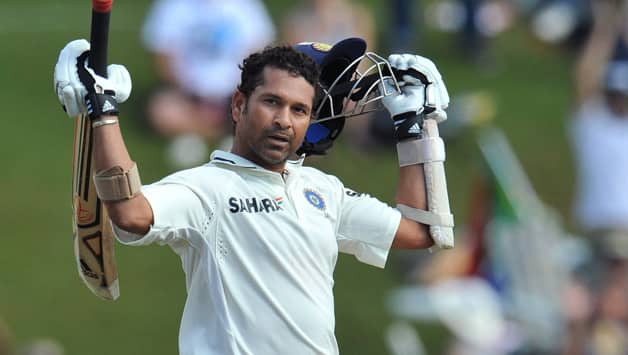 Do 51 hundreds in Tests and 49 in ODIs really matter? Why should the number 100 be given so much importance? Arunabha Sengupta demonstrates that changing the milestone to other figures, or even changing our number system by adding or removing fingers from our hands, do not diminish the genius of Sachin Tendulkar.

“It is not important how many centuries one scores.”

“The figure under the centuries column is not an indicator of greatness.”

There have been many attempts to downplay and sometimes trivialise Sachin Tendulkar’s monumental achievements – especially the 51 hundreds in Tests and 49 in ODIs.

Yes, often these are claims laced with ignorance — such as ‘Tendulkar scoring  a hundred results in defeats.’ It does not take much to look at the statistics and deduce the folly of these statements, but then, riding on perceptions prejudices carry their own perverse pleasures.

However, we cannot ignore one particular question — why attach all this importance to a number such as 100? Why should 100 be a landmark and an innings of 99 or 97 be considered relatively insignificant?

Of course, even a brief innings can be as important to a team’s cause. Wally Hammond’s 29 not out at Bridgetown in 1934-35 was perhaps far more crucial than some of his double hundreds. So were Tendulkar’s 98 at Centurion against Pakistan or the 85 against West Indies at Wankhede in 1994. A relevance of a knock in the context of a match is way more complicated than a tabulation of number of hundreds.

But, the question about the relevance of a 100 as a landmark indeed sets one thinking.

Although it is preposterous to even make such a claim about Tendulkar, there have been instances when a hundred has satisfied batsmen, giving them the feeling that their job has been performed.

Obviously 100 is important because with it, the score crosses over from two digits to three in our counting system, making it a major milestone — just as we look at 1,000 or 10,000 as landmarks when it comes to aggregates.

If we dig deeper, we discover that 100 assumes such an important dimension because of our fingers.

Human beings have historically used their fingers to count — hence the term digits. And since we have ten fingers, we count with a numerical base of 10, otherwise known as the decimal system.

There are aberrations. The Yuki language in California and the Pamean languages in Mexico, for instance, use the base eight or octal system because the speakers count using the spaces between their fingers rather than the fingers themselves. But in general, ten fingers in our hands make the number100 profoundly important.

Now what if 100 had not been the landmark? Would Tendulkar’s records still stand as the best?

Let us think of alternative universes in which human beings did not have five fingers in each hand, but four or six. The ways of counting would have definitely been different in such worlds. We will ignore for a while that batting, bowling and fielding might have been drastically different arts with the addition or reduction of fingers. Let us just focus on how Tendulkar would measure up with his numbers in such scenarios with their modified counting systems.

If human beings had four fingers in each hand, we would almost definitely have counted with a base eight or octal system. The numbers would then have been 0,1,2 … 7 and then we would stumble to 10 — which would be equivalent to ‘8’ in the decimal system. And in such a number system, 100 be reached when the score was 64 on the decimal scale. So, every time a batsman scored beyond 64, it would be considered a century — only, if we look at the etymology it could be known as a different name.

We still find Sachin Tendulkar towering over other batsmen if the century criterion is brought down to 64.

What if we had eight fingers and not ten?


As may be expected, when we consider the number of octal 100s in ODIs, Tendulkar stands head and shoulders, almost waist above the others.

What if we had eight fingers and not ten?

Similarly, if we had six fingers in each hand, the number system would have used 12 as the base. And 100 in that method of counting would be equivalent to 144 in the decimal system.

What happens when we try to evaluate Tendulkar’s collection of 100s in the base-12 or duo-decimal system?

We find that he leads here as well, in both forms of the game.


So, did Tendulkar play for hundreds — as so many of his critics have periodically claimed? If he indeed did so, he somehow managed it in a number agnostic way! Even if the definition of the milestone is tampered with, tweaked or overhauled, he still ends up on top. Even if we add or remove a finger from the human hand, thereby changing the system of thought and counting, he finishes on top of the lists.

And even in such an alternative world, with an additional finger or without an existing one, our hands would continue to rise in salute to the genius.

With the ten fingers in our hands that we do have in the current scope of the world, it would make more sense if we counted our immense blessings — at having witnessed this master batsman traverse through his splendid career during our lifetimes.