Why this uncontrolled hype about Sachin Tendulkar’s 100th international century? What does it mean to fans of Indian cricket? And how is the man himself bearing the cross of greatness? Arunabha Sengupta poses the questions to Cognitive Psychologist Dr. Suprakash Roy

“That’s a cliché that has been squeezed to the limits to flavour articles, blogs, opinions and status messages. All the meaning that remains is the bitterness of journalistic overuse and cricketing overdose,” I said rather uncharitably, and I did have my reasons.

After the much-talked about study conducted with Dr. Suprakash Roy, cognitive psychologist affiliated to the Leiden Medisch Centrum, I had contacted him to throw light on the extraordinary madness that is now revolving around Sachin Tendulkar’s 100th international hundred. Dr Roy responded with the oft-repeated slogan of the modern Indian cricket fan, “In India, cricket is a religion and Tendulkar is God.”

The academic smiled in his trademark manner. “Believe me, that’s the only explanation for the craziness that you see. The enormous pressure that has been built up is the result of reaching for the throne of God.”

I was puzzled. The psychologist had always been a keen student of the game, and I had not expected him to start with theological criticism of the fan created-status of Sachin Tendulkar. He smiled at the confusion that rippled across my face.

“Let me ask you a question. When you look at the hits on cricket articles across cyberspace, do you detect a pattern? Is there a method in which chaotic clicks are distributed?”

I wondered. “The articles dealing with particular cricketers – especially the big names – do get the highest hits… More so if there is a reality show sort of angle.”

“Exactly! While the articles dealing with facts and figures that would interest a real cricket lover lag behind, and some that discuss the finer points of technique or interesting anecdotes of history languish at the bottom, don’t they?”

I nodded assent. It definitely was true.

“You see, cricket is a national passion in India – in the same elevated echelon as Bollywood. And if you look at the Indian psyche, the focus in both the domains is on the stars.

“In the film world, how many care about the quality of cinema? It is the name of the star that matters. Mediocre films made with big names will dominate discussions and box office, while excellent low profile films will drown into oblivion after a few screenings. It is our national characteristic to create a pantheon of gods and develop separate communities of cult worshippers around them.

“We are always bothered about who is the greater god among all the glittering stars that govern our lives. That is why I mentioned the much-used cliché, with a caveat. Sachin Tendulkar is not the only god in Indian cricket. There are several. And the worship reaches the levels of religious fervour and even fundamentalism. So the cliché is not all rhetoric.”

“Yes. Where followers cluster around the image of gods created by themselves. They carry absolute conviction, bestowing the mortal men they choose to follow with powers dipped in several dollops of imagination.”

Characteristics of the cricket fanatic

“And you believe Sachin Tendulkar is a victim of this symptom?”

The professor smiled. “Au contraire.  There is a difference, a huge one. But I will come to that in due course. Let me first explain national fanaticism when it comes to cricket.

“In Indian, cricket fandom, the attributes of the worshippers share many non-trivial similarities with the religious fundamentalists and cult worshippers.

“The performance of the icon becomes an ingredient of well being for the follower. How the idol is perceived in his immediate surroundings have a huge bearing on the meaning of his life.

“Along with this there are traits of unwarranted inference, susceptibility to fallacious arguments, all or nothing dichotomous thinking, immediate labelling of discerning critics as hater or lover, selective filter of facts associated with the hero, magnification of powers, minimisation of evidence which show the idol in poor light. And finally, violent reactions when the sanctity of their fundamental beliefs is challenged.”

“Tell me about it. A few days earlier I had questioned certain comments made by an ex-cricketer in my column. It was like stepping on a cyber-mine. I was attacked in the comments section as well as the personal space of my social networking accounts. Downright abuse in most cases, and several warnings, especially, not to use statistics to make my point. Well, it was almost as if I was a heretic being stoned in the town square for a slight against the God.”

Dr. Roy’s eyes became round as he goggled at me.

“You dared to use statistics? That is the gravest of offences. Galileo was persecuted for his scientific efforts, and you, mere mortal, tried to emulate him? Don’t you learn anything from history?

“You see, when the fundamentalist follower comes across an argument which is logical and shatters his world view, he undergoes something known as cognitive dissonance, a phrase coined by social psychologist Leon Festinger in his 1956 book When Prophecy Fails. The fundamentalist, by definition, holds certain truths to be gospel, and when you question them, the contradiction leads to anxiety that his perceptions will fall apart, and this in turn leads to violent denial, confusing, illogical counter arguments and aggression with the intent of humiliation. This has been studied in detail by Martin Marty and Scott Appleby in their seminal work The Glory and The Power.

“When you say to a Sachin worshipper that from the middle of 2004 to the end of 2006 he averaged a very ordinary 40.00, or tell a Dada (Sourav Ganguly) adherent that as captain he has never actually won a full series abroad other than in Zimbabwe and Bangladesh, it is sacrilege. It is like doubting the Great Flood by wondering where all the water came from and where it drained, or questioning the logistic challenges of getting an Australian kangaroo all the way to the Ark or wondering about the waste disposal system of the vessel.

“Strangely for Sachin, there is a cult of similar fundamentalist bashers, who would have the same aggressive reaction if you tell them that since 2007 he has been a colossus in the fourth innings.

“The parables that facts turn into when convoluted by fanaticism render them the quality of myth. Like the religious texts, they can be a fascinating account of spiritual experience in the aftermath of a heroic exploit, but can never be of historical or a scientific accuracy. Thus, statistics is taboo and the act of an infidel.

“With the social networks and other internet forums aiding and abetting pushbutton fanaticism, these fundamentalist followers can thrive on like-minded thought and indulge in crusades on cyberspace – without the dedication, sacrifice and physical exertions that were previously necessary for these pursuits.”

It made a lot of sense to me, but I was not sure what all this had to do with Tendulkar’s 100th international century. When I mentioned this, the good doctor smiled.

“I told you that with Sachin there is a difference. Because of the fanaticism that is associated with cricket, and because of his enormous footprint, and the mammoth stature of his achievement, this feat has taken the proportions of the second coming or the sighting of an avatar … in the frenzied minds. And to fan this fandom, if you will excuse the pun, there is endless hype and mind-numbing celebrations that have threatened to accompany the milestone, like the ridiculous promise to shower the man with 100 gold coins.

“And while one group awaits it as the event that will elevate them to ecstatic heights of spiritual experience, there is another that lies in wait, equally or more fanatic, licking their lips in anticipation of failure, which will enable them to cling on to their world view of Sachin as the one who buckles under the pressure of expectation.

“Both points of view are quite ridiculous. I mean someone who has scored 99 hundreds, 51 in Tests, does not need one more to prove his absolute mastery. And if one can manage 33,000 runs in international cricket, even if he retires with 99 hundreds, it will not diminish his greatness the tiniest bit. However, across the far and wide spaces of our land, where cricket is by far the only tie that binds countrymen, where each group deals with their euphoria or cognitive dissonance after every innings of the man, with these two clashing sentiments the pressure has been built up to a ridiculous level. Every innings has fanned the heat with the cognitive dissonance of two sides battling each other.”

This sure made more than enough sense. However, one particular point till rankled.

“And what did you mean by pressure built up by reaching for the throne of God? When has Sachin claimed … ?”

Dr. Roy allowed the serious academic demeanour to relax into a smile.

“That cut you to the quick, did it not? Dare I say I see some signs of the fan … of course you did not react violently when I spoke about his ordinary average from 2004 to 2006…”

“He was suffering from tennis elbow …”

“Of course he was. I will tell you what I meant. For every other demigod in India, there are mythological powers ascribed to otherwise mortal, sometimes brilliant men. While in Rajnikath’s case they become universal jokes, in the case of certain cricketers they are considered to be the Gospel.”

“Sachin’s problem is that he has himself to blame. Not the most loyal and blind of his fans, irrespective of his powers of imagination, could have played prophet and spoken of 100 centuries, 33,000 runs and so on … While for all others the esoteric powers have to be manufactured, Sachin dwarfs all such dreams and engineers his own limits with his breathtaking brilliance.

“And if you happen to be that sort of a genius in this country of ours, where our so-called passion for the game turns into fundamentalism, you are in for trouble. You keep defining new extremes of achievement, and they will create radically new dimensions of fan-frenzy, and as a result you have to deal with the lunacy associated with it.”

“And how do you think Sachin himself is coping with it?”

“I can’t say that without getting him on my couch, can I? For a mortal man, it cannot be anything but monumental pressure – especially with this series of heartbreaks. But, his last few scores read 91, 7, 76, 38, 94, 3, 73, 32. According to the second group of fanatics, this may depict someone out of form, but to me, a man of science, it is 414 runs at 51.75. I would say he is doing fine. He has managed 99 hundreds batting under the created pressure that tags anything under 100 as a failure. I guess he can go that extra 1%.

“And if the last couple of innings have been any indication, he is batting beautifully. So, let us just sit back and enjoy the game.” 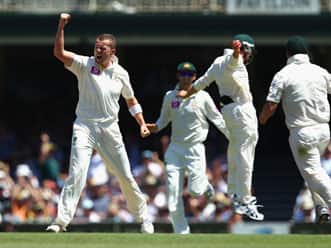