Enough and more have been said about Sachin Tendulkar’s extraordinary career and equally remarkable farewell at Mumbai’s Wankhede Stadium on Saturday. But as the reality that Tendulkar will no longer be a part of the Indian cricket team sinks in, one can’t help but marvel at how perfect an ending it was for the man who defined Indian cricket and the nation for nearly a quarter century. 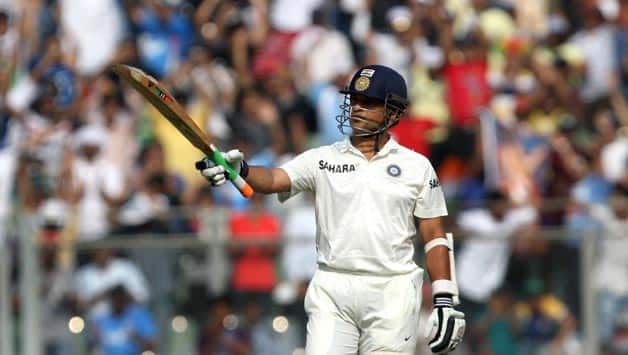 Sachin Tendulkar did not score a century in his farewell Test match, but his fluent 74 was replete with his trademark shots that have regaled fans over the years © IANS

Enough and more have been said about Sachin Tendulkar’s extraordinary career and equally remarkable farewell at Mumbai’s Wankhede Stadium on Saturday. But as the reality that Tendulkar will no longer be a part of the Indian cricket team sinks in, one can’t help but marvel at how perfect an ending it was for the man who defined Indian cricket and the nation for nearly a quarter century.

Tendulkar’s retirement was exceptional in how everything fell into place. Of course, he did not score a century, but his fluent 74 was replete with his trademark shots that have regaled fans over the years. The Indian cricket board helped out by hurriedly re-arranging the cricketing calendar and inviting over one of the weaker cricketing nations, West Indies, to play India, replacing what would surely have been a testing tour to South Africa which has now been postponed and shortened. This sucked any sort of competitiveness out of Tendulkar’s farewell series, something that was amply proved in the hopelessly one-sided matches.

That still did not detract from the poignancy of the occasion and Tendulkar’s farewell speech. Not known to have a way with words, Tendulkar spoke straight from the heart touching not only the 30,000 or so spectators at the ground but the millions glued to their television sets and computers. It was a closure that very few sportspersons can dream of. Indeed, how many get to choose their moment of retirement and that too at their home ground in front of adoring fans, family and friends?

As a point of comparison, the day after Tendulkar’s retirement, I dusted out a set of DVDs on Donald Bradman’s career. Just shy of 40 before Australia’s tour to England in 1948, Bradman had made up his mind to retire after the series and wrote in his book Farewell to Cricket that the tour was to be his “final opportunity to serve the game which has played such a big part in my life.” The last delivery of his Test career that Bradman faced at the packed Kennington Oval ground in London on August 14, 1948, when he was famously bowled by Eric Hollies for a duck, takes up only a few seconds of the grainy Movietone footage. Bradman, as was his wont, tucked his bat under his arm and walked away briskly without as much as a glance back.

At the end of the Test match, however, Bradman appeared in the players’ balcony and three cheers were raised from the knot of people at the ground. He did have another opportunity to give a farewell speech at the Savoy Hotel a few days later where he spoke of the need to make way for younger men and of having no regrets at all of sitting in the pavilion in future and serving the great game.

Bradman’s retirement, of course, happened in another era when the media presence was considerably smaller and the world was recovering from the ravages of the World War. With Tendulkar, though, it was destined to be different. While some believe he should have probably retired right after the 2011 World Cup, his farewell was bound to be like no other. Not even the great Bradman occupied a place in the nation’s collective psyche the way Tendulkar did. As one writer puts it, idolatry is an “Indian art form” and Tendulkar was the biggest cricketing god of them all.

So it wasn’t surprising that the occasion was turned into a mass spectacle.

While Bradman was from another age, it is instructive to note the differences in the way other Indian cricket stars stepped down. The two greatest superstars in the pre-Tendulkar era had contrasting ends. Sunil Gavaskar, when he retired in 1987, followed the advice of a fellow Mumbaikar Vijay Merchant to leave the field when “he would be asked ‘why’ rather than ‘why not’.”

When he decided to quit after the 1987 World Cup, he was playing as well as he ever had, having scored a brilliant 96 in his last innings against Pakistan on a spitting track, and playing uncharacteristically attacking cricket in one-dayers. The same can’t unfortunately be said of Kapil Dev. He long overstayed his welcome and eventually was dropped in 1994.

Of Tendulkar’s peers — the other three who made the Fab Four of Indian cricket — none got the kind of send-off that he did. Of the three, only Sourav Ganguly announced that he was retiring just before a home series against Australia in 2008, the decision made against the backdrop of rumours of him being dropped. He scored 85 in his last match and the final send-off took place in an eerily empty stadium at Nagpur. Both Rahul Dravid and VVS Laxman announced their retirement in 2012 in between series so there was no question of the kind of farewell that Sachin received. Spare a thought too for Virender Sehwag — possibly the greatest entertainer of our time — who not only has been dropped from the Indian team but is now struggling make runs for Delhi.

Indeed, few great sportspersons across the world have been as fortunate as Tendulkar in getting their retirement right. Australia’s Ricky Ponting did have a farewell Test against South Africa in 2012 but his performance with the bat through the series was uninspiring. In other sports even the great Pele unduly extended his career by playing for teams like the New York Cosmos. For players of his generation though, money was often a big factor for playing as long as they could.

But Michael Jordan, one of the greatest and richest basketball players of all time, just couldn’t get his retirement right. He retired more than once from active basketball and even took to baseball before returning back to his original vocation, a far lesser player.

The sports writer Peter Roebuck put it well when he said sportspersons are sometimes exposed and then eliminated before life’s taxes have been paid. Tendukar has happily enough escaped that fate. But despite the emotions swirling around Tendulkar’s retirement, as a cricket fan one would still have preferred him to bow out in a meaningful series, possibly against a South African pace attack on hostile pitches, rather than saying farewell in a made-to-order setting arranged by the Board of Control  for Cricket in India (BCCI).

(Dr Ronojoy Sen is a senior research fellow at the Institute for South Asian Studies and the Asia Research Institute, National University of Singapore. The above article first appeared in DNA)