Jawaharlal Nehru gave a stirring speech in a national broadcast from All India Radio, New Delhi, on January 30, 1948 — the day the nation lost the Mahatma Gandhi to an assassin’s bullets. Sudatta Mukherjee goes back 65 years in time to that inspiring speech by Pandit Nehru and correlates it to the monumental feeling of loss following Sachin Tendulkar’s exit from international cricket. 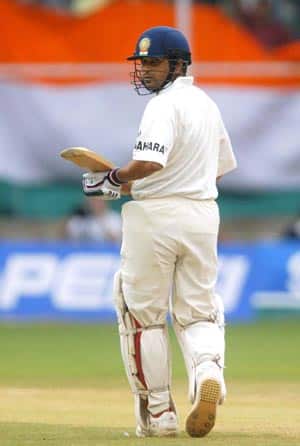 Jawaharlal Nehru gave a stirring speech in a national broadcast from All India Radio, New Delhi, on January 30, 1948 — the day the nation lost the Mahatma Gandhi to an assassin’s bullets. Sudatta Mukherjee goes back 65 years in time to that inspiring speech by Pandit Nehru and correlates it to the monumental feeling of loss following Sachin Tendulkar’s exit from international cricket.

The light has gone out of our cricketing lives and there is darkness everywhere. I do not know what to tell you and how to say it. Our beloved Sachin Tendulkar, or Sachin as we call him, the Bheeshmapitamaha of Indian cricket, will no longer serve the nation as a cricketer. Perhaps I am wrong to say that. Nevertheless, we will never see him again on the field of cricket wearing the India cap as we have seen him with immense pride all these many years. The Indian team members will not be able run to him for on-field advice and seek solace from him. That is a terrible blow, not just to the Indian team, but to over a billion Indians. And it is a little difficult to soften the blow by what I or anyone else say.

The light has gone out, I said, and yet I was wrong. For the light that shone in this country was no ordinary light. The light that has illumined this country’s cricketing fortunes for these many years will illumine this country for many more years to come. That light will be seen in this country, and the world, and it will give solace to innumerable hearts. For that light represented something more than the cricket; it represented values, morals, conduct, empathy, humility, national pride, staying grounded and taking onus to be an impeccable role model — on and off the field — at all times.

All this has happened when there was so much more for him to do. The right-minded could never think that he was unnecessary or that he had done his task. But now, particularly, when we are faced with the challenge of having lost Rahul Dravid and VVS Laxman in quick succession, Tendulkar not being part of the Indian team any longer is a blow most terrible to bear for the younger generation who would have benefitted most from his wisdom. Tendulkar’s final Ranji and Test match innings emphatically proved that he is still worthy of a place in the side, not just as a father figures but also a meritorious batsman. Maybe, he could have carried on for a year.

Some madmen have hastened his cricketing end. I can only call them mad who bayed for his blood. And yet there has been enough of poison spread in this country during the past years and months, and this poison has had a toxic effect on people’s minds.  Tendulkar’s fans need to face this poison, like Tendulkar himself had — with much dignity.

Tendulkar’s heart has always throbbed for India. Nothing and nobody was more important than the nation. It reflected in everything he said and did — the latest being the tricoloured grip of his bat handle. It’s only proper that we give the Virat Kohlis, the Cheteshwar Pujaras, the Rohit Sharmas and others in India’s Generation Next the kind of support that we gave Tendulkar. That’s what Tendulkar would want himself. Look at how he rejoiced at the centuries scored by Pujara and Rohit on Friday; he did not sulk that he missed his own hundred in his farewell Test. The team has always come first for him.

If the cricket fans of India absorb that learning and practice it, it will be the biggest tribute they can pay the maestro.