Sachin Tendulkar scripted his retirement like no one else and left the game amidst huge applause and love from the fans. Abhijit Banare explains how perfect it can get for cricketers to announce their retirement in advance. 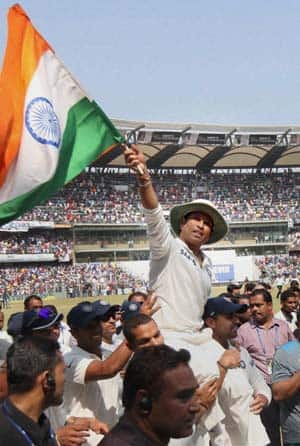 Sachin Tendulkar scripted a perfect farewell for himself © PTI

As Sachin Tendulkar walked into the dressing room one final time, nothing was more satisfying than to see the smile on his face, addressing the world in front of the people who mattered to him and the fans on his home ground at Wankhede Stadium in Mumbai, after the second Test against the West Indies. After all, Tendulkar scripted his retirement like no one else and left the game amidst huge applause and love from the fans. Abhijit Banare explains how perfect it can get for cricketers to announce their retirement in advance.


Sachin Tendulkar began an emotional farewell speech touching billions across the world standing at the Pavilion End of the Wankhede Stadium on Saturday. Exactly on the other end of the ground, three genius personalities stood in apt attention with hands folded, focussing on the man appearing on the giant screens. As Tendulkar thanked each and everyone who mattered in his life, the images of an emotional Rahul Dravid flashed on the screens. In between the beautiful extempore words Tendulkar essayed through those special moments, he quickly spotted Dravid and thanked him, Sourav Ganguly and VVS Laxman as well. After all, the four of them formed the ‘Fab Four’, scripting many invaluable victories for India.

All these great players had an opportunity to end on a high. But with the passion and dedication they have for the game, the motivation to play one more game and accumulate the joy on the field would surely have been there in the cases of Ganguly, Dravid and Laxman. And that motivation sometimes takes one beyond the realms of reality and keeps them going even as people around start questioning their place and part of the admirers turn into sceptics.

As Dravid, Laxman and Ganguly witnessed Tendulkar’s farewell with moist eyes, their minds would have rolled back to their own moments to say good bye. There’s absolutely no doubt that Dravid too would have got the same rousing farewell with his immense contribution and changing the way the country unites. If Tendulkar brought the happiness with his sparkling batting all these years, Dravid provided the reassurance in the hearts of fans with the solidity he provided at No 3. Perhaps if The Wall had waited for one more Test or announced his retirement well in advance, the officials and fans would have given him the send off he truly deserved. But, back in March 2012, Dravid said he didn’t want to hang around just for the sake of playing one final Test match. Retirement was a decision he had taken after lot of contemplation and deep down he was satisfied with it. Maybe, if Dravid could have taken a step back resting for a Test series or two, reassessing his game like Tendulkar often did towards the end of his career, it would have helped him to carry on for more. The failure in Australia was just a dip in form he went through, whereas he had done enough to be selected in the team. On Saturday, while watching the Little Master bid adieu, Dravid would have remembered those moments and imagined the feel of a jam-packed M Chinnaswamy Stadium, rooting for him for every single delivery he fielded, every solid forward defensive push and the exquisite cut.

It was a much closer moment for Laxman. After he was selected for the home series against New Zealand, Laxman announced his retirement. And to everyone’s surprise, Laxman’s next Test was scheduled on his home town in Hyderabad. Despite knowing that, he chose to address his final message inside the four walls of a room conducting a press conference.

Ganguly on Saturday got emotional about his own days and rued the moment of not playing his final Test at Eden Gardens. The former Indian captain, though, felt blessed to have played his last Test in India and ending with a victory at Nagpur. As decades flow by, the farewell moments will be just a fraction of their glorious careers in history books. But those last moments and the emotions that flow will stay with the players for a long, long time.

In recent years, the definition of retirement has evolved significantly. Tendulkar, if you can recall retired thrice: ending the One-Day International (ODI) career in 2012, ending Twenty20 career in 2013 and finally the big moment at Wankhede on Saturday. Though it may sound like a scripted drama, players these days have the opportunity to plan their exit like never before. The shortest format of the game allows them to keep busy and slowly climb down the steps towards a life without cricket. Yet nothing is more satisfying than walking with their heads held high in the whites as a capacity stadium applauds their service.

After witnessing the landmark moment of Tendulkar’s farewell celebrations in front of his home crowd, the trend of announcing the retirement will start seeping in. Moreover, a player’s form may not be as relevant when it comes to receiving a grand farewell. As voices clamoured for Ricky Ponting’s place in the Australian side after failure in the first two Tests against South Africa in 2012, he announced his retirement on the eve of the final Test at Perth in November. Though he didn’t end with the desired result, he was cheered and chaired around the ground at Perth. Announcing the retirement in advance allows the player to earn the respect and applause he deserves.

Neither Tendulkar nor Ponting were in the best of form heading into their final Test. But when it comes to the final moments for such all-time greats, fans and media will always keep negativity aside and bid a memorable adieu to such masters.

Timing of Bharat Ratna for Sachin Tendulkar: Pre-election gimmick by government to cash in on the emotional wave?