Sachin Tendulkar's inclusion for the ODIs in Australia needs scrutiny

Sachin Tendulkar's inclusion for the ODIs in Australia needs scrutiny

Why has Sachin Tendulkar been named in the Indian squad for the triangular series involving Australia and Sri Lanka is hard to understand. It will be difficult to gauge whether it was Tendulkar or it was the national selectors who made the first move, but both ways the decision is myopic and calls for a scrutiny. 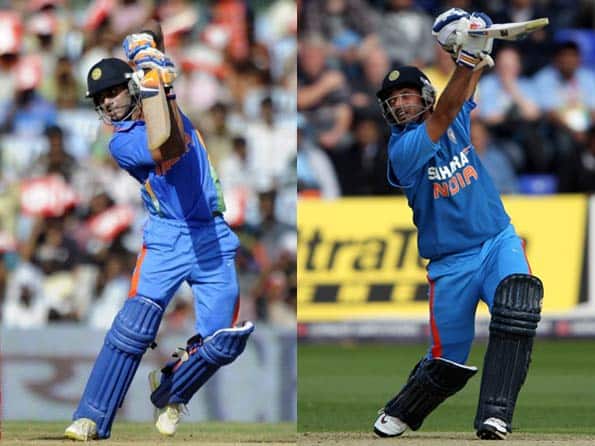 Manoj Tiwary (left), who got a hundred in his previous ODI, may have to sit out, while Ajinkya Rahane, find of the England tour, is not even in the squad © AFP/Getty Images

Why has Sachin Tendulkar been named in the Indian squad for the triangular series involving Australia and Sri Lanka is hard to understand. It will be difficult to gauge whether it was Tendulkar or it was the national selectors who made the first move, but both ways the decision is myopic and calls for a scrutiny.

On April 2, 2011 when India lifted the World Cup, a long standing dream of Tendulkar was realised. One of the blank boxes of his glittering resume was tick marked. His joy became the nation’s joy and it was added into the long list of ‘Tendulkar Moments’. But that is where it should have ended. He should have stopped playing in One-Day Internationals (ODIs) and focussed fully on Test cricket. When the statement did not come it was seen as a calculated move to avoid media’s ability to make mincemeat out of a golden goose. It was understandable.

When the team went to West Indies, he opted out of the entire tour. In England, after the disastrous Test series when his name was included for the ODIs, a few eyebrows were raised. But the selectors’ decision to include Rahul Dravid in the team, another absurd decision, diverted the attention. On the eve of the first match, a long-standing injury of his recurred and he was ruled out of the entire series and the question melted. The home ODI series was convincingly won without him and thankfully the media speculations of his interest to play in a few ODIs against West Indies to score the 100th international century did not materialise. But the question has cropped up again.

His commitment to score runs for the country is unquestionable and he lends a lot of value to the dressing room. But if probability is to be used as a tool then his role in 2015 World Cup as a cricketer is slanted against him.  His presence thus delays the team’s future plans. For a change, his intentions and the team’s long-term ODI agenda – where World Cup is the biggest prize – has clashed at a fundamental level. The set of youngsters, who had identified themselves for the future have come out of the cocoon, graduated to the role of seniors. It will only be ideal if they are allowed to take responsibilities for victories and defeats and start their independent journey.

The decision to include Tendulkar for the ODIs might be out of the fear of humiliation and in order to make up for the absence of Yuvraj Singh. It is safe to assume that Tendulkar will be playing most of the games in the tournament, except for the inconsequential ones. It means that Gautam Gambhir, Virender Sehwag, Rohit Sharma, Suresh Raina and Virat Kohli along with him are certainties in the batting line-up.

Does this imply that Manoj Tiwary, who scored a century in his last ODI match, will be benched for majority of the matches? What precedent will such a move set? Ajinkya Rahane, who was the find of the England tour, has been dropped. It robs away golden opportunities from these two youngsters to get some quality match practice under tough conditions and at the stage of their career they are in it will be a life-size loss for Indian cricket. Incidentally it was during this same series in 2008 that a young team’s ride to the top of one day cricket ladder was seeded under a fresh regime when they won the finals against Australia. Tendulkar’s role in it was principal. Ten members of that squad went on to become World Cup winners. The landscape has transformed and accordingly measurements need to be made considering that 2015 World Cup is scheduled in Australia and New Zealand.

The champion’s aura should breed assurance and free will into a new generation of cricketers. That is how legacy of a sporting team is extended, not by toeing on the lines of safety-first approach.

(Sidhanta Patnaik is a sport marketing professional, public speaker and writes for CricketCountry. His Twitter id is @sidhpat)

England decide to bat against Pakistan in first Test