In the wee hours of August 26, 2013, exuberant after winning the sacred urn, a few English cricketers decided that their gleeful victory celebrations warranted an element of obnoxiousness. They proceeded to give undiminished vent to this bent of mind by relieving themselves on the pitch at The Oval. A forced apology followed the understandable uproar and chagrin. 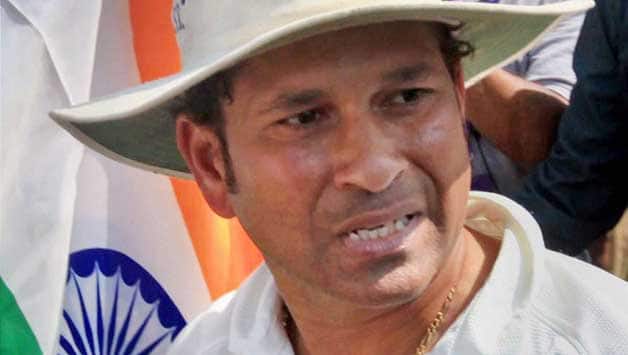 In the wee hours of August 26, 2013, exuberant after winning the sacred urn, a few English cricketers decided that their gleeful victory celebrations warranted an element of obnoxiousness. They proceeded to give undiminished vent to this bent of mind by relieving themselves on the pitch at The Oval. A forced apology followed the understandable uproar and chagrin.

On an emotion-soaked, sun-kissed afternoon on November 16, 2013, after delivering a soul-stirring, eloquent and ennobling speech that not only elicited a million tears but also officially brought the curtains down upon a stellar career, Sachin Tendulkar sedately proceeded towards the pitch at the Wankhede Stadium, and paid obeisance to the 22 yards that made and moulded him.

The contrast between the juvenile and the genteel; crass and class can be appropriately summed up by one powerful word — character. And it has been character that has bejeweled Tendulkar over a storied career spanning 24 years. A career which would be equally remembered for its unsullied beauty as would be recollected for an unparalleled assortment of seraphic strokes and sublime skills. Not only did the master batsman possess a messianic still head while facing up to swing and spin alike on a cricket ground, he also possessed an extraordinarily steady head off it. Adulation was assimilated, yet rigorously kept at arm’s length, while admiration was an ally to be respected but never to be revered.

Triumph on the cricket field was an absolute necessity; but so were actions having even the remotest bearing upon the tri-colour adorning his illustrious helmet. Aggression towards an opponent was never synonymous with abhorrent opprobrium. Repugnant wagging of the tongue was no substitute for a resplendent wielding of the willow or a wily act with the ball. Even the most preposterous of umpiring decisions were met by a barely perceptible shake of the head or a momentarily perplexed look. There was to be no explicit expression of disbelief or exhibition of incredulity. As Michel de Montaigne so aptly set down in his work ‘The Complete Essays’ — “On the highest throne in the world, we still sit only on our own bottom.”

One of Tendulkar’s childhood friends and a perpetrator in an unforgettable batting crime involving the number 664, Vinod Kambli once famously remarked that while Tendulkar had taken an elevator to arrive at the realm of international cricket, he [Kambli] had to take the stairs. Sachin Tendulkar might have taken an elevator on his way up, but he was never far from realising the importance of terra firma. On the other hand, the enormously talented Kambli, unfortunately failed to replicate his judiciousness in staying at the top. As a result, the southpaw, of who so much was expected, allowed a promising career to degenerate, disintegrate and finally diminish — a classic example of a blistering cover drive obfuscating the merits of a benevolent character.

One unprecedented incident however threatened to tarnish the blemish less career of this supreme cricketer, before falling flat. In November 2001, former England cricketer Mike Denness in his official capacity as a Match Referee implicated Tendulkar of ball-tampering at Port Elizabeth. The resulting chaos was completely predictable. The Board of Control for Cricket in India (BCCI) vigorously appealed against the decision and this seemingly unforgivable action was even raised in the Indian Parliament. Denness himself was pitifully inadequate and incomplete in justifying his actions. Effigies of Denness were burnt on the streets by protestors who were vehement in their defence of a man whose character was unquestionable and whose integrity was uncompromising. The ban on Tendulkar was subsequently overturned, normalcy restored, and the concerned Test match against South Africa was deemed ‘unofficial’. Denness, however, was viewed by an entire nation as a synonym of contemptible intellect and moral ignorance.

To quote CS Lewis, “true humility is not thinking less of yourself; it is thinking of yourself less.”  Tendulkar has not only led his cricketing career, but lived his life in accordance with this alluring quote. A cricketer can never outshine or outlive cricket, even if he happens to be named Sachin Tendulkar. No cricketer is more in grasp of this humbling fact than Tendulkar himself. It is this realisation that has attracted him to a legion of diehard worshippers and a teeming multitude of admirers. Overhauling records, outdoing egregious opponents, and outsmarting treacherous tracks are but mere ephemeral doings in a larger scheme of things. It is the game that matters and to play it with dignity, decorum and dedication is an irreducible duty. A preternatural talent that accords immense supremacy and a singularly unchallenged set of skills still demands a pious subservience.

Such subservience has enabled the greatest batsman of our generation to don the role of a divine carpenter, perfect an art and hone its nuances over and over and over — all the time while being in perfect knowledge of the fact that such an art would thrive long after the artisan himself has departed the scene. The magical craftsman has however suffused his much loved art with its most significant and indispensable element — character.

It was this lambent character that was on unashamed display when Tendulkar venerated the 22 yards which had led to him mesmerising one sixth and more of humanity for an immeasurable span of 24 glorious years.
It is this incandescent character which will ensure that Tendulkar always walks with his head held high, steady and still — even when there is no Glenn McGrath with a beautifully economical run-up to face up to amidst a hushed atmosphere, expectant crowd and a straight bat. If JM Barrie was to be around to watch and listen to Tendulkar’s swansong speech, he would have recollected his own memorable quote from ‘The Little Minister’ — “Life is a long lesson in humility“.

He also would have admitted that Sachin Tendulkar has been one of the noblest teachers of such a lesson.