It was a sunny day at Auckland on 27 March 27, 1994. Hosts New Zealand seemed to enjoy the warmth better — prior to the commencement of the second One-Day International (ODI) — primarily because they’d comprehensively beaten India in the first fixture just a couple of days ago. 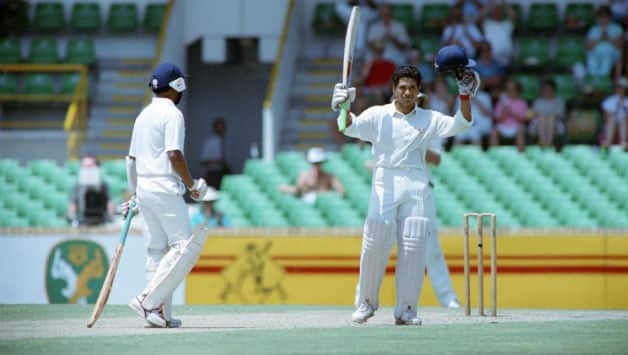 It was a sunny day at Auckland on 27 March 27, 1994. Hosts New Zealand seemed to enjoy the warmth better — prior to the commencement of the second One-Day International (ODI) — primarily because they’d comprehensively beaten India in the first fixture just a couple of days ago. The visitors’ dressing room would have been understandably gloomy, since firstly, they were confronted with an uphill task of levelling the series, and secondly they were dealt a major blow as one of their regular openers, Navjot Singh Sidhu, was ruled out of the match due to a neck strain.

This prompted skipper Mohammad Azharuddin to promote Sachin Tendulkar to the top of the batting order. For starters, Tendulkar had never before opened the innings in almost five years of ODI cricket. Nevertheless, it was a challenge that he’d gracefully accept. Having opted to bat first, the Kiwis soon lost half their side for just 34 runs on the board, before Adam Parore and Chris Harris staged a comeback to steer the total to a modest 142. Considering a few previous results on the surface and the fact that a recent Test between Pakistan and New Zealand ended well within three days, many expected that the Indians too would hit a minor roadblock.

Out walked Tendulkar to bat, as a makeshift opener, alongside Ajay Jadeja. The first three overs were safely negotiated, and once the fact that there weren’t any demons in the pitch was deduced, a lovely drive followed from the wizardly willow of the Little Master off Chris Pringle’s second over. That sent a stern message across to the Kiwis that the Indians, and especially Sachin, weren’t going to hang around and score at three runs an over. Two more boundaries in the same over — a lofted hit over mid-on and a sweetly timed shot on the leg-side — confirmed that fact.

In the next over, he exquisitely clipped the ball backward of square and it rocketed to the fence despite the fact that Pringle was just a few yards away from it. First-change bowler Gavin Larsen too was taken to the cleaners, as Tendulkar danced down the track and cleared the in-field on multiple occasions. He raced to 47 off just 32 balls, with nine fours and a six. With Tendulkar on the rampage, the duo put on 61 for the first wicket in just nine overs. Even after the fall of Jadeja’s wicket, the maestro seldom showed signs of slowing down.

Vinod Kambli, the new batsman in, had the best seat in the house at the non-striker’s end as Tendulkar blasted one over the ropes to bring up a quick-fire half-century. The large Indian contingent at the Eden Park went berserk and a few of them ran into the middle to congratulate Tendulkar. Little did they know back then that it’d become a regular feature of Indian cricket for the next 18 years to come. A piece of puzzle had just fallen into place.

India had by then knocked off half the target in just under 11 overs, but Tendulkar refused to take his foot off the pedal. He kept hitting the ball over the in-field, taking full advantage of the fielding restrictions. To say that the Kiwis at this juncture were flabbergasted would be an understatement. New Zealand skipper Ken Rutherford used five bowlers, but runs kept flowing off Tendulkar’s blade. He was eventually caught and bowled by Matthew Hart for 82, but by then the 49-ball blitzkrieg had well and truly caused irreversible damage.

Tendulkar’s innings was a watershed moment, as it gave India a destructive opener. Prior to this game, he featured in 70 ODIs, having scored 1809 runs at an average of just over 31, with absolutely no centuries to his name. After that memorable knock, Tendulkar opened for India on 344 occasions, scoring 15310 runs at an outstanding average of 48.29 in a career that spanned a further 18 years. As many as 45 of his 49 ODI centuries came at the top of the order, including the monumental 200 against South Africa.

Recognising an opportunity and converting it into something big is the hallmark of a true champion, and the way Sachin served India for the next many years is evidence of that. That one innings at Auckland played a major role in changing the face of Indian cricket.

Preview: India and Pakistan to slug it out in first T20 match at Bangalore