Sachin Tendulkar guided Mumbai to yet another Ranji Trophy win at Lahli. Abhishek Mukherjee is overwhelmed by the innocence of the man who has achieved it all. 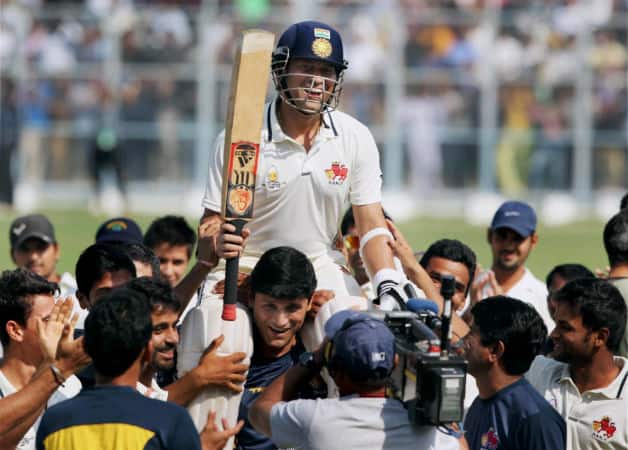 Sachin Tendulkar guided Mumbai to yet another Ranji Trophy win at Lahli. Abhishek Mukherjee is overwhelmed by the innocence of the man who has achieved it all.

Being a father I have been aware of what an innocent smile can look like: the sheer unadulterated pleasure it brings to your life, the way it lights up every morning of yours, the way it soothes you after a hard day’s work, the extent to which its memories keep you going through tough times.

There have been moments when, strangled by the noose that life and our professions tighten around our vulnerable necks every day, we fathers catch a glimpse of during the day, often with the fingers of the left hand alert on the Alt and Tab keys.

But then, there is the other innocent smile.

Imagine. Here is a man whose career you identify your growing up with. There is almost nothing in the world of cricket that he has not achieved. He has belittled mountains and traversed oceans, reached the sky and conquered deserts. He has ruled like few have.

But he still punches the air in ecstasy when he pulls off a victory in the obscurity of Lahli when it means nothing as far as his vast career is concerned. Lesser mortals would have maintained an aura of so-called dignity and walked away with a casual wave of the bat. They need not have acknowledged the Lahli crowd. No one would have said a thing. There is a BCCI-style grand farewell waiting for him anyway in Mumbai in November.

But then, he is Sachin Tendulkar. He is carried off the ground by teammates and strangers alike. One would expect him to take his helmet off and celebrating in some way or the other. Not him.

It is that smile. A smile that brings a smile to anyone who has watched it live. A smile that makes hands itch to click the Share button on Facebook the moment the picture appears on the newsfeed. The smile of a 40-year old child for whom a victory over Haryana at Lahli still means that matches a child’s as they unwrap the birthday gifts once everyone has left or on Boxing Day.

The boy had turned into a man long, long ago. He had been taking on fierce fast bowlers at an age when his contemporaries back home had been bunking classes and tuitions to catch matinee and evening shows. The man, however, could not take the boy away from him. He never will.

He won’t be taking centre-stage in less than a month from now. We will be left with our own Tendulkar memories, rants over whether he was greater than Brian Lara, YouTube videos of his innings, and maybe a few humongous biographies.

And that smile. The purest of them all; even at 40; even at Lahli, a place that cannot be blamed if they rename it to Tendulkarnagar or something after today.