Sachin Tendulkar’s decision to retire from Test cricket is just shocking. Though we expected him to call it a day in the near future, I thought he would tour South Africa and New Zealand. 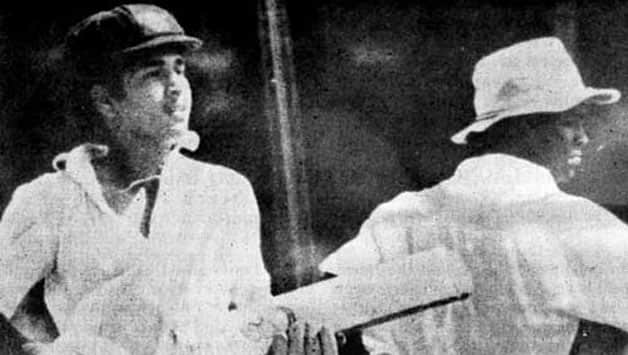 Sachin Tendulkar (left) and Vinod Kambli during their 664-run partnership for the third wicket in the Harris Shield in 1988. Photo Courtesy – DNA

Sachin Tendulkar’s decision to retire from Test cricket is just shocking. Though we expected him to call it a day in the near future, I thought he would tour South Africa and New Zealand.

His retirement is a huge loss to the game of cricket and to the millions of fans who idolise him. In my opinion, this means the end of Test cricket. No one would be interested in watching Test cricket after Tendulkar stops playing the game.

My association with Tendlya goes back to our childhood days when we dreamt of playing for the country while practising under the watchful eyes of [coach] Ramakant Achrekar Sir at Shivaji Park. We bonded instantly and had many memorable partnerships in schools cricket and then at the international level.

As a cricketer, he is class personified. And he’s completely in love with the game. During our record unbeaten 664-run partnership, he told me to ignore repeated instructions to declare the innings. Whenever the 12th man came in with a message, saying Sir had asked us to declare, Tendlya would drive him away and tell me: “Kamblya, tikdey baghu nakos (Don’t look there). We hummed Wham’s ‘Wake Me Up Before You Go-Go’ after every four and six while the hapless bowlers ran for cover.

As word of our talent spread, Sun-Grace Mafatlal took care of our educational and cricketing expenses. I used to get an allowance of Rs 200 per month. I saved my allowance for four months and bought Tendulkar a pair of trousers and shirt on his birthday. Such was our friendship.

However, the Tendulkar we’ve seen in the last couple of years is way different from the one I grew up with. He wasn’t scoring the kind of runs expected from him. It was sad. He should have ideally retired after the 2011 World Cup. It would have been a fitting farewell for a legend after fulfilling his childhood dream.

Though his decision to retire may have led to an outburst of emotions in the cricketing fraternity, it is the right one. The last two Tests will be an emotional journey for him. I hope he enjoys his stint in the middle and scores big.

Tendulkar has given immense joy to legions of cricket lovers across the world, but I have had the greatest joy of watching him bat from the other end. I will miss him.

(Vinod Kambli was Sachin Tendulkar team mate in school, for Mumbai and India. He played 17 Tests and averaged 54.20 and 104 ODIs at 32.59. The above article, based on a conversation with Kunal Purandare, was first published in DNA)