A ready reckoner of Sachin Tendulkar's hundred hundreds as they were scored.

By Abhishek Mukherjee and Arunabha Sengupta

The Sachin Tendulkar hundreds. The first was scored on August 14, 1990, the hundredth in March 16, 2012. The 22-years of brilliance and the sheer number of tons often push some of the gems to the furthest corners of the memory. Arunabha Sengupta and Abhishek Mukherjee provide a ready reckoner of the hundreds as they were scored — fine-tuned for the modern age, in a collection of one hundred tweets.

We mortals have always been bothered by round figures: the concept probably had its roots in the fact that we have ten fingers, and they are the parts of anatomy we have always used for counting. The supremacy of the decimal system, therefore, is hardly a coincidence.

The very concept has made centuries a crucial landmark in cricket. Hundreds have been among parameters to judge batsmen over ages. We all understand that Jack Hobbs’ tally of 199 First-Class hundreds would probably never be broken; that even the stern Don Bradman was elated after reaching a hundred hundreds; that Zaheer Abbas is the only Asian to the landmark; and more.

Other powers of ten have also played a significant role in the sport. Whether it is reaching a thousand runs by May or Sunil Gavaskar being the first batsman to reach ten thousand runs, a “one”, followed by a string of zeroes, have always conveyed a special message to the fans.

Which is why Tendulkar’s hundred hundreds — a feat that, in all likelihood, will not be emulated anytime soon — is one of its kind. We, at CricketCountry, take you on a trip down memory lane to a fantasy world where Twitter had existed before Tendulkar had scored his maiden international hundred at Old Trafford.

What would the Tweets have looked like? Let us look back at the hundred hundreds, then, in the restricted span of 140 characters. 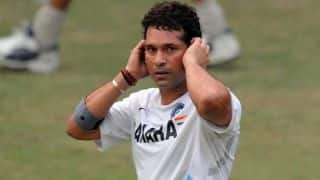