Tendulkar promises to be completely honest about his life in the autobiography.

Through his career, Sachin Tendulkar has largely been a non-controversial figure. However, in a 24-year-long career, it was inevitable that a few controversies would have come by. Tendulkar promises to be honest in his book Playing It My Way and the snippets revealed to the media about the Greg Chappell tenure did grab the headlines. But, does the rest of the book have any big surprises? Nishad Pai Vaidya offers a first glance.

Sachin Tendulkar’s ‘Playing It My Way‘ had created ripples even before it was launched at a glitzy ceremony at the ITC Grand Maratha in Mumbai. A few snippets released to the media in the lead-up made headlines — his views on Greg Chappell’s coaching tenure became the talk of the town. The question was: Would the rest of the book live up to all the hype? Will there be more interesting or even explosive revelations? In his prologue, Tendulkar says that he is “not in the habit of being sensational for the sake of it.” He says, “that’s just not me”. But he promises to express himself honestly.

The good thing about Tendulkar’s book is that it’s chronologically written with proper markers. As a reader, you can browse through the book to pick and choose the phases you want to write. You can find individual tours and even a few matches properly marked with some insights into the proceedings. Needless to say, your curiosity takes you to the match-fixing saga, the ball-tampering allegations, the Multan declaration (where Rahul Dravid had declared the Indian innings with the Little Master on 194), etc. So, what does the reader find?

As far as the match-fixing saga goes, Tendulkar condemns it in his book in a couple of pages, but there isn’t any section devoted to the turmoil that ravaged Indian cricket in the early 2000s. He calls it “repulsive”, “distasteful” and “disgusting.” Later in the book, he also discusses the spot-fixing saga of the Indian Premier League (IPL) and uses similar words to describe it. The readers, looking for juice and controversy, perhaps a few new details, would be left disappointed as Tendulkar has stayed clear of landmines on that front.

Then coming to the ball-tampering allegations, Tendulkar devotes a little over two pages to discuss the whole issue. Turning forward to the Multan declaration and the Monkeygate scandal, one can see that he has gone into a bit of detail. He has also described the backdrop of his retirement and how the decision was made.

Thus, from a brief outlook, it seems as if there aren’t any new controversial topics discussed in the book, with the exception of the Chappell episode. However, the book is an opportunity to get a peek into the champion’s mindset. Early in his book, he describes his childhood and one can easily sense the competitive attitude. Though he had crashed his bicycle on the first attempt, he became one of the best riders in his colony in months. As years went by, that competitive spirit only magnified. It promises to be a fascinating read. After all it isn’t the most pre-ordered book in history for nothing!

This is only the first glance. There is more to follow as the pages turn… 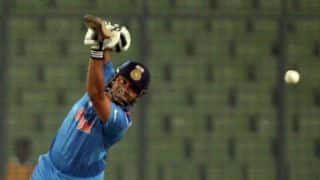