Sachin Tendulkar has suggested a change in the structure of school cricket in the city of Mumbai, to allow more players to participate. Nishad Pai Vaidya examines the merits of his proposed plans.

Sachin Tendulkar has suggested a change in the structure of school cricket in the city of Mumbai, to allow more players to participate. Nishad Pai Vaidya examines the merits of his proposed plans.

During the peak cricketing season in Mumbai, just take a walk across the Azad Maidan on a Sunday. The vast expanse of the ground hosts scores of cricket matches running simultaneously; with wickets placed perilously close to each other. You may be placed at long-on in your game, but might just stand right next to the wicket—keeper from another. Despite all those hazards, hundreds of boys flock to the ground with one dream in mind — to don the blue jersey and play for the country. But the harsh truth is that only a select few make it to the top and most live in oblivion.

Sachin Tendulkar’s suggestions on changes in the school and inter-collegiate cricketing structure in the city of Mumbai make perfect sense. The legendary batsman spoke like a statesman at a function organised by the Mumbai Cricket Association (MCA) to felicitate him. He realises that not everybody is special and that there are many who have sacrificed a lot for chasing their dreams. As Tendulkar said, “Many cricketers have played with me who had family support and the same way there were many who did not have the family support. In fact there have been a few people who have left home to play cricket and they have not been successful. But for the passion of cricket they left their homes and kept their passion alive.” And, he did say that families usually push their children to study and become engineers or doctors. All they need is a chance to show that they can become sportsmen.

The MCA would do well to heed Tendulkar’s advice for he has voiced the hopes of thousands of young boys who rush to the ground every day. Many travel in packed local trains with heavy kit-bags on their shoulders. It is a tough road as many hope to figure in the eleven. It is that hope that drives them and they rush for their games; not knowing whether they would play. What do such boys do when they don’t get a chance to feature in competitive games? How will they grow if they do not face match situations? Given the plethora of talent, even schools have fairly settled elevens and the reserves find opportunities hard to come-by.

Thus, Tendulkar’s advice on allowing 15 players to play is a good one, as that would allow such “borderline” (As he described) players more chances. Talent does play a role yes, but we have seen numerous players who have overcome the lack of ability and carved successful careers. There may be many similar players at the grassroots, with great resolve, but few opportunities. Such an approach would help them showcase their ability and perform.

Although one may be a bit skeptical about Tendulkar’s suggestion, it may actually help increase the standard of cricket. He did speak about the different surfaces and players losing out as a result, but let us look at it in a simplified manner. If they (a school team) are given a pool of 15 for a game, they can rotate their players. Thus, one side’s best batsman would be up against the other side’s best bowlers. For example, a fifteen member squad may have eight batsmen and seven bowlers. If only 11 are allowed, then obviously the best would play. Now, all eight batsmen may be able to bat during their innings and once it concludes, the seven bowlers can enter the park. That would intensify the competition on both sides and raise the bar for school cricket.

Of course, Tendulkar spoke about the city of Mumbai, but his suggestions may come in handy in almost any part of the country. As he mentioned, the game has truly become national as it has permeated to the smaller centres. If the structure is remodelled in that way, you’d find many players benefiting. A potential player shouldn’t be lost due to lack of opportunity. 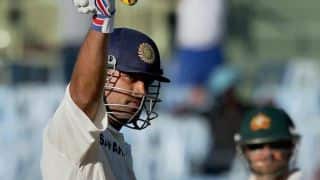