The Test ended on a farcical note as everyone barring Healy (who took 5 catches in the innings) bowled.

October 8, 1994. The Australians were on top at Rawalpindi, taking a 261-run lead and enforcing the follow-on on Pakistan. Then Saleem Malik flailed his bat, and all was thwarted. Abhishek Mukherjee looks back at the innings Wisden ranked among their top 20 at the turn of the century.

Mark Taylor had succeeded Allan Border at the helm, and had set out on a mission. In a few months’ time they would beat West Indies in West Indies to topple the latter from the top position in Test cricket. However, that had to wait for some time — for Pakistan had to be vanquished in their den.

Javed Miandad had played his last Test a year before the series, but Pakistan had in their line-up three exciting batsmen in Saeed Anwar, Aamer Sohail, and Inzamam-ul-Haq. There was, of course, Wasim Akram and Waqar Younis, backed up by Mushtaq Ahmed.

Arunabha Sengupta wrote of him: “Zaheer [Abbas] could effortlessly stroke a straight ball past cover-point. [Javed] Miandad could whip it with street-smart nonchalance through mid-wicket. [Saleem] Malik could do all that, even hit it for six over point. But he also delighted purists by delving in the virtue of playing it in the V.”

The first Test at Karachi was one of the greatest in the history of the sport. It saw some excellent bowling performances from Wasim (8 for 138) and Waqar (7 for 144). David Boon scored 114 not out in the second innings as Australia collapsed from 171 for 2 to 232.

But with Pakistan requiring 314, Shane Warne (8 for 150) lived up to the challenge. At 184 for 7, the hosts were as good as out of the contest, but Inzamam and Rashid Latif decided to take charge, adding 52. They needed another 56 when Mushtaq joined Inzamam, but the Master of Multan ensured a one-wicket win.

The toss that backfired

The second Test at Rawalpindi, thus, had a lot in store. Australia included a debutant fast bowler called Damien Fleming. Pakistan, on the other hand, recalled Mohsin Kamal, who was hailed as a tearaway in his teens but had not played a Test since 1987.

Malik put Australia in, but Wasim, Waqar, and Kamal could not make use of the conditions — though it must be admitted here that Wasim went into the Test with a back injury and toiled hard despite the pain. He bowled with venom, especially on Day Two, shaking up Steve Waugh and making him take cover — but could not break through.

Michael Slater began in characteristic fashion, smashing a 155-ball 110 and adding 176 for the opening stand with Mark Taylor. The Waugh twins, Michael Bevan, and Ian Healy all scored fifties, and Taylor declared the innings closed at 521 for 9 on the second evening.

Sohail launched a furious onslaught on Australia in response. He raced to 80 from 83 balls, 58 of which came in boundaries. Then Pakistan slumped to 198 for 8. Wasim and Waqar fought with the bat, but Pakistan, bowled out for 260, had to follow-on.

Taylor had Jo Angel bouncing at Sohail in the evening. The plan almost worked. Taylor reminisced in Time to Declare: “Almost immediately Sohail swung at one and sent it looping straight to Warnie, out on the fence. Warnie has a good, safe pair of hands, and normally he would ‘swallow’ a catch like that. But he put it down…”

Pakistan finished the day on 28 without loss. They needed another 233 to make Australia bat again. The ball was turning.

Anwar and Sohail defied the fast bowlers before a bouncer from Mark Waugh (he bowled seam-up those days) took off and split Sohail’s lip. He had to retire on 30, and needed four stitches. Zahid Fazal was caught behind almost immediately afterwards, and Pakistan went to lunch at 111 for 1.

Taylor was upbeat despite Pakistan’s fightback. His words for his team were encouraging yet demanding: “We’re bowling okay, but I’m asking you for some more fire and venom after lunch.”

Then he sought out Angel, the tallest and fastest of the lot, with a plan: “Malik is obviously their key man. Why don’t you go around the wicket to him? I’ll put two out on the hook, and a bat-pad in. Let’s bowl him a good round of short ones and see how he handles them.”

So Angel came round the wicket after lunch. The ball was beautifully pitched, just short of a length, and left Malik; the batsman was sucked into a back-foot drive, only to edge it; and Taylor, one of the finest slip fielders the world has seen, dropped a regulation catch to his right. Malik was on 20.

Then came the onslaught. The first fifty included ten boundaries, and came off 49 balls. He added 57 in the hour after lunch. A desperate Taylor turned to Bevan, but a merciless Malik plundered 25 runs off his three overs of Chinamen.

Malik took some mercy on the Pakistanis as the second fifty included a ‘mere’ nine hits to the fence. The 5,000-strong crowd had started the applause when Malik was on 97; now, when he on-drove Warne against the turn for four to reach 103, they broke into a celebration worthy of the innings.

Anwar was reduced to a spectator as Malik took control, dominating the Australians — including Warne on a deteriorating wicket. Anwar finally fell to Mark Waugh for 75, and Sohail resumed batting. Pakistan reached 324 for 2 at stumps, and had acquired a 63-run lead.

Malik had scored 155 out of the 245 they had scored during his stay at the crease. He had hit 26 boundaries. Given the circumstances, there could have been few better innings.

Saleem Malik slowed down the morning after, for Pakistan lost Sohail early in the day. But Aamer Malik dug in with 65, and the 133-run partnership put the Test beyond Australia’s reach.

Aamer’s dismissal was a gentle one: just when it seemed he would reach that coveted hundred, he pushed one tamely to Bevan at mid-wicket.

Inzamam shuffled across the stumps off the first ball he faced. He was rapped on the pads, and Karl Liebenberg did not hesitate. Fleming had two in two. Could he take a hat-trick on debut?

The players had drinks after Inzamam’s wicket, and Angel sent down another over that went for nine. Fleming would have his chance, but the man on strike would be Saleem Malik, then on 237 with 34 boundaries. No Pakistan batsman, before or after him, would come close to this in an innings against Australia.

As Fleming walked back to his mark, he told McDermott: “Saleem doesn’t know it yet, but he’s about to become a part of Test history.” The next ball was a peach of a fast leg-cutter, moving away late and at pace; the edge was collected by Healy; and Fleming was lifted off the ground by the muscular hands of Angel.

“I felt a Sarfraz spell coming on, but unfortunately it stopped at three,” Fleming later joked. The reference, of course, was about Sarfraz Nawaz’s famous 7 for 1. He became the third bowler to take a hat-trick on Test debut, after Maurice Allom and Peter Petherick.

The Test ended on a farcical note as everyone barring Healy (who took 5 catches in the innings) bowled. Taylor and Slater removed Latif and Waqar respectively. They would remain the only wickets of their Test careers.

Pakistan were bowled out for 537, and the players shook hands after 10 overs —though not before Waqar had run through Taylor’s defence.

– Pakistan clinched the series 1-0 with a draw at Lahore — a Test Wasim and Waqar missed due to injuries. Warne (6 for 136) had them down at 209 for 5 before Moin lifted them to 373 with 115 not out. The tourists acquired an 82-run lead, McGrath and Warne bowled their hearts out, but Malik (143; he had scored 75 in the first innings) and Sohail (105) could not be conquered. It was also Phil Emery’s only Test, thus becoming a quizmaster’s delight.

– Taylor decided to bat on at The Gabba the following month with a 259-run lead (according to Gideon Haigh, Michael Atherton and Alec Stewart had already padded up). He set England 508, Warne took 8 for 71 including a hat-trick, and Australia won by 184 runs.

Man of the Match: Saleem Malik. 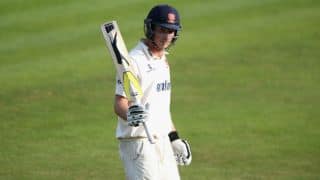