Fallah has been very consistent for Maharashtra in Ranji Trophy since his debut in 2007.

Samad Fallah has been very consistent for Maharashtra in Ranji Trophy since his debut in 2007. As the young side made it to the final of this season, Fallah led the way for the bowling attack with his own brand of swing bowling. Despite going through a slump of sorts at the start of the season, he has roared back and delivered impact performances, none better than his effort in the semi-final, where he took a ten-for. Not only that, but he also registered his 200th First-Class wicket in that game.

CricketCountry caught up with Fallah and spoke to him about the ongoing season.

CricketCountry (CC): Initially, you were out of the side for a game or two as you weren’t getting wickets. How much did that affect you as you have been a regular member of the side?

Samad Fallah (SF): As a player, it obviously does. But, I didn’t want to be in the team and not perform. It was good as I was rested for one game. That was a good thing that happened and I clicked after that.

CC: And, what did you do to get that wicket-taking mojo back?

SF: For a few seasons, I have been the main wicket-taker. Whenever the team needed a wicket, they gave the ball to me. Somehow, it did not work at the start of the season. I have been struggling in the lower division, erstwhile Plate Division. If you look at my career graph, I have shined in the Elite, taking about 160 wickets. In the Plate, I have 40 wickets in three seasons. Out of my ten fifers, nine have been in the higher division. I don’t know why it happens, so I wanted to get back and perform. I got a chance against Jammu and Kashmir and I took wickets.

CC: In that game against Jammu and Kashmir, Maharashtra managed to bowl them out for under 100. It was a seaming track, something that suits your style. What was your strategy on that surface?

SF: We were relegated this season and at the start of the season, we felt the senior players had to play and put their effort. In the first game, Sachin Choudhary took wickets. I had to keep it tight and my bowling was slightly defensive then. In the second game, which was in Hyderabad, I tried to attack but somehow I didn’t get wickets. All these years, I have tried to be an attacking bowler. That is what I did [against Jammu and Kashmir] and we got them all-out under 100.

CC: In the game against Mumbai, we saw you had good support from Anupam Sanklecha and Shrikant Mundhe. How much has that helped you through the season?

SF: In most seasons, I used to take more than 25 wickets and the second highest wicket-taker would get much lesser. This season, we have three bowlers who have crossed the 30-wicket mark. That is the main reason why we have been successful this season. If you see this season, a bowler who isn’t playing [the final], Domnick Muthuswami, has taken around 17-18 wickets. The backing is so good now that even if someone is injured, the back-up bowlers have already taken wickets this season. That was a plus point this season.

CC: As a senior bowler, what did you think when you were 122 runs down in the quarter-final at Mumbai? You just went on the attack then.

SF: A few seasons ago, we had a similar game against Vidharba, and Sulakshan Kulkarni was their coach then. I had taken seven wickets in that game. So, when we were going into the field, we told ourselves that two and a half days are left. We just had to go and express ourselves and had nothing to lose. We bowled in the right corridors and all the fielders were charged up and took splendid catches. That is how we won the game.

CC: Then came your big game. How did you take on the Bengal batting line-up, which has quite a few good batsmen?

SF:  I got my first wicket in the third over. For ten overs, there was no wicket. I had to bowl eight-over spell that game. The wicket was slow and it wasn’t coming on to the bat that well. I had to vary my approach, shifting from around to over the wicket. I got a wicket after a long gap and then the next man was out first ball. I was on hat-trick and [Wriddhiman] Saha was almost out. I could have taken a hat-trick in that game. First session, we had taken four wickets. The strategy was to swing the ball and make them play. That is how I took the seven wickets.

CC: In the second innings, you got your 200th First-Class wickets. Years of consistency; how special was that moment?

SF: The 200th wicket was not in my mind, but we wanted to go to the finals at that stage. It was then that I got to know that I was a wicket shy of 200. Obviously, it is like an identity for a bowler. A part-timer who plays for a long time can take 100 wickets. But 200 says that you are a specialist bowler. Coming in 50 games is good. That was special.

CC: In your café in Pune, there is a painting to commemorate your 150 First-Class wickets. Tell us a bit about it.

SF: My start wasn’t like a typical cricketer. I didn’t play any age-group cricket. I used to play a lot of tennis ball cricket. Somehow, I had to stop the game, then I was sitting in my café and two years after that, I started playing again. I wanted people to notice me and I returned to play. Me playing Ranji Trophy was a surprise for my family. They didn’t know I was picked and I called up from Tamil Nadu to give them the news. I took 73 wickets in local cricket and that is how I got selected. After completing 100 wickets in 20 games and 150 in 37, my dad wanted to give me a surprise and he painted a wall to say that, “We are proud of you.”

CC: What is the secret to the swing that we see from you?

CC: What are you looking forward to in the future?

SF: I obviously want to play higher; that is every cricketer’s dream. If not, I’ll still keep performing because I love the game and respect every First-Class match. Whatever game I get is hard earned. That is what I have learnt all my life that every game is important. Every chance I get, I will grab it with both hands. I have played for India Green once, in the Challenger Trophy and did well there. I have played Duleep Trophy and took wickets. Whatever chance I get, I will keep performing. That is all I can do. The rest is not my hands. 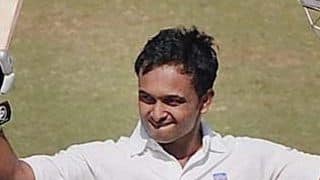