Samuel Moses James Woods (quite a mouthful for a name) was undoubtedly one of Somerset’s favourite icons. It seems that the rather familiar nickname ‘Sammy’ had been imposed on him by the Press.

Samuel Moses James Woods (quite a mouthful for a name) was undoubtedly one of Somerset’s favourite icons. It seems that the rather familiar nickname ‘Sammy’ had been imposed on him by the Press. He was normally ‘Mr Woods’ or plain ‘Sam’ to those who knew him well, and there were many at Taunton who did know him very well.

Sammy Woods was born April 13, 1867 at Sydney to John Woods and his wife Margaret Ewing, both born and bred in Ireland, and who were later both immigrants to Australia. In his later years, the genetically acquired Irish gift of the ability to spin a yarn and to hold an audience in thrall with his persuasive tongue was very much in evidence in Sam Woods as he was to become a raconteur extraordinaire.

Sam was one of five brothers, all with remarkable athletic ability. Sam was educated at Royston College and Sydney Grammar School, all the while developing and honing his natural talent for cricket, and, at this stage of his life, his prodigious aptitude for bowling.

While at Royston, he once took 7 wickets from 7 consecutive deliveries. All through his academic career, Woods always displayed a far greater enthusiasm for his varied sporting activities rather than in any desire to really further his education.

It is reported that during the English tour of Australia in 1881-82, he often missed school (and was frequently caned for the offence) to watch cricket and even went so far as to buy a couple of the English cricketers drinks for the privilege of bowling to George Ulyett in the nets. He was 14 years of age at the time.

When he was 16, his parents sent Sammy and his younger brother Harris to England to complete their education. Initially, both had joined Silwood House, a sort of preparatory school at Tunbridge Wells, Kent, prior to being admitted to Brighton College, where Sam was enrolled in 1884.

Sammy was in Brighton College from 1884 to 1886, going up to Jesus College, Cambridge in 1888. He spent four years at Cambridge, earning his Light Blue. He rapidly developed into a multi-discipline sportsman, playing rugby for his university from 1888 to 1890 and earning 13 England caps. He played soccer for Brighton College and, in later years, for Sussex.

Sammy later developed into an International cricketer, playing 3 Tests for Australia and 3 more Tests for England. He had a long and fruitful career with Somerset, beginning from the time when Somerset had not been admitted to the County Championship, till the time when he gradually became a pillar of the Somerset team.

In this narrative, however, we are concerned with the period when he was a student cricketer, his strong suite at the time being his bowling.

Contemporary press, school, and university archives are replete with the bowling wonders of the young Sam Woods. It seems that Sam Woods and one GL Wilson, both representing Brighton College, had turned out to be two of the best Public School cricketers of 1884. In 1885, Woods is reported to have taken 78 wickets at 7.50 runs apiece for Brighton College, including the astounding feat of capturing 8 for 17 in the first innings of the West Sussex school, Lancing College, all bowled, and following up with 6 for 10 in the second innings, 5 of his victims being bowled and 1 caught and bowled: 14 wickets in the game with no help at all from the field.

In his last year at Brighton College, Woods was proficient enough at his game to make his First-Class debut in a match for a team organised by one GN Wyatt, an amateur cricketer who was to play First-Class cricket for class cricket for Gloucestershire, Surrey and Sussex against the fifth Australian team to visit England, the game taking place at Portsmouth. He reached double figures in each innings in the match and took 2 wickets.

It was in a match for the Brighton College 1st XI against an unspecified opponent that Woods bowled a most extraordinary 5-ball over, hitting the stumps 8 times but picking up only 3 wickets, as follows:

In later years, Woods would recall another match, against Dulwich College, where he had hit the leg-stump thrice in one over, each time hitting it fairly hard, without dislodging the bails, and each time the ball going on for 4 byes. All this may raise the question in an enquiring mind about the legitimacy of some of the deliveries he was in the habit of bowling at the time.

During his time with Cambridge, we find him taking 5 for 78 against CI Thornton’s XI in May 1888, his Freshman year. These included a hat-trick, with the wickets of Edward Studd (the Studd patriarch), Edward Buckland, and Bobby Peel. This was Woods’ first First-Class game for Cambridge.

Indeed, it was said at the time that one of the grandest spectacles in University cricket was the sight of Sammy Woods bowling his right-arm fast-medium deliveries with Gregor MacGregor keeping wickets to him.

Against Sussex in June 1888, Woods had 5 for 64 and 3 for 71, also contributing a vigorous 79 not out in the only innings in which he batted. Our man completed 50 First-Class wickets for the season in the game versus an MCC team in June 1888. He signed off the 1888 season with 6 for 48 against Oxford.

Woods was to achieve his best innings bowling analysis in his third year at Cambridge, against the same CI Thornton’s XI at Fenner’s in May 1890. He captured 5 for 19 and 10/69 in team innings of 68 and 133. The 10-wicket haul included 7 bowled, 1 caught-and-bowled, and 2 caught, one of these was caught by the indefatigable wicketkeeper, MacGregor. He gained his cricket and Rugby Union Blues in his very first year at Cambridge, and took 38 wickets in all against Oxford with a best of 7 for 60 in 1891.

The figures demarcate him as being a veritable colossus for Somerset in his time, much loved and revered.

Sam Woods passed away on April 30, 1931 at his beloved Taunton aged 64 years. It was reported that his grieving fans had lined both sides of the road as his cortege had passed, and that flags had been lowered to half-mast as far away as The Oval. He had never felt the need to be married: his whole life revolved around Taunton and his Somerset team. 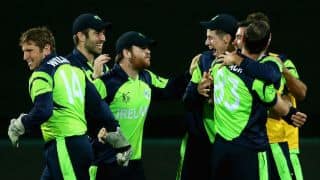 Sri Lanka vs Australia, Test series: Marks out of 10 for hosts