Sudhir Vaidya, one of most-known cricket statisticians in the country, recalls his memories of Suresh Saraiya with whom he spent over four decades in the commentary box. 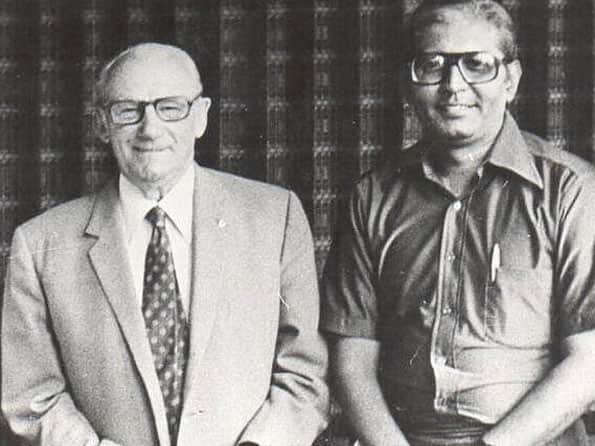 Suresh Saraiya (right) did commentary in over 100 Test matches all over the world. In the above picture, he is seen with the legendary Sir Don Bradman during a tour of Australia

Sudhir Vaidya, one of most-known cricket statisticians in the country, recalls his memories of Suresh Saraiya with whom he spent over four decades in the commentary box.

In the pre-televison era, the cricket-crazy nation of India was hooked on to radio to catch live cricketing action. Suresh Saraiya was an iconic commentator whose voice took the action to millions of people in India. I first met him in the year 1967 and we began a wonderful journey in the commentary box. The last game we covered together was the India-West Indies Test match at the Wankhede Stadium, Mumbai in November 2011. It was a long and cherished association.

When I met Suresh in 1967, we were both young – both of us were born 1938 – and as a result we struck a great rapport. Since then, we have shared a special friendship and have been together since those days. We would meet frequently.

Suresh’s commentary was very studied and meticulous. He never entered the commentary box without doing his homework. He used to maintain a register which had an assortment of facts and figures, something he used brilliantly while commentating. Whenever statisticians like me provided him relevant numbers, he would use them intelligently in his commentary.

Suresh covered over 100 Test matches for All India Radio (AIR) since his debut in 1969 at the Brabourne Stadium, Mumbai. His 100th Test came at Nagpur in 2010 when India played New Zealand.

One incident that I can never forget happened in a Bombay-Delhi Ranji Trophy match. Delhi had a player named Rajesh Peter. Suresh went up to him and asked him the story behind the name. He then shared it in his commentary. It’s a reflection of his studious approach to the job. He believed he should provide the listeners with much more information than what was happening on the field of play.

Suresh’s bag contained a pair of binoculars, a register and fountain pens of different types. In the morning of the games, he used to ask me to give him specific details. At the end of the day, he would take the scoreboard and carefully highlight intricate details so that he would be ready the next day.

I have many fond memories of Suresh. He has supported and guided a number of people who wished to pursue commentary or any other profession. That was something very important to him.

He had an impeccable dress sense. I have never seen him at any cricket functions without a tie and neat clothes.

He loved to talk as much as he loved his commentary. We used to listen intently whenever he talked. It was his wealth of experience that made his conversations very interesting and anecdotal.

Outside the commentary box, he held the post of the Chief Public Relations Officer for the Central Bank of India. His association with cricket wasn’t just limited to the microphone as he played the sport for Wilson College. He commentated with illustrious men such as Vijay Merchant, Dicky Rutnagur and Devraj Puri – who was his idol.

There isn’t a cricket playing nation where Suresh hasn’t covered the game. With the players, too, he shared a very close friendship. The players always welcomed him whenever he approached them for an interview or an informal chat. He spent a lot of time in his early days with Vijay Merchant and (statistician) Anandji Dossa and they both instilled great values in him. That is how he inculcated in himself a studied approach, which ensured he never erred while talking about records during his commentary stints. If he didn’t know something, he took the trouble to find out. And he wrote down it down than trust his memory.

The details Suresh asked us statisticians were wide ranging. As a result, his commentary sessions used to be very informative.

When television arrived, broadcasters turned to him to hone his skills on screen. But the glamour of the television didn’t attract him and he continued his career with radio. He believed the real art of commentary remained with the radio as the listeners did not have an idea as to what was going on and it was a challenge for the commentators to create that picture with words.

A book on famous non-playing personalities in cricket is penned by Suhas Shivsagar. It’s a book in which Suresh and I are written about. Shivsagar loves cricket and came up with this idea to write about the people who are associated with the game, but haven’t played it. The write-up on Suresh was ready and he was happy about it. He had discussed plans for the book to be launched at the Cricket Club of India (CCI). Alas, just 24 hours later, Suresh is no more.

Until Wednesday morning, I had no knowledge of Suresh’s ill-health. When I spoke to him in the morning, all was fine. But in the afternoon I was informed that he was taken to the Bombay Hospital in a serious condition. In the evening, he left for his heavenly abode.

Rest in peace, my friend.

(Sudhir Vaidya has been statistician of the Board of Control for Cricket in India since the 80s and the Mumbai Cricket Association since the 70s. He has assisted radio and TV cricket commentators as a cricket statistician in over 250 live Tests, ODIs and domestic first class cricket matches. He has also edited/compiled 16 Statistical Annuals for BCCI during this period. Seven voluminous books on domestic cricket were compiled and edited by him, on behalf of the BCCI. He has also authored several books on cricket) 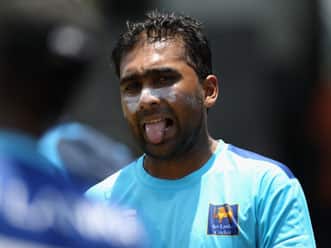 England-South Africa series has an Olympian mountain to climb