Sarfaraz Khan, the precocious 15-year old batsman from Mumbai, made a name for himself by smashing 101 from only 66 deliveries for India Under-19s against South Africa in the ongoing quadrangular tournament at Visakhapatnam. Nishad Pai Vaidya and Sarang Bhalerao go behind the scenes and talk to the people responsible in the making of Sarfaraz. 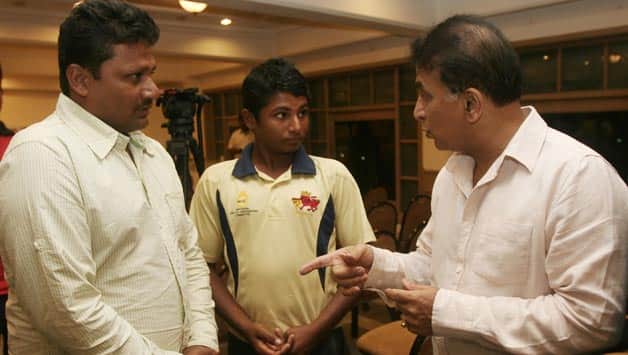 Sarfaraz Khan, the precocious 15-year old batsman from Mumbai, made a name for himself by smashing 101 from only 66 deliveries for India Under-19s against South Africa in the ongoing quadrangular tournament at Visakhapatnam. Nishad Pai Vaidya and Sarang Bhalerao go behind the scenes and talk to the people responsible in the making of Sarfaraz.
“You could have finished the game and not thrown your wicket away,” is what Naushad Khan told his son Sarfaraz Khan even though he had mauled South Africa under-19s with an innings of 101 off 66 balls. Chasing 271, India under-19 had slipped to 93 for four in the 16th over when Sarfaraz walked out and took total control. By the time he was dismissed after his whirlwind knock, India under-19 were 19 shy of victory with over 14 overs to go.

Sarfaraz’s hunger for runs has set him apart from the other schoolboys in Mumbai and that has taken him to the international under-19 level at the relatively raw age of 15. Behind that hunger and passion for the game is his father Naushad’s support and unflinching encouragement. Champions don’t slip up even when they overhaul a milestone; that is exactly what Naushad wants to teach his lad, “It is not a good option to relax as a batsman more so after getting to a milestone where you are sometimes bound to lose concentration.”

Anyone following local cricket in Mumbai would be quite familiar with Sarfaraz. The prodigy came to limelight when he scored 439 runs in a Harris Shield match, beating the great Sachin Tendulkar’s record for the highest score in Mumbai’s Inter-school the tournament. While, he has mainly been a top order batsman in school and club cricket, the right-hander has had to bat in the middle-order for India under-19. “For the club, he opens the batting or bats at No 3; he has to play according to the team’s requirements. The coach decides what is best and Sarfaraz has to play wherever he is needed,” says Naushad.

Mumbai is famous for producing khadoos cricketers, and Naushad has left no stone unturned to make his son into one such player. He said, “I would make him bat for long hours in simulated match conditions. The rule was simple — he had to run with his pads on as many rounds as the number of times he got out. Eventually he started realising the importance of his wicket and he that’s why he is getting big runs.”

Does it sound familiar? In the 1980s, Ramakant Achrekar took a young Tendulkar around Mumbai to different grounds to get him as much match exposure as possible. Naushad has taken a leaf out of Achrekar’s book.

“As a youngster, I have seen Achrekar sir coaching the boys. He used to maintain a notebook in which he would jot down mistakes made by his wards. He never praised anyone; he pointed out errors so that they got better,” Naushad explains.

Sarfaraz toured Sri Lanka in August with the India under-19s and starred in one of the games with the ball. Bowling his leg-spinners, his spell of four for 27 had shot out Sri Lanka under-19 out for 137 to help India win comfortably. Against Zimbabwe under-19s in the ongoing tournament, he scored a run-a-ball fifty.

Naushad has tried to shape Sarfaraz into a complete cricketer. He says that Sarfaraz has also kept wickets in a few games in Mumbai. The youngster primarily bowls leg-spin, but can also bowl a bit of medium-pace and a few off-spin.

Naushad has almost laid an Astroturf surface in the small veranda next to his house to aid their practice of his sons Sarfaraz and his youngest brother Musheer (8), who is also making waves in Mumbai cricket. “We wake up at five in the morning every day and get ready in an hour. If we have to practice on the Astroturf next to our house, we start at 6.30 am. If we have to go to Azad Maidan, then we start at 7.00 am.

Naushad maintains that he has received tremendous support from many people and is very thankful to them. The secretary of the Taximen colony where they reside, Abdul Rab Siddiqui, allowed them to lay the Astroturf.

Speaking to CricketCountry, Siddiqui said, “These two kids (Sarfaraz and Musheer) are like diamonds; one day they will shine like bright stars.”

Apart from the people in the colony, Sarfaraz has been helped by the likes of Sudhir Naik and Sulakshan Kulkarni, who have allowed him to practice with the Mumbai Ranji Team and face bowlers such as Aavishkar Salvi. Vasu Paranjape and Vinod Raghavan, the Mumbai under-19 coach, have also helped Sarfaraz improve his batting. When such cerebral cricketing minds come together, the youngster can only go one way — up.

In life one has to be willing to sacrifice in pursuit of one’s goals.  Sarfaraz and his brother have sacrificed the joys that most normal kids have in pursuit of their dreams. They cannot attend school regularly, and to ensure their education isn’t affected, Hitesh Doshi of Star Tutorials teaches them privately. Doshi takes their classes free of cost and helps them in mathematics and spoken English.

“They have very little time. Whatever they have, I take their classes. Because of their schedule, their formal education gets affected, but I teach them the basics. They standout on the field and I try to help them off it,” says Doshi.

What is in store for Sarfaraz? Naushad believes that his son is maturing. He is still learning the art of building an innings. “There is no point thinking about the future. Cricket is a game that is played in the present. You are known by what you are today. It’s Sarfaraz’s job to keep getting runs and leave the rest to the selectors. The selection matters are not in his hands but scoring runs definitely is.”

MS Dhoni: Analysis as a T20 batsman for India and Chennai Super Kings