When Pakistan responded to a Mankading with a successful handling the ball appeal.

On March 29, 1979 Sarfraz Nawaz managed to get Andrew Hilditch out handled the ball. Abhishek Mukherjee looks back at possibly the most controversial handled the ball dismissal in the history of Test cricket.

Though there are several ways in which a batsman can get out, only a few of them can be seen in international cricket on a regular basis. It is not every day that you come across two rare dismissals on the same day. March 29, 1979, however, was one such day.

After Sarfraz Nawaz had demolished Australia at MCG with 9 for 86 in the second innings (including a spell of 7 for 1) to help Pakistan obtain a 1-0 lead in the two-Test series, the two teams met at WACA where Kim Hughes won the toss and elected to bowl first.

In response, Australia were cruising at 219 for 3 despite a persistent four-pronged Pakistan seam attack. Rick Darling and Allan Border were the only ones to go past fifty, and despite three-wicket hauls from Imran and Mudassar Nazar, Australia managed to score 327, obtaining a crucial lead of 50.

The Australian seamers struck again, leaving Pakistan reeling at 153 for 6 (Majid scored a pair). Asif and Imran then added 92 runs in 115 minutes (of which Imran scored only 15), and Pakistan ended the day with 246 for 7, with Asif on 101 — and Pakistan were ahead by 196 at stumps on the fourth day.

Nos. 9 and 10, Sarfraz and Wasim Bari, did not last long. The last batsman Sikander Bakht, however, turned out to be a thorn in Australia’s flesh, batting for over half an hour. Then Hurst found Sikander outside the crease while running in to bowl, and to everyone’s surprise, Mankaded him.

The incident had left a sour taste in the minds of the Pakistanis. Sarfraz, probably the most mercurial of the lot, was fuming when he took the new ball, and was waiting for an opportunity. With Pakistan having scored 285 (Asif was left stranded on 134 while Hurst took 5 wickets), Australia needed 236 to win the Test.

Darling and Andrew Hilditch walked out to open the Australian innings. They put up a good stand, adding 87 for the opening stand. It was then that Darling drove Sarfraz to Sikander at cover, who ‘idly shied’ the ball towards the non-striker’s end. The unsuspecting Hilditch picked it up and threw it back to Sarfraz.

As soon as Hilditch threw the ball, Sarfraz appealed to umpire Tony Crafter, who had no option but to rule Hilditch out “handled the ball”. The Test was won and the series levelled without much ado, but the incident left a sour taste in the mouths of both teams.

Cricketers from both sides went vocal on the incident. Hughes said: “It made us grit our teeth. It just wasn’t cricket.”

When asked about the Sikander dismissal, Hughes responded “It wasn’t a square-off, it was just part of cricket”. Hughes added, “Andrew displayed great sportsmanship, I felt, in picking up the ball. Sarfraz’s action was not a part of professional cricket and there was no excuse for it.”

Asif apologised: “I think it was disgusting and I’m very sorry about it. It should never have happened. There was no need for us to have stooped to that level.”

Even Mushtaq Mohammad, the quintessential street-fighter, said “The Sikander run out should never have happened. That little incident left a bad taste and that was followed by the Hilditch dismissal. But two wrongs don’t make it right.” 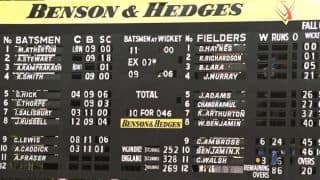