Sarfraz Nawaz, born December 1, 1948, was a trend-setting fast-medium bowler of Pakistan. Arunabha Sengupta looks back at the career of the man who developed the art and science of reverse swing. Sarfraz Nawaz, born December 1, 1948, was a trend-setting fast-medium bowler of Pakistan. Arunabha Sengupta looks back at the career of the man who developed the art and science of reverse swing.

In many ways Sarfraz Nawaz was a trend-setter.

He bowled fast on heart-breaking mud-baked wickets of Pakistan and ended up being quite successful. He was outspoken and controversial – a trait that has not mellowed with years. He was one of the first to raise questions and uncomfortable fingers about match-fixing. Most importantly, he was the first to master the art of reverse swing. And, finally, he started the oft repeated Pakistani tradition of retiring multiple times.

From far away, sitting outside the fence, he often looked a gentle medium pacer. But, a solid build and excellent action allowed him to propel the deliveries fast down to the other end. He could move it both ways. And in characteristic convention-defying ways, he bounced fearsome opposition fast bowlers – the likes of Jeff Thomson and Joel Garner. He seldom flinched when the fast men retaliated by sending balls whizzing past his chin.

The first few years in international cricket were discouraging. After a lukewarm debut at Karachi against England, Sarfraz was dropped and did not make his way back in the team for another four years.
It was in 1972-73 that he was recalled and toured Australia for the first time, and it remained the country of his greatest feats. Even as Australia won all three Tests, the final one played at the Sydney Cricket Ground was hard-fought. With four for 53 and four for 56 in two innings, Sarfraz accounted for the likes of Ian Chappell (twice), Greg Chappell, Ian Redpath and Keith Stackpole. As a result, Pakistan needed just 159 to win. However, Max Walker restricted them to 106.

When Pakistan toured England in 1973, the first Test at Headingley turned out to be memorable. Sarfraz came in at 209 for eight and hit an attacking 53 with some fierce driving against Geoff Arnold, Mike Hendricks, Chris Old and Derek Underwood. The low-scoring match ended in a thrilling draw, and it also marked the first time Imran Khan and Sarfraz Nawaz played together. Down the years, they were destined to become a formidable fast bowling pair.

The wickets in Pakistan mostly saw gallant but fruitless efforts, punctuated by occasional bursts of brilliance. The six for 89 against the West Indies at Lahore in 1975 was, in particular, a sterling performance.

Some steady showing in the West Indies and Australia elevated Sarfraz to the post of vice-captain to Wasim Bari in 1977-78 against England. However, protesting against pay, he disappeared before the second Test. It was the period of Kerry Packer’s World Series Cricket, and conjectures were rife about his recruitment by the rebel group. However, Sarfraz was discovered in London, where he had flown to enjoy Christmas even as the English team was playing in Pakistan. He returned in time for the third Test.
The following winter he captured four for 89 and five for 70 to defeat arch rivals India at Karachi. The 17 wickets he captured in the series proved decisive in Pakistan’s historic 2-0 triumph.

Seven for one and the Hilditch affair

Sarfraz’s greatest moment of triumph came at Melbourne, in the first Test against Australia in March 1979. Chasing 382 for victory, Australia was sitting pretty at 305 for three, with Allan Border and Kim Hughes looking inseparable, having already added 177. It was now that Sarfraz produced his dream spell. Border was bowled off a deflection by a superb ball that cut back sharply. The injured Graeme Wood jabbed a catch to the wicket-keeper off the first ball. Peter Sleep was yorked without scoring. Hughes, in a bid to hit the team out of trouble, lofted a catch to mid-off. Sarfraz then removed the remaining three batsmen without scoring to complete the rout. He had captured nine for 86, claiming all the wickets except that of Graham Yallop who was run out. His final spell was a 33-ball work of magic that gave him seven wickets for one solitary run. The Australians were all out for 310. 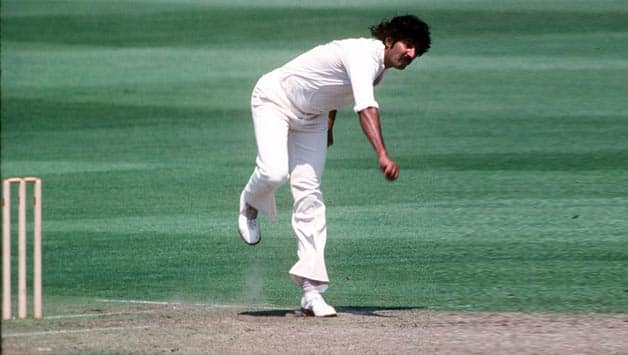 Sarfraz Nawaz looked a gentle medium pacer, but a solid build and excellent action allowed him to propel the deliveries fast down to the other end © Getty Images

In the very next Test at Perth, Sarfraz seamlessly followed up the brilliance with controversy. Already in the first Test, Rodney Hogg had been run out while indulging in a piece of gardening outside the crease. In the second innings of the Perth Test Alan Hurst had run out Sikander Bakht for backing up too far before the ball was bowled. Now, as Australia required 236 to win, Rick Darling and Andrew Hilditch made a strong start. With the score on 87, during a Sarfraz over, Hilditch picked up an erratic throw and politely handed the ball to the bowler. Sarfraz appealed and the batsman was given out ‘handling-the-ball’. Australia won easily, but it left a bitter after-taste following a thrilling series.

When Pakistan toured India in 1979-80, Sarfraz was omitted from the side – allegedly due to his differences with skipper Asif Iqbal. Years later, he claimed that Asif and Sunil Gavaskar were involved in fixing matches in the series. Somewhat remarkably, this stunning allegation came without any semblance of evidence. It led Gavaskar to counter, “I dare say this man’s reflection in the mirror will never believe what he’s telling. It’s all very well to make allegations against different players without producing a shred of proof. Pity we have to talk to the scum of the earth on television. And I don’t care if I sound strong but some people need to be talked about in such language.”

Sarfraz played Test cricket for five more years, interspersed with retirements that proved to be temporary. His last Test was at Gaddafi Stadium, Lahore, and he ended with a great all-round display.

When England batted, he picked up four for 49, teaming up with Abdul Qadir to dismiss the tourists for 241. And as the last hurrah, he came in with his side struggling at 181 for eight, and added 162 for the ninth wicket with skipper Zaheer Abbas. He outscored his captain and was out for his highest Test score of 90. He was at the wicket with an unbeaten 10 in the second innings when the match ended in a draw.
His final tally of 177 wickets from 55 Tests at 32.75 is extremely creditable in a country that was not known for fast men when he started. He also managed to go past thousand Test runs during his last match, thus becoming only the third Pakistani after Imran Khan and Intikhab Alam to get a ‘double’.

After his final retirement, he has acted as a Member of the Parliament, an outspoken cricket commentator and a crusader against match-fixing. According to him, he has even been threatened by armed men because of his comments about gamblers and fixers.

However, his lasting legacy is that art and craft of swinging the old ball in the unconventional manner, making the rough side of the ball gain importance and menace with passing overs. It was this art that he passed on to Imran Khan, and  in turn transferring into the glorious artillery of Wasim Akram and Waqar Younis.

It was Sarfraz Nawaz who brought this defining edge to the art of fast bowling.

Sachin Tendulkar's presence in Rajya Sabha more important than in Kolkata for third Test against England?