The bat scythed across in a revolting arc, forsaking finesse for ancient agricultural strain. The ball was hit with a clunk, and riding on fortune rather than technique it sailed away, all the way over the widish midwicket fence. 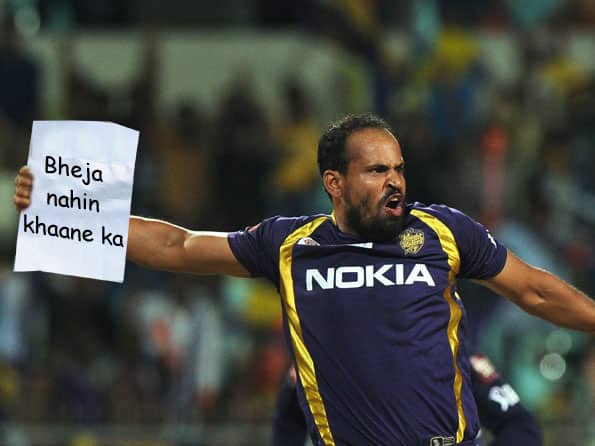 The bat scythed across in a revolting arc, forsaking finesse for ancient agricultural strain. The ball was hit with a clunk, and riding on fortune rather than technique it sailed away, all the way over the widish midwicket fence.

Thousands of pairs of eyes followed its flight into the stands before hastening back to the edge of the boundary where cheerleaders in glorified strings and undersized hankies signalled six with their pendulous assets. Thus caught up, many missed the mad dash of the 12th man from the Kolkata Knight Riders (KKR) dugout.

On air, Danny Morrison had just screamed “It’s a DLF maximum” in a voice groomed by the careful caricature of 10,000 WWF announcements. He now sat confused, wondering what had caused the hold up with just one ball to go of the allotted 20 overs. Tentatively, he turned towards Ravi Shastri, switching off his microphone.

“Ravi, do the playing conditions say anything about commercial breaks after DLF Maximums?”

Shastri, who had been leaning back after summing up the cow shot with, “It doesn’t matter how they come,” now peered into the ground. “I think there’s a message for Yusuf Pathan, Danny. A bit late in the day, I must say.”

Morrison, like thousands around him, had been glued to movements far more pleasing to the male eye than the sprint of a substitute cricketer. Now, looking at the interaction taking place between Pathan and 12th man Debabrata Das, he exclaimed, “If it is a message, Ravi, it’s a mighty big one.”

Indeed, Das was in the process of handing over a huge, fat, well-thumbed book to the batsman.

“I sure hope Pathan knows which page it is on,” chimed in Harsha Bhogle, glancing at his watch. He was due for the post innings summing up in a couple of minutes.

On field, Billy Bowden was incensed. It was not every day that someone upstaged him in performing peculiar antics on the ground. But here, Pathan was coming tantalisingly close. One hand grasping the great big book, the other was in the process of ransacking his pockets.

“If it was not Yusuf Pathan, I would have said he was looking to play copybook,” Harsha observed.

Soon, however, a piece of paper emerged from one of Pathan’s pockets. Ominously A4 and crumpled. A collective gasp escaped the BC Roy Clubhouse.

“I dare say he is doing a Ramdin here,” Shastri shouted into the microphone as Pathan unwrapped the sheet and held it high, in front of the thick volume.

“Could you tell me what it says, Ravi?” Morrison tried to read the words but they seemed to make no sense.

Shastri looked at the pictures on the television, now zooming in on Pathan’s hands.

“It says ‘BHEJA NAHIN KHANEKA’,” Shastri shot an alarmed look at his colleague from New Zealand. “Danny, do you suppose the television audience asked Pathan to pass a message to us?”

“What does it mean?” Morrison asked. “I keep hearing something like that wherever I go.”

Meanwhile Harsha was trying to make out the name of the book behind the sheet. To his dismay, it seemed way too big to be Out of the Box, more in the dimensions of Out of my Comfort Zone.

“It looks like a telephone directory,” he concluded uncertainly. “Yes, I can make out Calcutta Telephones on the cover. I wonder if Pathan is trying to tell us that he has got the bowler’s number. Or is he overjoyed at finally making connection? It sure does not ring a bell.”

It was only when Gautam Gambhir addressed the press during the post match briefing that some light was thrown on the mystery of the cryptic message.

“I know Denesh Ramdin had been fined for his gesture, but there is no chance of that happening here,” the KKR skipper remarked. “Yusuf has been endlessly hounded by criticism for not middling anything. It was his way of answering his critics.”

When asked about the curious use of a telephone directory, Gambhir explained, “It was much easier for Ramdin. He had only Viv Richards to counter. These last few days, wherever Yusuf has gone, KKR supporters have harassed him with their jibes. The entire city seemed to be up in arms against him. How could he write down the names of all the people of Kolkata?  Hence, the telephone directory – a brainchild of Rudi Webster.  All the people of Kolkata addressed in one gesture as soon as he got a big one.”

Asked which big one he was referring to, Gambhir clarified, “One big hit of course, not an entire innings.” As an afterthought he added, “Critics of big innings … You can’t expect us to support a gesture with an entire library.”

Why Laxman isn't the demi-god that Dravid, Tendulkar & Ganguly are?