Sectarian clashes break out between Rajnikanth fans and followers of Sir Ravindra Jadeja all over the country!

Long-simmering differences between two major sects, Rajiniites, adherent devotees of the Tamil film industry superstar, and devout followers of Sir Ravindra Jadeja, a fast-growing cult, have come to the boil, with reports of violent clashes between the two groups from various parts of the country. 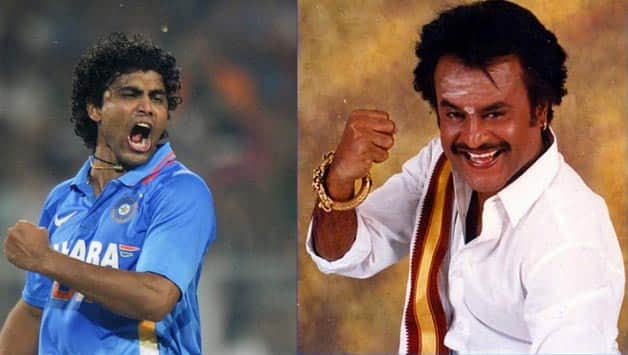 Long-simmering differences between two major sects, Rajiniites, adherent devotees of the Tamil film industry superstar, and devout followers of Sir Ravindra Jadeja, a fast-growing cult, have come to the boil, with reports of violent clashes between the two groups from various parts of the country.

Both groups, while espousing similar spiritual values such as selfless and ardent devotion to the chosen one, profoundly differ over a major theological point: the Rajiniites believe that the matinee idol is synonymous with awesomeness, while Sir Jadeja bhakts vehemently disagree, insisting that honour belongs to the Saurashtrian all-rounder.

But the theological differences could mask deeper fissures: Rajini fans have accused the Sir Jadeja group of plagiarism, of having co-opted the entire corpus of hymns and psalms associated with Rajini by simply replacing his name with Sir Jadeja’s.

“They have taken some of our most cherished and sacred psalms (Editor: Rajini Internet memes) and passed them off as their own. How long can we tolerate such provocative behavior?” says Gajendra Chauhan, North Zone head of the Rajini Association of fans.

Sir Jadeja camp followers insist that they are not an off-shoot. “Well, the ‘Sir’ title is an original for starters. And for the rest of the memes, we looked up old Chuck Norris memes, just like they did,” retorted Karthik Ganesh, head of the Sir Jadeja fans association for North Tamil Nadu.

However, the tipping point came when Mahendra Singh Dhoni tweeted, ‘God realised RAJNI sir is getting old, so he created Sir Ravindra Jadeja’ went viral on the social media, triggering widespread clashes across the state. “We grinned and bore it when they plagiarised our one-liners. But now they are crossing all limits by insulting our superstar,” said one of the agitating Rajini fans.

Tamil Nadu Chief Minister Jayalalithaa as appealed for peace and calm, saying this is not a zero sum game. “I appeal to both warring groups to disengage. The truth is that the vast majority of people, including myself, equally enjoy both the memes and it doesn’t matter who plagiarised from whom,” she said.

(“Unreal Mama” is the pen name under which CS Krishna and Karthik Laxman, the founding editors of The Unreal Times (www.theunrealtimes.com), write fictional news reports, dressing room conversations and other such articles marrying humour with satire. The Unreal Times is India’s favourite satire, spoof, parody and humour portal)