Sehwag’s new batting approach could do India a world of good.

There are few batsmen in international cricket who can clinically destroy any bowling on any type of wicket as effortlessly and as consistently as Virender Sehwag. Not since the days of Viv Richards has a batsman evoked so much fear in the opposition ranks.

But that Sehwag may well be a thing of the past. Maturity, they say, comes with age. Sehwag is 32 and has been in international cricket for 12 years. Indication of his changing mindset was his comments just before the start of the 2011 World Cup: “I have never played 50 overs in one-day cricket. The maximum I have played is 43 or 44 overs. But this time I will try to bat 50 overs and give a good start to the team. I have been unsuccessfully trying this for the last 10 years and the effort is still on and will be there.”

Sehwag a stayer! Well, the surprise factor was not for long. He almost achieved his stated intent in the World Cup opener against Bangladesh, falling in the 48th over.”Runs are not an issue when Sehwag is at the crease. I have been telling him about the need to bat the full 50 overs because it’s not just a personal benefit for him but also a great boon for the team and country,” Amar Nath Sharma, Sehwag’s coach from his formative years, told in a chat with CricketCountry.com.

Sharma, who first spotted Sehwag at the Government Boys School ground at Vikas Puri in West Delhi when he was just 14, feels that Sehwag would do well to restrain himself once he garners enough in an over.

“Just a week before the World Cup, I spoke to him about the importance in exercising self-control. I told him, ‘If you have got 12 or 13 in an over, don’t venture into the risky shots.’ But he says he feels excited to have a go at the bowling even if he picked up 10-12 an over.’ He is very aggressive…it’s difficult to contain him. No bowler can contain him,” Sharma says matter-of-factly.

The coach is pleased with his pupil for staying at the wicket till almost the end of the innings against Bangladesh. “I told him to bat the same way. At least he is trying – that is important, though it’s a different matter that he missed out after getting promising starts against England and Netherlands.”

Sharma has no doubts that Sehwag is crucial to India’s plans to win the World Cup. “Look, if Sehwag bats for even for 30 overs, let alone batting the full 50 overs, India would win the match. Take it in writing from me.”

If there is anything that is causing concern to Sharma, it’s the Indian bowling. “Our bowling is weak. Our batsmen must look to post at least 350 because with our bowling attack you never know what to expect. You saw it against Bangladesh. If we had got bowled out for 300, who knows what might have been the fate of that game.” West Indies ride on Smith, Pollard to ease past Ireland 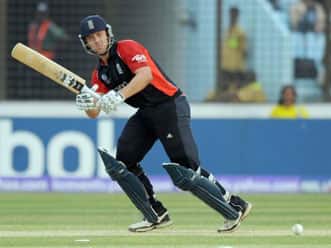