One was an all-rounder who started a publication that became synonymous with cricket. Another was a philosopher, statesman and President of India with a deep love for the noble game. Arunabha Sengupta traces two men born on September 5 who curiously combined cricket and academia. 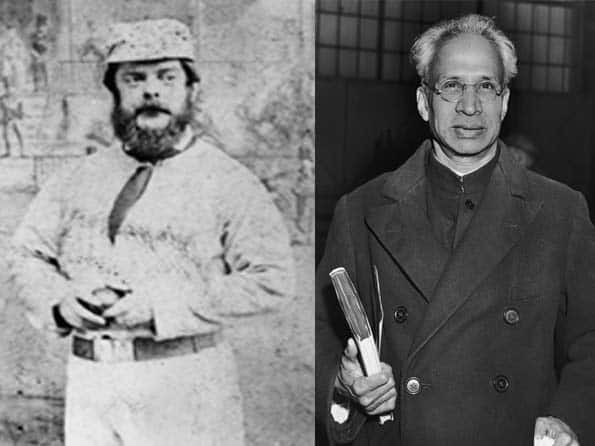 John Wisden (left), founder of the Wisden Cricketer’s Almanac, the cricketing Bible, was born on September 5. On this very day in 1888, four years after the death of John Wisden, was born Dr S Radhakrishnan (right), the second President of India who had a deep love for cricket. In fact, he is the great grand uncle of one of India’s legendary batsman. © Getty Images

One was an all-rounder who started a publication that became synonymous with cricket. Another was a philosopher, statesman and President of India with a deep love for the noble game. Arunabha Sengupta traces two men born on September 5 who curiously combined cricket and academia.

September 5 — memory is stirred into a heady mix of cricket and books. On this day in 1826 was born a cricketer to whom we are in immense debt, for almost all that we know about the history of the game.

Standing at only five feet six inches, John Wisden nevertheless became one of the best fast bowlers of his era, running in with a relaxed action followed by very accurate deliveries. He was a good batsman as well, with an extremely straight bat.

According to the leading batsman of that era, Fuller Pilch, Wisden was the finest of all-rounders. At Lord’s in 1850, playing for North versus South, he claimed all 10 wickets in the second innings, each one of them clean bowled!

In 1859, along with the six-hitting Nottinghamshire skipper George Parr, Wisden took a team of English cricketers to Canada and USA, playing in Montreal, Hoboken, Philadelphia, Hamilton and Rochester.

He gave up the game at a relatively early age of 37, mainly due to frequent attacks of rheumatism. However, his immortal feat was performed next year, in 1864, when he launched the Wisden Cricketers’ Almanack.

Wisden passed away in 1884, but the publication lives on, compiled year after year, as the veritable Bible of cricket, the refuge of scholars and historians associated with the game.

The cricketing view of life

Yet again on September 5, four years after the death of Wisden, was born Dr Sarvepalli Radhakrishnan — philosopher, scholar and statesman who went on to become the second President of India.

Among his many glittering academic achievements came the post of Spalding Professor of Eastern Religions and Ethics at the University of Oxford, where he was elected a Fellow of All Souls College in 1936.

And it was during that summer that he would sneak off from the city of dreaming spires, and come down to Lord’s to watch CK Nayudu bat for the Indian cricket team.

It was largely due to his initiative that Mushtaq Ali was honoured with the Padma Shri in 1963. It remains uncertain who ended up more delighted when the legendary batsman received the honour from the President.

The other curious cricketing connection of Dr. Radhakrishnan is that his great-grand-nephew turned out to be a pretty useful cricketer. Born five months before Dr. Radhakrishnan’s death, VVS Laxman managed to play 134 Tests for India.