Retiring from the game is something which every cricketer has to do one day in his career but coming out of retirement and playing is something very rare.

With every passing year, many cricketers announce their retirement from either of the international format or from overall cricket. Retiring from the game is something which every cricketer has to do one day in his career but coming out of retirement and playing is something very rare and Pakistani cricketer Shahid Afridi is quite infamous for that. He might be known for the same but many people forget that it was not him who did that first. Since Afridi is once again about to retire from cricket, Abhishek Kumar presents a list of eight popular cricketers who came out of their retirement.

He retired from the game in 1968 after representing Australia in 52 Tests but came back to international cricket in 1977. Simpson was probably the first one to come out of retirement but there was a specific reason behind his comeback. It was Kerry Packer’s World Series Cricket (WSC) in the 70s which severely depleted the Australian side and almost a decade after the retirement; Simpson captained the national side at the age of 42 against India. Australia eventually won the series by 3-2 and Simpson scored 539 runs at 53.90 with four wickets and six catches in that series. He later played one more series as captain in the Caribbean against West Indies which the hosts won by 3-1 and Simpson was replaced by Graham Yallop.

Famous for his dashing personality and style, Imran is arguably the greatest captain of Pakistan cricket team. He made his international debut in 1971 and announced his first retirement post 1987 World Cup but Pakistan’s President Zia-Ul-Haq insisted him to come back and he did in style by winning the World Cup in 1992.

If Imran is the greatest captain of Pakistan team, Miandad is the greatest batsman of all time from the nation. Famous for his last-ball six to Chetan Sharma in 1986 against India, Miandad is considered to be among the most genius batsmen of all-time. Like Imran, Miandad also made a comeback from his retirement but he did so in the span of only 10-days after the then Pakistan Prime Minister Benazir Bhutto asked him to play for the team till 1996 World Cup. Miandad scored only 54 from three innings of the tournament and finally ended his career at the age of 39.

This former Caribbean cricketer announced his shocking retirement three weeks before the 1999 World Cup but made a surprising comeback in 2001. Like Simpson, Hooper came back in the side and captained the West Indies team in 2003 World Cup. West Indies failed to progress to the second round after some miserable performances in the first round of tournament. Despite that, Hooper was retained in the side but this time, he pulled himself back and finally retired from the game as he wanted a youngster in the team instead of him.

After the sacking of Heath Streak from Zimbabwe as captain in 2004 because of him being a white player, several cricketers threatened to quit the game. Since Streak was not re-instated, Grant Flower announced his retirement along with 13 other players. Later, after six years in 2010, Grant made a return to Zimbabwe team and surprised everyone. Alastair Campbell wanted him to play till 2011 World Cup but he pulled out because of his poor form and ended his international career in 2010.

This legendary Kenyan all rounder first retired from international cricket after 2011 World Cup but later he was called back by his board in 2013 at the age of 42. He came back and represented Kenya in both One-Dayers and Twenty20 International (T20I). His last international match was against Netherlands on January 23, 2014.

Out of nowhere, this maverick English batsman suddenly announced his retirement from limited-overs format in 2011 in order to focus only in Tests but after few months, he made his comeback and is yet to announce his final retirement from international cricket.

This Pakistani cricketer is more famous for his comebacks after retirement than as a cricketer. Afridi, who is considered to be among the best all-rounders of 21st century, started his retirement and comeback saga in 2006 by announcing his temporary retirement from Tests but came back in 2010 and that too as captain. He led the side only for one Test and announced his permanent retirement from Tests. After Tests, it was time for One-Day format and Afridi did the same there too by announcing retirement after 2011 World Cup citing differences with coach Waqar Younis. This time again he made a comeback to ODI side towards the end of 2011 and played till 2015 World Cup under the leadership of Misbah-ul-Haq. Now, only one format was left for Afridi and that is T20I, from which Afridi is all set to retire as per the reports as he may play his final international against West Indies in UAE, which is expected to be a solitary farewell match. 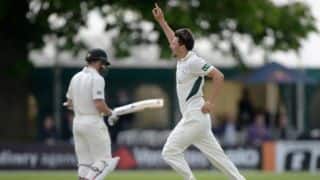