Shakib had hit 10 boundaries and carried on the innings with utmost poise.

Shakib Al Hasan hammered 101 and also picked up a four-wicket haul in the first One-Day International (ODI) to lead Bangladesh to an 87-run victory against Zimbabwe. In the process Shakib became the 12th batsman to hit a ton and take four wickets in the same ODI. Varun Arora sheds light on his performance in the match.

Chittagong roared as Shakib Al Hasan completed yet another century for Bangladesh on Friday. This was his sixth ODI century and his third at home. It was also his comeback game to the ODI setup after he was banned by the Bangladesh Cricket Board (BCB) for a period of six months which was later reduced. In the absence of Shakib, Bangladesh suffered a 3-0 loss in the series they played against West Indies.

This win also ended a dismal string of losses for Bangladesh as they had failed to win any in the format in the year 2014 till this game. Shakib’s contribution came just at the right time, and it will add confidence to the team. On Friday, Shakib had a pivotal role to play. He came out to bat at No. 5 when Bangladesh were 31 for three.

Shakib built his innings slowly, caressing the ball all over the field for singles while also collected the occasional boundaries. He didn’t falter as his partner Mominul Haque was dismissed in the 20th over. Shakib and Mushfiqur Rahim came together and stitched 148-run partnership for the fifth wicket, which brought the Bangladesh innings back on track. In his innings of 101 off 99 balls, Shakib hit 10 boundaries and carried on the innings with utmost poise. He was dismissed by Tafadzwa Kamungozi as tried to hoick the leg-spinner for a six, but was caught at long-on.

Below is the list of the players of who scored a ton and picked a four-for in the same match: 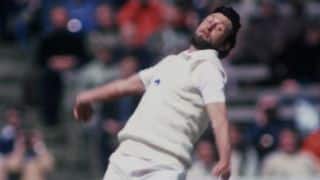