On February 11, 2003, one of the biggest drug-related scandals in sport came to light when Australian spin master Shane Warne tested positive for a banned substance prior to the World Cup opener against Pakistan. Jaideep Vaidya revisits those trying times for one of the most popular and scandalous cricketers of the generation. Shane Warne arrives for a press conference on February 12, 2003, at Melbourne Airport after being asked to return to Australia prior to the start of the 2003 World Cup in South Africa. Warne had tested positive for a banned substance © Getty Images

On February 11, 2003, one of the biggest drug-related scandals in sport came to light when Australian spin master Shane Warne tested positive for a banned substance prior to the World Cup opener against Pakistan. Jaideep Vaidya revisits those trying times for one of the most popular and scandalous cricketers of the generation.

Often referred to as one of the greatest cricketers of the present era, Shane Warne is also one of the most controversial. In a 15-year playing career, Warne has been embroiled in scandals galore — all of his own doing. From leaking information to a bookie, to lying about having quit smoking, from numerous extra-marital romps across the world to ugly altercations with contemporaries on the field, Warne was and still continues to be daily fodder for red-topped tabloids across the globe. He’s shot himself in the foot on so many occasions, it’s a wonder the man doesn’t have a limp.

Probably the biggest and most damaging scandal — career wise — associated with the leggie was one that got him banned for a year from the sport. A few days before Australia began their defence of the ICC World Cup in 2003, Warne failed a drug test. He was alerted while in Johannesburg that the urine test he had given in January that year had tested positive for hydrochlorothiazide and amiloride – banned diuretics that are often used to mask the effects of steroids. The Australian team physio at the time, Errol Alcott, who came to know of it shortly after Warne did, said, “One of the biggest stories in world cricket is about to break.”

Warne had already been involved in a “match-fixing” scandal in the mid-90s, when he supplied pitch and weather-related information to an Indian bookie. He had lost the Australian vice-captaincy in 2000 when a phone sex affair with a British nurse came to light. The same year, he was given $200,000 to quit smoking and was caught on camera by a schoolboy puffing away. On almost all occasions, Warne had resorted to the defence that it was his personal life and the public had no affair to intervene, which was paradoxical considering he was a public figure.

But this time, it was no personal affair. And it was big. Being tested positive for drugs is bound to have serious repercussions on public life. Warne knew it and decided to come clean about it. In a press conference a few days later, he accepted that he had taken a “fluid tablet”, but feigned ignorance over the fact that it was a banned substance. He then resorted to what became one of the most popular my-dog-ate-my-homework excuses when he said it was his mom who had forced him to take the tablet in order to look leaner and fitter.

It was no secret that Warne had weight-related issues back then, which is a total contrast to the lean, deflated version that romances Liz Hurley today. Chubby faced and portly, Warne had, apparently, heeded to his mother’s “badgering” and popped the pill. However, he said he had no idea the drug was prohibited.

“I was shocked and absolutely devastated to be informed by ASDA (Australian Sports Drug Agency) yesterday that a test sample which was collected in Australia on the 22nd of January indicated the presence of a prohibited substance,” Warne told the Australian Associated Press later.

Warne pleaded innocence, saying, “I’m shocked because I have not taken performance enhancing drugs. I did take a fluid tablet before my comeback game in Sydney. The tablet is supposed to dehydrate you and rid your body of any excess fluid. I didn’t know it contained any banned substance.” 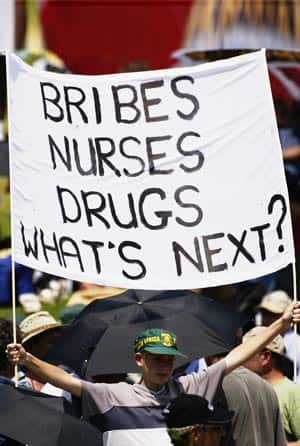 Eventually, it wasn’t good enough as Warne was banned from playing on an international and domestic level by the Australian Cricket Board (ACB) for a whole year. Surprisingly, for all the shock he had expressed at the accusation earlier, Warne decided against appealing.

“Although I find this penalty very harsh and I am extremely disappointed that this has happened, I have decided that I no longer want to put my family under even more stress,” he was quoted as saying by the BBC.

“Enough is enough. I have decided to take the decision of the committee on the chin and try to move on and deal with it the best way I can,” he added.

Take it on the chin he did. Warne even said that the year he was losing in the ban would be regained later. “I think it will help me in the long run,” he said at a gathering of Australia’s Test cricketers in Sydney. “I think I’ve still got two or three years left in the game. Having this year off is probably going to help me add on another year at the end of my career.

The determination and resolve was there to be seen, and Warne was true to his word. In his comeback series, he scalped 26 Sri Lankans in three Tests, and followed it up by taking 96 wickets the following year, which was a world record. He played for three seasons before retiring in 2007, after Australia whitewashed England in the Ashes. On the way, Warne went on to become the second-highest wicket-taker in Test history after Muttiah Muralitharan, taking 708 wickets in 145 matches at an average of just over 25.

Gideon Haigh sums it up well in his biography of controversy’s child, On Warne, “As we have seen, the suspension proved a baggy green blessing in a diuretic disguise, for the last three years of Warne’s career were as glorious as the rest.”

Following are his career bowling figures before and after the ban. Note the slightly improved average and drastically better strike-rate:

“Captain. Leader. Legend” is how the Stamford Bridge loyals describe their talismanic captain, John Terry. If a similar tagline had to be made of Shane Warne, it would probably read: Cricketer. Superstar. Legend.

There is no doubting the fact that Warne will remain one of the most celebrated cricketers of all time. No matter what his off-field antics, on the green turf, the man terrorised batsmen. It is as if the man lives two identities, two lives, if you may. He was, at different points in his career, one of Australia’s most loved and hated cricketers. “Hated” might even be too harsh a word to describe the Australian public’s taking of him. He might have been controversy’s child, he may have done wrong things and might continue to do so, like the Marlon Samuels saga, but Warne was and is nothing less than a superstar.

This writer will leave it to Haigh to sum it up again.

“Warne fast became Australia’s number-one cricketer. He also, just as quickly, became its only genuine cricket ‘personality’. This was confusing. We are commonly taught to distinguish between true fame, rich and nourishing, based on genuine accomplishment, and junk fame, the too-sweet, too-salty, empty calories of celebrity, a paltry and perishable substitute. Warne radiated both, creating two broad and parallel streams of news, one based on what he had done, usually on the cricket field, and the other derived from who he was, usually off it. There were exceptions, and intersections, but Warne lived both existences to the full, as a star sportsman, and a sporting star.” 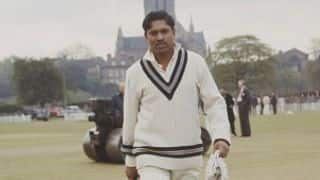