Pollock made his Benson & Hedges debut in 1996 for Warwickshire.

It was Shaun Pollock s first match for Warwickshire. He had still not won his county cap. The Benson & Hedges tie at Edgbaston, if anything, was supposed to be Pollock s acid Test for his new team. There high hopes from the 23-year old fast bowler, a lot of which had come from his South African teammate Allan Donald, the spearhead of the County till the previous season, then playing in the Lancashire League.

Dermot Reeve won the toss and put Leicestershire in. He gave Pollock first over (ahead of the senior professional, Dougie Brown); Pollock bounced almost immediately, and Vince Wells hooked: the ball flew to Dominic Ostler at extra-cover. First blood.

Pollock later said in an interview with The Independent: That first wicket in my second over helped to calm me down. I had a few nerves to start with playing for my new county, but I was happy with the pitch which seemed to do a bit although this sort of thing isn’t going to happen all the time.

Greg Macmillan, at the other end, was joined by Ben Smith. Pollock was extremely difficult to score off, and Brown supported him well. Macmillan did not stand a chance before him, and Leicestershire ambled to 9 for 1 after 6 overs. Little did they know that more was to follow.

Pollock had meanwhile conceded a solitary run off his first three overs. Macmillan survived the first ball of the fourth, but the next one shot up at a rapid pace; the ball brushed something on its way (the glove, as the umpire must have thought) and flew to Reeve at first slip. Replays, however, suggested that the ball had hit his elbow.

James Whitaker, the Leicestershire captain, walked out to face a peach next delivery. He played forward to one he must have thought would leave him; instead, the ball darted into him, hit his pad, and crashed into the off-and middle-stumps. Leicestershire were 9 for 3 and in tatters.

As Peter Robinson walked out there was a hush around the stadium: could their new overseas recruitment actually take a hat-trick on debut? Pollock bowled short of good length, and Robinson played only half-forward; the ball took the edge, brushed the pad, and flew to Andy Moles at short-leg.

A hat-trick! On debut! Could it get any better?

The third batsman in a hat-trick is almost always under tension: but what happens to the man who comes after the hat-trick? Darren Maddy was made a tentative push at one that left him; the ball was too quick for him, and Ostler took a fine, low catch at third slip. Pollock s figures read an unreal 3.5-2-1-5, oddly reminiscent of Courtney Walsh s 4.3-3-1-5.

Thankfully, Paul Nixon s wicket remained intact at the end of the over. Leicestershire were left reeling at 9 for 5. Nixon played a few strokes before Pollock had him caught by Moles at slip; he bowled unchanged to finish with excellent figures of 10-5-21-6.

Gordon Parsons hung around to help Smith (who top-scored with 61) add 81 for the seventh wicket. After both fell in quick succession, David Millns and Tim Mason added 59 in quick time, and the tourists finished on 181 for 9 in 50 overs. As a triumphant Pollock left the field, he found Donald waiting for him with the youngster s Warwickshire cap in his hand.

Alan Mullally started the response on a high, removing Nick Knight for a duck. The Smiths Neil and Paul put up a fight before both fell in quick succession, leaving the hosts on 56 for 3. Leicestershire may have sniffed a chance at this stage, but Ostler (68*) and Trevor Penney (68*) settled down, scoring off the remaining runs with over 15 overs to spare.

It was an incredible County debut for the youngster. He did not get to keep the ball, though: Dermot has got it off me as he wants it for his benefit. You see, I ve got to keep on good terms with my captain.

You can t get everything, you see.

– Since Pollock four others have taken 4 wickets in 4 balls; Lasith Malinga remains the only one to have done it in an ODI (or any international cricket). Pollock himself became one of Malinga s victims.

– Warwickshire were knocked out in the semi-final of the tournament; Leicestershire did not make it to the knock-out stage.

– Pollock played for Warwickshire till 2002. 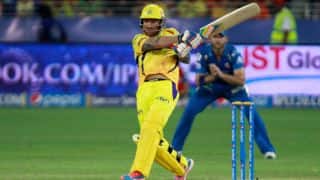