The opener faced a total of 621 deliveries to post scores of 138 not out and 86 against NSW.

Being away from red-ball cricket for nearly a year – 336 days, to be exact – has apparently had little impact on Cameron Bancroft who in his return to first-class cricket came very near to breaking a record held by Australian legend Steve Waugh.

Back in Western Australia‘s starting XI as the Sheffield Shield resumed following the BBL break – in which he returned to competitive cricket at the end of his nine-month ban – Bancroft became the first batsman since the turn of the century to face in excess of 600 deliveries in a Shield game.

In facing 621 balls for his innings of 138* and 86 at Bankstown Oval, Bancroft came within 28 balls of equalling Waugh’s record of the most faced in a Shield match.

Opening the innings for Western Australia in his first first-class match since the Cape Town Test in March 2018, in which he was found guilty of ball-tampering and banned alongside his captain Steve Smith and fellow opener David Warner, the 26-year-old carried his bat during the team’s first innings, facing 358 deliveries, and then scored 86 from 263 balls. (READ MORE: Cameron Bancroft hits century on first-class return)

As detailed by cricket.com.au, this makes Bancroft the first man to face as many – and the fourth most of all time – since the former Australia captain Waugh in 1996 set the mark of 649 balls when batting for New South Wales versus Queensland. (READ: Bancroft keen to resume opening with Warner despite scandal)

All told, across two innings at the crease Bancroft batted 788 minutes – which is over 13 hours.

It took NSW 621 balls to finally get the wicket of Cameron Bancroft and this is how they got it. NSW defeat WA by an innings and 51 runs. #NSWvWA: https://t.co/AeSUzWYhZi pic.twitter.com/M2kGamtOkK

Once he was dismissed in WA’s second innings, a collapse of four wickets in 11 balls saw NSW win the match by an innings and 51 runs.

As per cricket.com.au, Bancroft’s 621 balls faced is the fourth-most in Shield cricket and surpassed his own record for WA, that of 567 balls faced against NSW in 2015. He is also the only batsman in Sheffield Shield history to face more than 550 balls in one match on two occasions.

Bancroft completed his nine-month suspension in late December and has since played Twenty20 cricket for Perth Scorchers in the BBL.

After the Sheffield Shield ends, he will travel to England to play for Durham. Runs there could boost Bancroft’s chances of returning to Australia’s Test squad for the Ashes. (READ: No rift with David Warner: Bancroft) 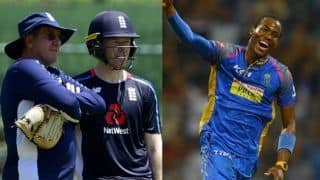