Brendon McCullum gave a fine finish to his innings as he knocked 145 from mere 79 balls on Day 1 of 2nd Test at Christchurch on Saturday.

When New Zealand skipper Brendon McCullum was playing his last international match at Christchurch every person was wanting to see the last jig of this crackling player. McCullum gave a fine finish to his innings as he scored 145 from mere 79 balls. He earned two records along the way — fastest century in 54 balls in Test cricket alongside peppered the boundary at his audacious best and smacked a world record most sixes in Tests. He has toppled Australian cricketer Adam Gilchrist with most Test sixes. Just when we wanted to see him playing more, he was dismissed with round of applause with entire stadium showing immense respect. Soon after the Kiwi batsman completed his innings, twitter exploded with bundles of mixed reactions of whether McCullum should reconsider his retirement plans? Is New Zealand ready to be led by Kane Williamson? FULL CRICKET SCORECARD: New Zealand vs Australia, 2nd Test at Christchurch

If we go back to August 2015, when two big names in cricket known for their performance, Kumar Sangakkara and Michael Clarke, retired from international cricket, it was a huge blow for Sri Lanka as well as Australia. When Sangakkara came to play on the 4th Day of Test match against India at Colombo, India had set a target of 413 and the entire stadium knew they were going to watch the Lankan legend play for one last time. Every person in Sri Lanka and fans of Sangakkara took a moment to applaud as he made way in the crease. Pretty similar to what McCullum experienced today with Australians giving the honour just before he began his innings.

But Sangakkara faced disastrous end to his 15-year career as he was out for 18 and none celebrated the wicket — not even the Indian team — as it turned to be a moment of disappointment. At the time of retirement, Mahela Jayawardene clearly mentioned “It was not to be in this match but what he was for Sri Lanka cricket is something that you can’t take away. Very proud of you mate.” Indeed it was a proud moment for every Sri Lankan. Sangakkara does play for T20 leagues around the world and viewers are still happy to continue watching him play cricket in some form. READ: Kumar Sangakkara’s replacement will be difficult to get: Angelo Mathews

Clarke on the other hand was willing to retire amidst the Ashes debacle after the fourth test in Trent Bridge ended on its third day, as the tourists lost the match by an innings and 78 runs. Clarke mentioned how he spoke to his best friend Shane Warne regarding confusion with regards to his retirement and changed his mind just when Australia were just learning to connect the dots under Clarke’s captaincy. The international career of a great player ended in disappointment, as Australia surrendered the Urn to their bitter rivals. Soon England sealed the Ashes 3-1, with a game to spare

At one moment Australians were disappointed to see their leader retire from International career, while the audience were eagerly waiting to view Clarke back on screens to play for Big Bash League 2015-16. Kevin Pietersen mentioned on his tweets, “See you in Melbourne as our skipper, @MClarke23! Magnificent career! Be real proud of yourself! T20 train is LOTS of fun!” Clarke still plays for domestic cricket in Australia but when he retired, Australia were in a rebuilding stage after some key players retired and required a captain to console the loss against England in an event like Ashes. READ: Michael Clarke: Thought long and hard about retirement

Similarly, New Zealand were very much at high point after their win against Sri Lanka under McCullum’s captaincy in recently concluded Test series. As they say performance speaks for itself, New Zealand require performers who can continue this talent in the coming mega event of ICC World T20 2016. McCullum took over from Ross Taylor, when New Zealand coach felt Taylor was not playing well which was not enough for him to lead the national side. McCullum turned out to be the favorite for Mike Hesson very soon and was wanting to hand over One-Day International (ODI) and Twenty20 (T20) captaincy to him. Today, Williamson has shown excellence in his performance in Test cricket with recently bagging the Sportsman of the Year at the Halberg Awards. Questions did arise if Williamson deserved the Halberg Award. Though at such a young age Williamson is all set to take over the reins from McCullum, one feels that McCullum’s presence can make the difference in huge event like ICC T20 World Cup. READ: Here’s why Kane Williamson deserved the Halberg Award for New Zealand sportsman of the year

It is a question that rose in every mind on Saturday after watching the perfect innings from McCullum. Every person wanted to see more of it and every Indian as well wished to see McCullum play for the ICC World T20 2016. Will re-considering retirement from every format help in building the team to next level and is this right moment to leave the side? With World Cup just around the corner, will new Zealand manage to put up a good fight without McCullum? Fans will however be eagerly waiting to see McCullum play in the Indian Premier League (IPL) 2016, for his new team Gujarat Lions. 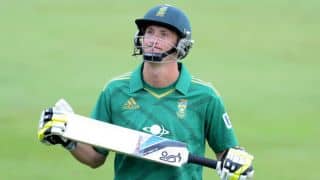 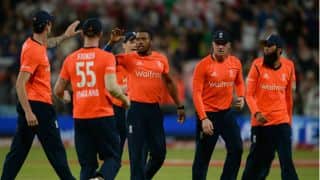 South Africa vs England 2015-16, 2nd T20I at Johannesburg: 5 visiting players to watch out for