Mohammad Hafeez’s journey as captain began in July, 2012, when he was appointed in-charge of the Pakistan Twenty20 (T20)  team. A few months later, the team participated in the ICC World T20 in Sri Lanka in 2012.

Though Pakistan made its way into the semi-finals by securing victories in the initial rounds, they had to face defeat in the semis against the host team, by 16 runs. Pakistan had to return back home, empty handed, despite reaching so close to the trophy.

During Hafeez’s captaincy, Pakistan T20 cricket has seen many glory days. He has the record of winning the most number of T20 matches as a Pakistani captain. He led Pakistan to whitewash the West Indies in the T20 matches of 2013 and also helped improve winning percentages for the team.

Hafeez, however, has been struggling for the past couple of months; he has not been able to deliver his best and his body language seems pretty down. It looks like he has lost his mojo.

The recent series against South Africa in the United Arab Emirates (UAE) was a nightmare for him. He seemed helpless against Dale Steyn’s attacks, falling prey to the South African time and again.  Steyn even lost interest to celebrate after getting Hafeez’s wickets.

In the last 11 T20 matches, Hafeez has scored 237 runs at an average of 21.5 and managed nine wickets (including two in the last seven games) at an economy rate of six.

If we look at his performance in One-Day Internationals (ODIs), in the last 15 games he has scored 458 runs (almost 30 runs on average) and managed to get just seven wickets. Nothing significant.

In the recent T20 games against Sri Lanka and the only T20 match against Afghanistan, Hafeez had a chance to improve his form and get some momentum back into his style, as those attacks did not have somebody of the class of Steyn. Yet, he failed to impress.

The thought uppermost in the mind of the selectors would be: Should Hafeez be asked to lead Pakistan when his own form and confidence is at a low ebb?

Shahid Afridi is a valid option should Hafeez be relieved of the captaincy. Afridi is in good shape and has the ability to lead the team in difficult situations. We saw a gladiator in Afridi the last time he was captain.

(Zainul Abideen is a mechanical engineering graduate from UET who loves to write and travel. His Twitter handle is @teemgreeen. The above article is reproduced with permission from tribune.com.pk) 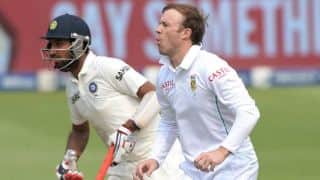