Sky Sports and 'We didn't Start the Fire': What do the words mean?

Sky Sports and 'We didn't Start the Fire': What do the words mean?

The visualisations are as spectacular as a Terminator movie and Gower’s singing skills remind one of John Lennon’s abilities with the bat.

Sky Sports has come out with a viral promotional video — the commentators tuning in to a customised karaoke version of ‘We didn’t Start the Fire’ — before The 2015 Ashes. Abhishek Mukherjee takes the readers through the lyrics and a trip down memory lane. WATCH VIDEO: The Ashes 2015 promo: We didn’t start the fire!

Sky Sports is all geared up for the latest edition of The Ashes, a thimble-sized brown urn that is supposed to have been around since before Shivnarine Chanderpaul had made his Test debut, which is saying something. They have taken a Billy Joel song, roped in Elio Pace, and have pooled in the entire pool of commentators to go on with the karaoke.

While the visuals are as spectacular as a Terminator movie and Gower’s singing skills remind one of John Lennon’s abilities with the bat, the mind-boggling, Shakespeare-humbling, cricketer-and-event-listing lyrics steal the show.

Let us go through the quagmire of the lyrics, elaborating step by step.

Donald Bradman: The ultimate anti-Chris Martin who killed the sport. Scored 974 runs in 1930, which is 973 more than Marvan Atapattu scored from his first five innings.

Peter May: It is unfortunate if you are surnamed after a month and do not get to play a single Ashes Test in the month. Famous for marrying a Test captain’s daughter, strolling around when Jim Laker took 19 for 90, being called aloof by Laker three years later, and being bowled by Benaud at Old Trafford in 1961. Also scored some runs, but nobody cares.

At The Oval, final day: Let alone the country, The Oval is not even the most glamorous Test ground in London. However, it had three interesting last days: 1882, when a demon knocked stumps around and English cricket died; 1902, when Wodehouse decided to quit his banking job; and 1968, when a lot of spectators played apprentice to the ground-staff.

Little urn: The Ashes, dude, The Ashes. The brown little urn they have been retaining and regaining.

Bob’s perm: Hairdo of the man who could cure insomnia with the microphone and win Tests with the ball. Took 8 for 43 at Headingley 1981. Was born Robert George Willis, but added Dylan as his middle name. It’s a Bob’s world, you see.

WG Grace: A man born with a beard reaching his chest and a belt around his waist. Was a great all-rounder, but Gen X thinks he is a fat old man who was a contemporary of Gautam Buddha. Had once left six men to score 32 runs.

Walter Hammond: Was a lady-killer despite having a middle name Reginald. Scored a few runs. Took up a job at Marsham Tyres to lead England. It made him so happy that he didn’t declare till England scored 5-0.

Mitchell Johnson at The Gabba: A man so shy of displaying flesh that he covers himself up with tattoos, moustache, and piercings. Jonathan Trott doesn’t like him after The Gabba.

Chris Broad: Scored three hundreds in England’s last Ashes win in 18 years. Did not teach his son to walk.

Ponsford: More prolific of the two Bills who opened batting for Australia. Scored 300s. Even 400s. Had a middle name Harold. Once got smashed black and blue by a bowler called Harold.

Richie Benaud: Never gloated about the silent D at the end of his surname. Never lost an Ashes as captain. Batted like Sandeep Patil. Smiled like Julia Roberts.

Larwood’s Bodyline: A series that made Larwood and Jardine look so deadly that Lord Voldemort and Hannibal Lecter look like Hansel and Gretel.

Athers slips on 99: The only dismissal at Lord’s where the batsman was on 97, tried to run three with Mike Gatting at the other end as Merv Hughes threw the ball. Enough said.

Laker: Sometimes took 9 wickets in an innings when he did not get all 10. Did not like Peter May.

Jones’ dive: A sad knee injury for a person nicknamed Horse. Made Hussain’s declaration look even worse and dug up about ten pounds of Brisbane earth.

Gower flying in the sky: Gower was flying a Tiger Moth in Brisbane when England were playing Queensland. Went up in smoke himself four days later at Perth.

Baggy Greens: Steve Waugh’s got so worn out that he never managed to sell it second-handed, so he pulled off a clever marketing ploy and made it fashionable.

Swing: Cute little things at playgrounds that are used by children when they don’t make it to an XI.

Seam: A part of clothing that needed to be exceptionally strong when Mike Gatting does his stretching exercises.

Warnie’s ball in ’93: Called the Ball of the Century because both bowler and batsman weighed in excess of a hundred kilograms.

Ricky Ponting, Pratty gets him: A punter run out by a prat, which served him well. The run out also earned Pratt an open-top bus ride in London, something he could have for £10 anyway.

Freddie makes the bails fly: Probably refers to some dismissal that nobody remembers.

’10-’11: A journalist’s delight, for they could come up with the most obvious and ridiculous of puns as Cook got all the runs.

Whitewash: One of the many professions taken up by England cricketers when they were axed following Ashes series in the 1990s.

Nasser, and that toss: Hussain opted to field in 2002-03. England lost the Test and series so badly that a Hussain refused to get that nose surgery done and is stuck with the proboscis forever.

Tubby Taylor: The man at the other end when Michael Slater went about Pommie-bashing. Born to chew gums and push the ball past the bowler. Disliked by all England bowlers in 1989.

Sherminator: Automatic shawarma-maker used by cricketers when they crave for Lebanese food. Has some American Pie reference that only Shane Warne and Ian Bell care about.

Brigadier-block: Paul Collingwood’s only respectable nickname, the others being extremely imaginative ones like Colly, Wood, and Weed. He is also called Shep, because there is a Blue Peter Collie dog called Shep (don’t ask).

Follow-ons, Headingley ’81: The match England keep gloating about even today, though they had done the same in 1894-95 at Sydney. Nobody remembers that, for English cricket did not exist before Ian Botham.

Mark Waugh, Steve Waugh: They are in the song together because they were born on the same day, share a surname, and are twins.

Harmy’s shocking first ball: Would have been called ‘shocking first prom’ had Harmison been an American. The nickname Harmy was almost certainly coined by a Barmy Army bard.

Brett Lee on his knees: The obligatory photograph that comes up whenever phrases like ‘Spirit of Cricket’ are discussed.

Davy Warner: World record holder of the highest average leap after reaching three figures. Is usually called David, but they called him Davy to make rhyme with ‘gravy’, which makes no sense.

Third man: The weirdest name for a fielding position, given that there are no first, second, or fourth men.

Andy Flower’s England: The phase of English cricket when they were coached by the only man with a chin longer than Geoff Lawson’s.

John Snow: A badass who was once manhandled by a guy called Guy. Beat that.

Final Test: An Anthony Asquith movie where Godfrey Evans was not allowed to yell.

Manchester: Where it always rains and Alex Ferguson coaches. No, wait, he doesn’t coach anymore.

Yes, Chef: The most imaginative of all nicknames. Chef for Cook: who would have thunk?

Thommo, Lillee, fierce pace, Bumble smacked in that place: Ask Bumble. They say his box was split in two and was turned inside out. We are told he has been behaving awkwardly ever since. 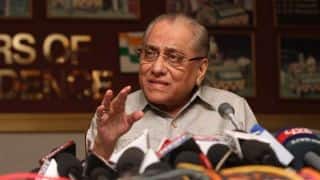