Champions Trophy 2000, being a global event, and staged at one venue, Nairobi, was an opportunity for Ganguly to introduce the raw Zaheer to the wizard Wasim, who was leading the Pakistani attack.

Duleep Trophy final, 2005-06. West Zone squared off against East Zone at Motera, Ahmedabad. Sourav Ganguly, recently stripped of national captaincy and dropped from the Indian side after the infamous Greg Chappell controversy, was leading East Zone. Ganguly needed runs to pave his way back into the Indian team. All he managed was a pair. Zaheer Khan cleaned him up for a 7-ball duck in the first innings and trapped him leg before for a golden duck in the second. West Zone won by 5 wickets and it only made Ganguly s toil harder.

If one bowler has troubled Ganguly consistently then it has to be Zaheer. Luckily for Ganguly, a major part of his career coincided playing together with Zaheer in the national team.

Zaheer made his international debut under Ganguly in the 2000 Champions Trophy at Nairobi. Ganguly was a firm believer in the left-armer s ability and was the rock behind him during his nascent stages as he graduated to be a world-class cricketer. Now, from a champion left-arm pacer to the greatest of them all

For all their feisty battles on the pitch, Ganguly had developed camaraderie with Wasim Akram. At one point of time, under Ganguly s leadership, India had three regular left-arm pacers Zaheer, Ashish Nehra and Irfan Pathan.

During India s tour of Australia in 2003-04, Ganguly had requested Wasim, who had retired by then and was Down Under for media assignment, to help out his young left-armers. Wasim obliged.

Despite the political differences, Ganguly made many friends in Pakistan. Inzamam-ul-Haq, Waqar Younis, Shoaib Akhtar, Zaheer Abbas, Imran Khan, Saeed Anwar and of course, Wasim, are the ones Ganguly has written about being friends with, in his book A Century Is Not Enough.

Wasim Akram was another Pakistani great I admired. I was very keen on roping him in as the bowling coach of the Indian team. I have not seen a greater magician on a cricketing field. They say he was the Sultan of Swing. I beg to differ. To me, he was the shopping mall of pace bowling. You could get whatever you wanted. Maybe because of the troubled Indo-Pak relations, my attempts to get him as the bowling coach for the Indian team didn t succeed. But for our pacers who needed help he was always just a phone call away, Ganguly writes in his book.

When Zaheer broke into the side in 2000, he broke the Indian stereotype of pace bowling. He was more about pace and had made a reputation to fire-in yorkers, something novel in Indian pace battery. Champions Trophy 2000 was a global event and was staged at one venue, Nairobi. It was an opportunity for Ganguly to introduce the raw Zaheer to the wizard Wasim, who was leading the Pakistani attack.

Ganguly writes about the amusing meeting: Once I had taken Zaheer Khan to meet Wasim in Nairobi during the Champions Trophy. In his customary tongue-in-cheek fashion, Wasim asked, Do you drink?

Zaheer, talking to a legend, could only think of the obvious no.

Wasim was not impressed one bit. He thundered, How will you be a fast bowler if you do not smoke? If you do not drink .

We burst out laughing.

Wasim s verbal bouncers may have felled Zaheer but he had impressed the great. Harsha Bhogle recently mentioned about an incident from that tournament: We were in Nairobi. We were just walking around, waiting around for the lines to come up. Wasim Akram was walking by, Pakistan were playing the next day. He just passed by and we got talking about Zaheer Khan and he said, Woh jo aapka naya fast bowler hai na, bhejo mere paas, (That new fast bowler that you have got, send him to me).

In a 14-year-long international career, Zaheer ended up with 610 international wickets. Instrumental in several overseas Test wins, Zaheer was one of the architects of India s 2011 World Cup triumph.

As for Ganguly, he finally got to work with Wasim in the same camp: I did manage to get Wasim to advise Irfan Pathan before he played his first Test match in Adelaide. Eventually I managed to rope in Wasim as the bowling consultant of Kolkata Knight Riders. 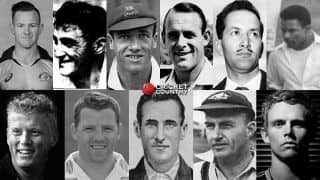