Even God is a three-letter word. Looking at it as an abbreviation, it may be assumed as: G for Generator, O for Operator and D for Destructor.

There s something special about the number three . Three Khans (Aamir Khan, Shah Rukh Khan and Salman Khan) have consistently ruled the Bollywood since 1990s. In the hit movie Dil Chahta Hai, the story was about three friends. Alexandre Dumas famous novel The Three Musketeers was about a troika. In cricket, we had the Three Ws (Clyde Walcott, Everton Weekes and Frank Worrell) who ruled West Indian cricket. The list goes on.

Even God is a three-letter word. Looking at it as an abbreviation, it may be assumed as: G for Generator, O for Operator and D for Destructor. Aren t the three phases for basic existence?

Now let s see it from a Hindu perspective. Brahma is considered to be the creator of the Brahmand [Universe], thus a generator. Vishnu takes care of operating it and Shiva with an open third-eye, is known to be the eternal destructor.

What is the point? What has this got do with Indian cricket? The turn of the millennium saw a new chapter for Indian cricket. The curve that began to gradually rise in the mid-90s witnessed a steeper growth post 2000. The foundation laid back then made Indian cricket the fort that it is today. Administrators to cricketers may have played a role in this, but three men Gods to many fans have made unparalleled contribution to a sport the only unified religion in this country.

The generator of Indian cricket is Sourav Ganguly. It s been almost seven years since he has retired from the game, but there are fans, who still swear by him and desperately want him to take the reins of Indian cricket as the Team Director. For such frenzy there has to be a reason and a strong one. Once hailed as the God of off-side for his flowing stroke-play on the off-side, Ganguly took over the captaincy reins in 2000, when India were probably witnessing their worst cricketing phase. The match-fixing saga broke out and top players got banned. With trusts broken, many fans turned cricketing atheist.

The task that the young 27-year-old Bengali had was not just winning back the trust but also build a team that won more games abroad. That would not only help them erase the tag of Tigers at home , but also make India being perceived as a top international side. Ganguly did all the must-not dos in Indian cricket. The zonal biased selection was put to rest. What followed were the inusion of talented cricketers like Harbhajan Singh, Virender Sehwag, Zaheer Khan, Yuvraj Singh, MS Dhoni, Irfan Pathan, Ashish Nehra, etc. Ganguly backed, stood by and mentored them as their careers propelled to new highs with every passing calendar.

India were a team of talented individual gentlemen and Ganguly taught the side the lesson of tit for tat . He infused aggression in the youth; his men hit back when sledged. Andrew Flintoff came to India and stripped his shirt and waved it in celebration. Ganguly did the same in the holiest of cricketing holies Lord s. Ganguly wore his heart on his sleeves. After all, he was called Dada for a reason; he was truly an elder brother and leader. Under him, India began winning away from home and reached the final of the World Cup 2003. The players he groomed went on to lift the cup under Dhoni in 2011. Dhoni, another inspiring leader, enjoyed the crops from the seeds that were sown by Ganguly.

Under Ganguly, India won more matches away from home than what they had in their history of almost 70 years in international cricket. Be it the renaissance of Harbhajan and VVS Laxman or Sehwag s route to one of the greatest openers, Ganguly deserves the credit for his faith and vision. Under him, a bunch of talented but directionless individuals playing for the Indian cricket team became a cohesive unit called, Team India .

The operator in the triumvirate is Rahul Dravid. Has there been a bigger team man than him? Asked to perform the most challenging roles, Dravid would be the first to raise his hand and more often excelled. Ganguly s friend and deputy for years, he was the Queen of the chessboard. Behind almost every successful Ganguly triumph, it was Dravid s performance that took India to the peak. Undeterred by circumstances or conditions, Dravid focused on the task at hand and operated quietly behind the scenes not worried about the hullabaloo that surrounded their celebrity status.

Dravid in Indian cricket s dictionary stands for all the goodness with the meaning varying from fierce concentration, meticulous hard work and world-class performer. Dravid, who retired from international cricket in 2012, captained after Ganguly in 2005 and operated the team pretty well. Back into operations, he is now the coach of India A and the under-19 side, where is responsible for working behind the scenes and presenting the nation with the finest talents.

The destructor? Well no prizes for guessing this as he has the official status of God in Indian cricket. There s no bowling attack in the world that Sachin Tendulkar hasn t conquered. A Bharat Ratna in its literal sense, he donned the national colours for 24 years and gave India cricket the kind of respect it never had earlier on the global stage. Tendulkar s impact on the game itself is next to none. While Ganguly built the side, Dravid played the silent role, it was Tendulkar s mastery with the willow that had the unique ability to enthral, entertain, inspire and yet scare the fiercest of opponents. Attributes of Shiva, aren t they? Had he been the God that he is referred as, it would have been a lot easier for him but what makes him a true gem is the fact that he achieved all of it being a mortal.

Tendulkar was the binding force and an inspiration, and Ganguly and Dravid took a lot of confidence from his presence. An institution in himself, Tendulkar with his dedication and skills stirred the side as they stepped onto the greens to demolish the opposition but yet in the most graceful manner.

The trio, often referred during their playing days as Tridev , not only helped Indian cricket reach heights but also the fan following kept on increasing. The successes saw more brands investing in the game and by the time they left the arena, the cricket in the nation contributed to 70 percent of the overall game s revenue.

Board of Control for Cricket in India (BCCI) is a powerhouse. With the big bucks, seeped in larger egos taking the sports course to the corrupt path yet again. However, the trio have been inducted to the board to improve the overall functioning including the team s performance. Ganguly and Tendulkar are a part of the advisory panel, while Dravid is the coach of the national A and Under-19 side. Ganguly has aided the Supreme Court (SC) appointed panels to investigate the 2013 Indian Premier League (IPL) spot-fixing case and has been given a task to chalk out the road map for Indian cricket.

With corruption making in-roads through the seepages in the board, Indian cricket though may have all the dollars now have lost credibility. With the Gods back in their new avatars, one can hope for another renaissance of Indian cricket and of course towards happier days. 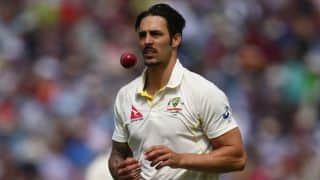 Australian players getting reloaded — and how!