Tarot reader Shruti Chopra looks into her cards to give CricketCountry.com readers exclusive insights into what lies ahead in the IPL matches. In the below piece, she dwells into the Kolkata Knight Riders vs Pune Warrior game - the first IPL match on Saturday. 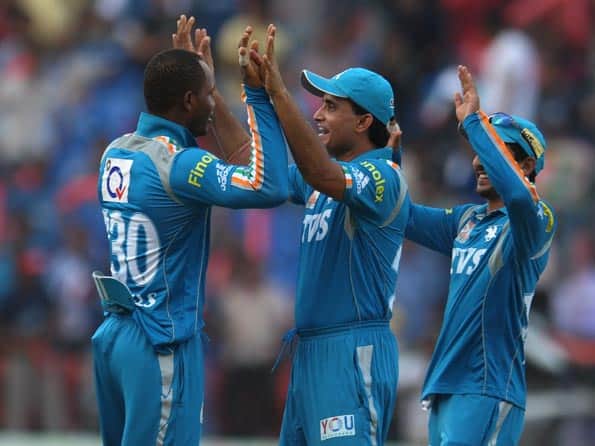 Sourav Ganguly (c) as a captain will bring across positivity as well as strong directions for his team. His leadership can make the difference against Kolkata Knight Riders © AFP

Tarot reader Shruti Chopra looks into her cards to give CricketCountry.com readers exclusive insights into what lies ahead in the IPL matches. In the below piece, she dwells into the Kolkata Knight Riders vs Pune Warrior game – the first IPL match on Saturday.

The Page and Five of Wands shows the Knight Riders coming into this match with well-directed aggression. They wish to assert authority and remain in control. As a team, like the Five of Cups, they will have to face some minor disappointments but will manage to come out of this and perform better. The Knight Riders should also keep a watch on their fielding as it may let them down.

Gautam Gambhir, as a batsman, will be part of a strong partnership. He, like the King of Swords, will come into this game well prepared and would apply this in his batting. As a captain he will be well balanced and will look to extract an all round performance from his team.

Yusuf Pathan will be well planned, stable like the Knight of Cups and be successful. A good day for him.

Brendon McCullum will have a tough day. Hard work and balance from the Hierophant will allow him to steady himself.

Jacques Kallis has a good day ahead. He will be commanding and aggressive in all areas of the game. He’s ready to put up a fight.

Brett Lee will start off with some disappointments and may not be as effective as he would like. Luckily, he will manage to change that round through better balance and be quite miserly in giving away runs.

Iqbal Abdulla will initially be wayward, and he too will strike the right balance. A good day for him too.

The Warriors carry an air of disappointment. To counter this, like the Ace of Wands, they will look to make some aggressive changes and provide the team with better stability. They showcase moments of brilliance, but with the Ten of Wands, they may leave themselves with quite a task.

Sourav Ganguly will be highly depended on. His batting is looking strong, reliant and positive, like the Nine of Cups. As a captain, he will bring across the same positivity, as well as strong directions for his team. His leadership can make the difference today.

Jesse Ryder will come into this game with renewed energy. The Queen of Wands is encouraging as it shows him being aggressive and positive with his batting.

Steve Smith has all the tools to succeed today. He will work hard, apply himself and bring the team some strong results.

Michael Clarke will do the basics well. He will provide the team with the right direction.

Ashish Nehra will have a stable day and will, like the Star be able to bowl with good direction. He should be careful with his last over.

Ashok Dinda has the Death card. He has the ability to change the situation and make it favourable for his team.

Murali Karthik will be overly aggressive at times, but like the Three of Pentacles, he will be creative with his bowling plans too.