Though South Africa suffered a 0-2 drubbing at the hands of the mighty Australians, they will leave no stone unturned to avenge the loss.

Expect more fireworks, banters and tussles on a cricket field as Australia tour South Africa for a three-match Twenty20 International (T20I) series. The last time these two arch rivals faced each other in the shortest format was in March 2014. Though South Africa suffered a 0-2 drubbing at the hands of the mighty Australians, they will leave no stone unturned to avenge the loss. Australia, on the other hand, were white-washed by the in-form Indians in a recently concluded T20I series Down Under. Given the rivalry these two flare up, they will play fire with fire and will be at each other s throats. FULL CRICKET SCORECARD: South Africa vs Australia, 1st T20I at Durban

All the banter began in 2014 when David Warner alleged AB de Villiers of ball tampering. Eventually, Warner was fined for untrue accusations. The matter got out of hands when South African speedster Dale Steyn and former Australian captain Michael Clarke had a heated exchange in the third Test of their three-match Test series. However, Steyn did not reveal the exact words Clarke hurled at him, as it would affect the spirit of the game.

The most problematic of all was when South Africa s T20 captain Faf du Plessis called the Australians a pack of dogs . The incident again happened in the third Test. Mitchell Johnson s short delivery hit du Plessis on the pads and rolled towards the stumps. As the ball stopped, du Plessis picked it up and threw it towards Johnson. Australian players thought it s not du Plessis job to pick up the ball. This invoked Mitchell Johnson, Warner and other team members to round him, and eventually gave him a mouthful.

The last T20I encounter between these two nations at Kingsmead in Durban was a seven-over match. Australia edged past South Africa in the final over as veteran Brag Hodge hailed sixes in the ultimate over. READ: South Africa a threat to Australia in limited-overs

This series, tempers will be flared up, words will be exchanged, and deliveries will be sent soaring over of the boundary line. South Africa versus Australia clash today at Durban will be nothing less than an edge-of-the-seat thriller. Winning this series is all that matters for both teams, as they will look to get some wins under their belt, ahead of the ICC World T20 2016.

However, given the kind of players South Africa have, they won t be the ones to start off the banter. On the other hand, Australia won t shy away from the fierce rivalry, and will put their heart to dent South Africa s confidence.

(Kaustubh Mayekar is a reporter with CricketCountry) 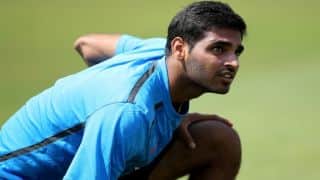