Not many were convinced with the preparation of South Africa, who along with coach Gary Kirsten, bowling coach Allan Donald and mental conditioning coach Paddy Upton, left for a three-day camp at the Swiss Alps. But by grabbing No 1 spot in ICC Test rankings by beating England at home, South Africa made their critics eat their words. 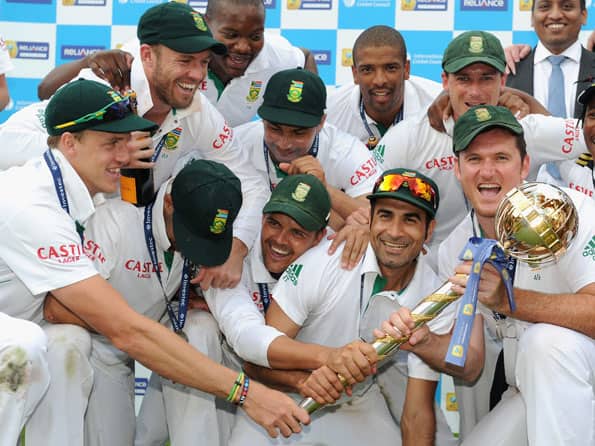 Not many were convinced with the preparation of the 15-man South Africa squad, who along with their team coach Gary Kirsten, bowling coach Allan Donald and mental conditioning coach Paddy Upton, left for a three-day camp at the Swiss Alps, before landing in England. But by grabbing the No 1 spot in the ICC Test rankings by beating England at home, South Africa made their critics eat their words.

South Africa were worthy of being the top side in Test cricket by being on top of the hosts for an overwhelming part of the three-Test series. England, known for their meticulous planning prior to an important series, looked largely clueless right through the series.

South Africa have not been beaten once playing outside their home in last six years and deserve to be at the helm. Graeme Smith and team are blessed with immense talent, calibre, combined with a rich support staff, including head coach Gary Kirsten.

South Africa’s next Test assignment will be a tough challenge – facing a resurgent Australia Down Under. Success against Australia will not only put South Africa in the zone to dominate in the years to come, but will also help them prolong their stay at the top of the summit.

If Australia beat South Africa, they will regain the No 1 spot in the ICC Test rankings. And knowing the kind of overhaul that Cricket Australia went through after the Don Argus review, it will be critical for the home side to stamp their authority once again in world cricket.

But before that, there are a few areas which the newly-crowned side needs to ponder on, as these will only be helpful in maintaining their hold at the ICC Test Championship Mace for long.

Dale Steyn, Morne Morkel and Vernon Philander form an almost-impeccable pace attack, but the South Africans must start widening their pool of fast bowlers. Marchant de Lange has garnered success and can thrive at the international stage. Wayne Parnell also provides lot of hope. But like England and Australia, who have developed a pool of six-seven pacers, South Africa too need to have a rich bank of resources.

Also, South Africa needs to have a spinner for the long haul ahead. At 33, Imran Tahir cannot hope to have a long international career.

Mark Boucher’s unfortunate eye injury, which resulted in him calling quits, has left a big hole in the South African ranks. A veteran of 147 Tests, Boucher was the team’s mainstay and a man to look up to when in trouble. Thami Tsolekile, Boucher’s replacement in the Test squad for the series against England, is 31. Again, someone who does not have age on his side.

Stable opening batsmen and No 6 spot

Jacques Rudolph, ideally an opener, played at the sixth spot in batting line-up in the three Test matches, and he had an ordinary series with the bat, scoring 141 Test matches at an average of 35.25. Also, his struggles against short ball and off-spin were evident during the three-match series.

However, the South Africans can still revel in months to come as they have the most balanced side in Test cricket.

Smith, now a veteran of 94 Test matches as captain, has emphasised on the need of having a pool of players in all departments.

“We need to have a strong base so when the wind blows we can handle ourselves,” he said.

“We need to increase our bowling depth in case we get injuries and have players who can come in and perform. These guys have built a formidable unit but we have Australia next and that will be an awesome challenge for us. Hopefully we can push forward and take control,” Smith added.

But for now, South Africa can sit back and celebrate their ascent to the summit of Test cricket.