South Africa will look to continue their domination by winning the fourth ODI while the Australia will look to end the series on positive note.

The fifth and last One-Day International (ODI) of series between South Africa and Australia will be played at Newlands, Cape Town. Australia has already lost the series by losing all the four matches played so far. They were beaten by the hosts in every aspect of the game. Australian vice-captain David Warner blamed failure of top-order for losing first two ODIs whereas it was their lackluster bowling which costed them the third ODI where they were defending 371. Steven Smith then blamed his inexperience bowling attack but after the fourth ODI, there was nothing to be said from the Australian camp who were once again outplayed thoroughly. FULL CRICKET SCORECARD: South Africa vs Australia, fifth ODI at Cape Town

In the first three ODIs, Australian batsmen performed decently but in the fourth ODI, their batting failed miserably against Kyle Abbott‘s swing and seam along with chinaman bowler, Tabraiz Shamsi‘s devastating spell. The fifth ODI is an opportunity for Australia to end the series on a high with a consolatory win. On the other hand, South Africa will be eyeing for a historic whitewash. As per the record, Australia has been never whitewashed in an ODI series of five or more match and they will try their best not to be the part of such disastrous record. Ahead of the fifth ODI, in here is Australia’s likely XI by Abhishek Kumar:

Top-order: Apart from second and fourth ODI, Australian openers have been decent but not impressive. To win the last match, both Warner and Aaron Finch need to show their power with the bat which has been trademark of Australia’s batting line-up in last few years. After openers, skipper Smith is probably going through a tough phase, both from bat and as captain. Beside one century in third ODI, Smith couldn’t even touch 30-run mark in other three matches. His batting record as captain is quite impressive but in last few months, he has been unable to stitch some big innings. The final ODI will be a test for the captain from all fronts. Nonetheless, the top three batsmen need to perform and if that happen, victory will not be far away from Australia’s grasp.

Middle-order: The middle-order of Australia has been ordinary as well. None of the batsmen have performed consistently. George Bailey and Matthew Wade are experienced batsmen but have not lived upto their reputation. Travis Head‘s failure can be reasoned out on the fact that he has lacked support from the other end. All-rounder Mitchell Marsh has failed with both ball and bat but since there is not much option, Australia will probably go with the same middle-order.

Bowling: Like their middle-order, their bowling has also below par. Be it Mitchell Marsh, John Hastings or spinner Adam Zampa, they have either failed to pick wickets or picked at a high economy rate. It will be a challenging task for Smith to pick two bowlers from the new bunch but after seeing at Australia’s little fightback in the fourth ODI, he may pick the same set of bowlers again which may comprise of Scott Boland and Chris Tremain. Both Boland and Tremain were very economical and did decently in Australia’s six wicket loss. 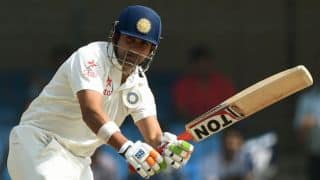