South Africa played magnificently without the services of their regular skipper, AB de Villiers and put up a strong fight consistently to outfox Australia.

The five One-Day International (ODI) series between South Africa and Australia saw the visitors being surprisingly whitewashed by the hosts. The series, which was once expected to be a thriller turned out to be a dull affair as Australia failed to put up a fight and never tasted success in the entire tour. Though one may argue saying that Australia were not playing with their full strength but the fact that they failed to taste success even on a solitary occasion is baffling. South Africa played magnificently without the services of their regular skipper, AB de Villiers and put up a strong fight consistently. In fact, this was the first ever 5-0 whitewash for Australia in a One-Day bilateral series. It s a series downfall for a champion side like Australia. Full Cricket Scorecard, South Africa vs Australia, 5th ODI

Australia started off well in the first ODI, where they managed to post a total of 294 but Quinton de Kock inflicted some serious damage on the young Australian bowlers and won the game single-handedly for his side. The remainder of the series was just one way traffic as Australia failed to show any resistance and collapsed like nine pins. They failed to step up as a unit and their batsmen did not manage to cover up for the inexperienced bowling. They needed runs for their inexperienced bowlers to defend but that was not the case all the time.

Barring the fifth ODI at Cape Town, there wasn t any moment of glory for the Australia, where they almost pulled of a thriller riding on David Warner s incredible outing. The maverick left-hander smashed 173 while chasing 328 and threatened to take the game away from the opposition but was unfortunately dismissed in the 48th over of the game. Australia have had a torrid time across formats in the current calendar year. Whitewashed by India in Twenty20 (T20I) series, demolished by Sri Lanka in three-Test series and stunned by South Africa in ODIs corroborates the belief. As the series has concluded its result, with Australia landing up on the receiving end, we present you with the mark sheet of Australian players.

Warner played with unmatched confidence in the entire series and had couple of centuries to his name. He got his team off to a flying start on four out of five occasions but the middle-order did not manage to capitalise on the start. His run in the fifth ODI was inspiring as he almost managed to take his team past the finish line. Warner scored 386 runs in the entire series at 77.20 at a blistering strike-rate of just over 113.

Finch failed to get things going at the top and his failure cost the team massively. His responsibility was to get the team off to a good start but failed to do so and floundered at crucial junctures. He only managed one fifty in five outings. He is one of the key players in the Australian line-up but did not get going in this series.

Bailey is among the veterans in the side and was expected to a lot more than what he delivered. Bailey played a tenacious knock in the first game but apart from that, there was nothing substantial from him. His bare runs column in the middle-order was one of the main reasons behind Australia s miserable run in the ODI series.

Marsh came out to walk when the team was in deep trouble but couldn t do much with the bat. His bowling was also not up to the mark as he managed to earn only four wickets. It was a golden opportunity for him to leave a mark in the side and lead the pace attack in the absence of their strike bowlers but he failed to do so.

Head played well and got good starts but failed to convert it into big scores. He came out to bat mostly when the team was under the pump. He got a fifty and couple of good starts but needs more time to establish himself in this format.

Like many other Australians, Wade too didn t enjoy a fruitful run in the bilateral ODI series as he garnered just 114 runs from it. He had the opportunity to make his chances count and score big when his team needed the most, but it was not the case.

Hastings did a decent job as an all-rounder but his poor show in the fourth encounter saw him being dropped from the final game at Cape Town. His batting was good on couple of occasions but didn t deliver on a consistent basis. He did well with the ball in phases but Australia needed him to take more responsibility in the absence of their frontline bowlers.

Zampa possess immense skills as a bowler, his wily leg-spin can win his side matches if it clicks. But Zampa certainly did not manage to impress in this tour. With just three wickets to his name he did no good to the Australian side and will have to step up in order to survive the brutal competition.

Tremain kept improving with every game and for a debutant to do so is huge. Tremain had wickets to his name but leaked runs. He was difficult to bat against when the pitch had some assistance. Tremain needs some time to settle down and looks promising. He also displayed some batting skills, which could well work in his favour for upcoming assignments.

Worrall had a golden opportunity to make his presence felt but he failed to do so in couple of chances which came his way. He remained wicketless in both the games and leaked runs at Durban.

Boland bowled well at Centurion and had three wickets to his name but failed to get any wicket at Port Elizabeth. He was picked for the final game where he had two scalps by conceding 68 runs. 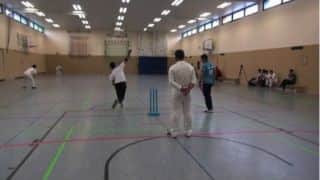 Sanath Jayasuriya: Sachin Tendulkar, Virat Kohli have their own styles