South Africa will play against Australia in the 7th ODI of the tri-series in West Indies and try to maintain the momentum from their last match.

South Africa will play against Australia in the 7th match of the tri-series in West Indies. The match which will be played at the Kensington Oval, Bridgetown as the tri-series gets into its final phase or the Barbados leg if we can call it. The Proteas after finding themselves on the bottom of the Points Table, jumped to the top spot after they beat the home team, West Indies by 139 runs in the last match. Australia, on the other hand, are not far behind either. They will also look at sealing the win against AB de Villiers and his men today. Although, with momentum on their side and a recent clinical win in their bag, South Africa won’t be easy to beat. Here’s a look at what could be their team for the clash. LIVE CRICKET SCORECARD: Australia  vs  South Africa , 7th ODI Match at Barbados

Top Order: With Hashim Amla and Quinton de Kock in top-form South Africa will feel comfortable and relaxed about their opening pair atleast. Amla’s magnificent 110 in the last match, was always forthcoming given the kind of touch he looked in when the series began. What was good to see was that he played a couple of cheeky shots as well to increase the run-rate. De Kock might have looked like he played second-fiddle, but his contribution was vital as well and it laid the foundation for the other batsman to come in and hit from the first ball. Chris Morris can be promoted up the order if the situation demands so, or Faf Du Plessis can nonetheless make most of his current form. In short, South Africa’s top-order is the real deal at the moment. ALSO READ: Tri-Nation series 2016, 7th ODI, Australia vs South Africa, Preview and Predictions: Both teams eyeing a place in final

Middle Order: How many times does it happen that when the top-order is getting runs, the middle-order does not get the chance to impress in the same way. Quite a lot. However, it is not that AB de Villiers and JP Duminy have not got a chance to score plenty or win games for the Proteas. It is just that they have not been able to make it big. De Villiers has got starts. But has not been able to convert them into milestones. Duminy has also not been able to make it count, but a valuable knock from the two might not be far away. Farhaan Behardien might retain his place in the squad as well, however he will have to prove himself again like he did in the 3rd match of the tri-series against Australia scoring 62 in a low-scoring tie.

Lower Order and Bowling: The spin department has been the main reason for South Africa’s success in the tri-series so far. With 19 wickets between them, Aaron Phangiso and Imran Tahir have led the bowling attack on spin-friendly conditions pretty well. Tahir’s 7 wicket haul in the last match against West Indies was a proof that he is perhaps one of the world’s best leg-spinners at the moment. His googlies were hard to pick for the West Indies batsmen and they struggled big time against him. Tabraiz Shamsi’s inclusion in the spin department adds more options for De Villiers. The pace department though will have to take responsibility against Australia as the pitch at Kensington Oval might not offer as much turn as we have seen in the earlier matches. Kagiso Rabada and Wayne Parnell will have to step with early wickets therefore and send Australia on the back foot. Morris too will have to chip in with his overs.

To sum up, South Africa might play the same team they did in the last match against West Indies. 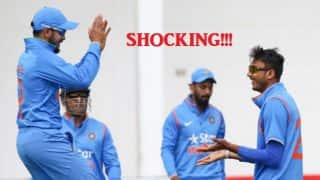