South Africa with this victory completed a 2-0 T20I series victory over England.

South African cricket team pulled-off another victory in the Twenty20 International (T20I) series and whitewashed England 2-0. Like the previous game, South Africa were once again chasing but this time the total was quite a little more competitive. Winning the toss, Proteas invited England to bat first and after going strong for most part of the innings, they lost their last seven wickets in just 14 balls and were all out for 171 in 19.4 overs. South Africa chased down this total very easily, winning by nine wickets and 32 balls to spare. With this match, once again many records were set and broken. As always, Abhishek Kumar brings you 10 interesting statistical highlights from the 2nd T20I of the series at New Wanderers. FULL CRICKET SCORECARD: South Africa vs England 2015-16, 2nd T20I at Johannesburg

1.    English batsman Jos Buttler scored 24-ball 54 and became the third highest individual scorer in a T20I against South Africa from England. The previous two highest scores are of Eoin Morgan (85 not out) and Paul Collingwood (57).

2.  171 is the second highest total by England against South Africa in T20Is

4.   Partnership between Eoin Morgan and Jos Buttler of 96 runs for fourth wicket is now England’s  second best partnership against South Africa. Their previous best partnership of 98 runs between Paul Collingwood and Morgan also came in the same ground on November 13, 2009.

5.   AB de Villiers completed his half-century in just 21 balls, which is now fastest fifty by any South African in T20Is. Previous quickest fifty was also scored by De Villiers in 23 balls against England in 2014.

6.   South Africa’s 88 for no loss in power-play (first six over of the innings) is the third highest in T20Is after Netherlands 91 for 1 and New Zealand 90 for three.

7.   Opening partnership between de Villiers and Hashim Amla for 125 runs is their third highest for first wicket in T20Is and fifth highest for any wicket by any South African pair.

8.   Chris Jordan conceded 48 runs from his 2.4 overs, which is the most expensive spell by any bowler against South Africa, who has bowled at least three overs or less in a T20I.

9.  South Africa chased down the target of 172 in just 14.4 overs with nine wickets in hand, which is the second quickest run chase of 150-plus in the history of T20Is. Quickest chase of more than 150 target was done by Netherlands against Ireland in 13.5 overs on March 21, 2014.

10.  This was England’s fifth consecutive loss against South Africa across formats and their second worst sequence against Proteas. England had lost eight consecutive matches (all One-Day Internationals) from January 1996 to May 1998. 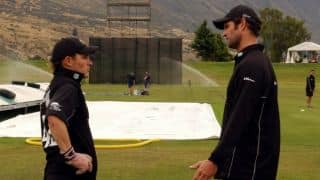 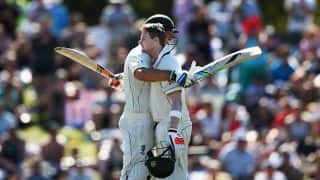