Day Two saw some spirited performances from Sri Lanka and South Africa as they clashed against each other in the 1st Test.

Day Two saw some spirited performances from Sri Lanka and South Africa as they clashed against each other in the first Test at Port Elizabeth. The day in its totality went in favour of the bowlers as seaming and swinging conditions prevailed over a dull Day One. Most South African and Sri Lankan batsmen struggled against the moving ball, while few batsmen took on the challenge and proved that proper technique and patience can guide them to safety. It was a seesaw day with both teams losing and gaining momentum one after the other. The home side was the most pleased of the teams as they held a marginal lead over the visitors by the end of day s play on Day Two.

South Africa uncanny collapse: Starting the day on 267 for 6, South Africa were all out for 286. The hosts imploded like a pack of crackers as Sri Lankan pacers used movement to good effect. It was only Quinton de Kock who stood tall, scoring 37 valuable runs with the tail. South Africa lost as many as 4 wickets for just 19 runs in a span of 9 overs. South Africa were undone by the tidy line and length of Suranga Lakmal and Nuwan Pradeep who did get some help in the air with the wind blowing across the stadium.

Sri Lanka s poor start: Sri Lanka continued what South Africa had started, giving away wickets to poor shots. Dimuth Karunaratne, Kusal Perera and Kusal Mendis were all guilty off playing away from their body against the moving ball. Kyle Abbott and Vernon Philander used the assistance in the air to get results bowling probing lines that enabled batsmen to make frequent mistakes. Two of the wickets came off extremely wide deliveries that were flashed upon hard by Perera and Mendis.

Angelo Mathews resistance: Amidst all the wickets falling, Angelo Mathews found the perfect moment to strike form. Mathews coming back from an injury showed absolutely no signs of it playing with composure and calmness, with few instances of madness. Mathews left everything outside the off stump line against the moving delivery much to the delight of the Sri Lanka fans. Mathews firstly struck crucial stands with Kaushal Perera and Dinesh Chandimal Mathews stood for a hard-fought 69 deliveries making 39 runs.

Dhananjaya de Silva resilient knock of 43*: With half his team down and out in the dressing room, Dhananjaya de Silva came out in the middle to resurrect their innings. De Silva was not the most fluent of the batsmen in the middle, but he dropped the anchor and batted with a smart head over his shoulder. He snitched a small 36-run stand with Herath bringing his team much closer to South Africa s score.

De Silva soon opened his arms and went on the attack as soon as South Africa brought in their spinner. He looked well set for his 3rd Test half-century before early stumps was called after bad light stopped play. 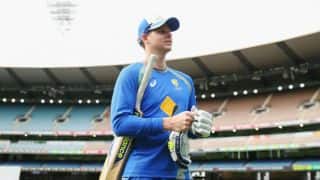