The tie at the Wanderers Stadium is of most importance for Sri Lanka, who will want to stay afloat in the series courtesy a win, while South Africa will undeniably eye a series conclusion.

After the T20 International (T20I) series win over South Africa, Sri Lanka were expected to put up a decent fight in the One-Day International (ODI) series, which sadly has not been the case. Sri Lanka and South Africa are currently engaged in a five-ODI affair which is in favour of the hosts by a margin of 2-0. AB de Villiers, who returned to the helm of affairs for South Africa in the first ODI has been spot on so far, wherein substitute Sri Lankan skipper Upul Tharanga has found it difficult to inspire his troops in the 50-overs format. The tie at the Wanderers Stadium is of most importance for Sri Lanka, who will want to stay afloat in the series courtesy a win. Meanwhile, South Africa, will undeniably eye a series-sealing victory at the iconic Johannesburg ground. Let us have a read into what could be some of the key battles from this vital match. Full Cricket Scorecard: South Africa vs Sri Lanka 3rd ODI at Johannesburg

Hashim Amla vs Suranga Lakmal: Amla has had a decent series so far for himself, going by his numbers. A fifty in the first ODI, followed by a mere 15 is not how one would imagine Amla’s scores to read. Amla looked in great touch at Port Elizabeth. Whereas in Durban was humbled by Sri Lanka’s spearhead Suranga Lakmal. Lakmal has been the visitors’ most potent weapon so far on the tour. Lakmal’s ability to extract bounce on any given surface is a boon for any side. The Amla-Lakmal rivalry looks well poised to start a series of engaging battles between both the teams.

AB de Villiers vs Lakshan Sandakan: South Africa’s comeback man in international cricket, de Villiers has been in red-hot form since his arrival. De Villiers scored a whirlwind knock of 33* at Durban, which only shows his hunger for runs. On the other hand, Sri Lanka’s chinaman Sandakan, has been exhibiting his skills to the tee. Sandakan will be expected to outfox de Villiers with his change in trajectory and pace, while the latter will definitely want to crack the young lad’s confidence. Faf du Plessis eyes big runs on 100th ODI for South Africa

Wayne Parnell vs Upul Tharanga: This has been Parnell’s series so far when it comes to fast bowling. The lanky left-arm pace man has picked 5 wickets so far at 16.40. Tharanga, who has been off the money with the bat needs to get back to his sublime best if Sri Lanka are to win any match from here on. Tharanga to his credit has been undone by South Africa’s terrific fielding.

Kagiso Rabada vs Kusal Mendis: Rabada, in the series against Sri Lanka, has been off-colour so far picking just the one wicket in two matches. Rabada, undoubtedly can rattle any batting line-up; and an inexperienced Sri Lanka unit is just the icing on the cake. Kusal Mendis, on the flip side, has been the Lankan Lion’s mainstay on this African Safari. Kusal can play key anchor role in the top of the innings and guide Sri Lanka to a respectable score.

Imran Tahir vs. Dinesh Chandimal: Leading wicket-taker in the series so far, Tahir will be hopeful of yet another repeat show from Port Elizabeth, where he picked 3 wickets for 26. Chandimal, who strangely was not named Sri Lanka captain, displayed brutes with the bat at Durban. Chandimal was not shy to use his feet against the spin, scored freely all-around the park. 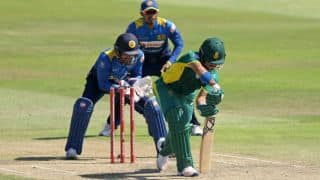 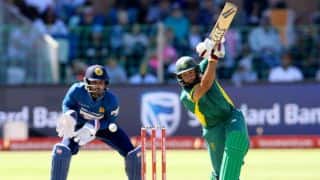