Dane Piedt achieved the feat when he dismissed Mark Vermuelen off his maiden Test delivery.

Dane Piedt of South Africa who made his Test debut against Zimbabwe in the ongoing Test took with the first ball he delivered. He became only the second South African and 19th player overall to achieve this feat in Test Cricket. Bharath Seervi lists the players who achieved this in the past and also shows the career statistics of those players.

On the first day of the Test match between South Africa and Zimbabwe, debutant Dane Piedt achieved a remarkable feat by getting a wicket off the first ball of his international Test career. When he was asked to bowl by his Hashim Amla, it was 16th over of the match. The batsman against him was Mark Vermuelen.  He trapped the batsman in front of the wickets and umpire’s finger confirmed the celebrations for the debutant.

Dane Piedt is only the second South African after Bert Vogler to achieve the distinction of grabbing a wicket of the first ball of Test career. Bert Vogler did it more than a hundred years ago, in January 1906. Overall, before Piedt 18 players got to this feat. The last player before Dane Piedt to do this was Shaminda Eranga of Sri Lanka vs Australia in 2011. The table below provides complete details about the players taking wicket of their first ball of Test career.

Players taking a wicket of the first ball in Test career

The figures column denotes the bowling figures by the particular bowler in the inning.

First player to do so was Tom Horan of Australia against England at Sydney in 1882/83. In the Test match between England and South Africa in Johannesburg in 1905/06, the same feat was achieved by two players.  In the first inning, Bert Vogler making his debut dismissed another debutant from opposition Ernier Haynes. And in the second inning the debutant from England Jack Crawford dismissed Bert Vogler. Nilesh Kulkarni of India took wicket of the first ball of the Test career and then he finished the inning with figures of 1/195 in the match.

What is in taking wicket on career’s first ball?

A player’s performance cannot be judged by single delivery or single match. Similarly, a player taking a wicket on career’s first ball doesn’t conclude of any greatness. Hence, let us see how those players fared in their Test careers.

Having said, most of the players who took wicket of their first ball in Test career did not have the greatest of Test careers. Let us hope a better career for Dane Piedt ahead. 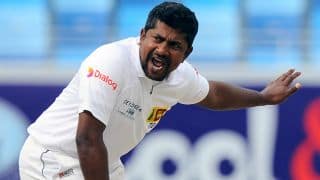