Both Kamlesh Nagarkoti and Shivam Mavi have been picked up by Kolkata Knight Riders in the IPL player auctions.

We are in a parallel universe. We have seen it before, but something is counter intuitive. In the middle, at Mount Maunganui, are battling India and Australia in their opening game of the 2018 U-19 World Cup. The punctual sun is taking our leave. This scenic beauty, too, gives us a familiar feeling, but something remains peculiarly illusion.

The ball takes off. The wicket keeper has to summon his best jump to pouch it. The batsman is dumbstruck, looking back to perhaps confirm if it is a tennis ball. Are there pebbles on the pitch?No, there are no blemishes. The batsman tries to move on. More dot deliveries gives him a scare. His team needs to score over 6 RPO. He doubts his senses. He is not ready for this. And then, the speedometer flashes a number: 149 kmph. We have seen Shoaib Akhtar bowl at 161.3 to Nick Knight in 2003 World Cup. This, again, has nothing newness painted on it, but this seems like a conjuring trick. The commentators are not ready for this.

The bowler is 5 9′ tall, but the height has nothing to do with pace. He turned 18 last month. He must be blessed that he can hurl a ball at this speed at such a young age, but don t Australians have this reputation already? Except, he is not an Australian. He is Kamlesh Nagarkoti, an Indian.

There is also Shivam Mavi, an inch taller than Nagarkoti. He clocks a meager 3 kmph lesser in the match. The two speedsters take 6 wickets between them. India win by a margin of 100 runs.

If this parallel universe indeed exists, the Indians must have a great time in this cosmic catastrophe.

On that day, three pacers bowled 140 plus, of which only one was Indian. Times have changed. This is no parallel universe we have been yearning for. This is reality.

“We thought spin definitely would be their strength. They were pretty sharp. I guess they bowled not only quick but also accurate, they were pretty tough to get away,” explained Australian opener Jack Edwards.

Of course, spin remained India’s main ammunition. Anukul Roy, slow left-arm orthodox bowler, has taken 12 wickets at 7.91, the most by an Indian and fourth-most overall in the tournament. But, Mavi and Nagarkoti continued destroying the defences: they both average 15, with an economy of slightly under 4.

Sourav Ganguly, one of the commentators for the event, was so excited that he tweeted marking Virat Kohli and VVS Laxman.

@imVkohli @VVSLaxman281 @BCCI keep an eye on two under 19quicks ..mavi and nagarkotti ..bowling at 145 in newzealand ..brilliant ..

Later, the duo were picked by Dada s home IPL team, Kolkata Knight Riders. They are rich now, and will be even more famous if they manage to emulate their nippy performance in the final against the same opposition. Australia, however, will be ready this time.

They have seen enough of Nagarkoti and Mavi since the fortnight. Having said that, it is the same track that the Indian duo had ground the hapless Australians to dirt on. There’s no shadow of doubt that the batsmen will be yet again taken for a ride.

We will be in that parallel universe again, where the Indians pacers will cause fear in the hearts and minds of the Australian batsmen. 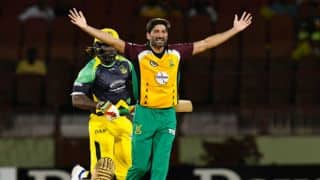 West Indies' domestic season to start with CPL in August